WINSTON-SALEM, N.C. — Maybe one of North Carolina’s most famous products, the brilliant novelist, Thomas Wolfe, had it all wrong. Perhaps a fella really can go home again.

This week it was flamethrower John Isner, another Gate City native who “looked homeward” as Wolfe might write and helped christen the inaugural Winston-Salem Open on the Wake Forest University Tennis Center’s new stadium center court Saturday with a come-from-behind, 4-6, 6-3, 6-3 victory over qualifier Julien Benneteau.

With his mother, brother, and numerous other family members and friends on hand in Winston-Salem, the 6-9 Isner unleashed 19 aces — the hottest checking in at a toasty 139 mph — to collect his second title of the year.

“I don’t know if this tournament could have asked for a better inaugural champion than one of its own,” said respected tennis commentator Mary Carrillo, calling the finals for CBS from New York rather than Winston-Salem due to Hurricane Irene, which as Carrillo spoke was battering the rest of the state east of the Triad.

Carrillo’s was a sentiment that had been widely expressed throughout Simpson’s popular win a week ago at Sedgefield. Indeed, when the trophy presenter said Isner had won the inaugural event in his hometown, the Greensboro Page High School and University of Georgia star did not correct him on the slight misspeak.

“It’s the Triad. It’s all the same,” said Isner with a laugh. “These fans were incredible. I never thought there would be a tournament in my hometown, and now that there is, of course, I was always going to come here to play, but I didn’t know how well I would do. Now to come here and win — I’m happy that it went so well. These fans were fantastic.”

The iron man, Benneteau, ranked 113th, was playing in his ninth match in eight days, including a wild semifinal win over 10th-seeded Dutchman Robin Haase 3-6 7-6 7-6, during which Benneteau saved a pair of match points in a final-set tiebreak he clinched 8-6 — less than 24 hours before he played the fifth tournament final of his career.

The 29-year-old Frenchman won three qualifying matches to make the 32-player main draw before knocking off a trio of seeded players en route to the championship.

Meanwhile, showing no signs of fatigue despite playing his fourth tournament in a row Isner entered the Winston-Salem Open seeded fourth and survived Friday’s taut, seesaw 7-6 (7), 6-4 upset of top-seeded Andy Roddick for a spot in Saturday’s center court championship title tilt. It was Isner’s second win in five matches against the 2003 U.S. Open champion.

In addition, Saturday’s championship represented the third ATP World Tour title overall in eight finals appearances for the 28th-ranked Isner, who will face Marcos Baghdatis of Cyprus in the opening round of the U.S. Open next week. 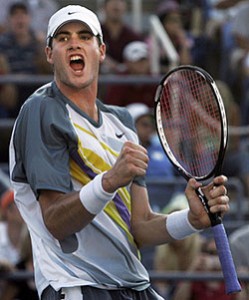