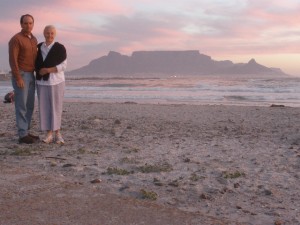 Atlanta-based tour operator Richard Pace was never a soccer enthusiast — until the World Cup was awarded to his home away from home. Now, he’s promoting the event as a springboard for American fans wishing to experience the wonders of a faraway paradise.

As a young man growing up in Greenville, N.C., Richard Pace didn’t care much for the sport of soccer. Like the majority of youngsters around Eastern North Carolina, baseball was Pace’s passion.

Today, Pace runs an Atlanta-based travel company called Southern Sky Adventures, which specializes in organizing for its clients guided and self-drive trips through southern and East Africa, with his strongest offering being South Africa. From June 11 through July 11, South Africa will serve as host country for soccer’s biggest event, the World Cup — and Pace has suddenly found his interest in the sport growing by leaps and bounds.

“Even though soccer wasn’t my game when I was kid, I was fortunate to be able to travel internationally at a young age and from that experience I gained an appreciation for the sport and its passionate fans,” says Pace. “As a tour operator with a focus on excursions to South Africa, the World Cup has brought all these worlds together. I couldn’t be more excited about the opportunity to use my experience to assist soccer fans who want to visit South Africa and experience not only the greatest soccer event in the world, but also expose them to what I consider the most amazing country in the world.”

Both nature and nurture played significant roles in Pace’s attraction to South Africa. His mother, Bartje, is Dutch, and took him and his siblings to Holland each summer to visit her family during their youth— trips that helped cultivate in young Richard a strong bond to his European roots. His grandfather worked many years for the Dutch East India Company, the largest foreign trade company in the world for 200 years, and the organization that founded the original city of Cape Town as its first African outpost in 1652. The current cultural influence of the country’s Dutch founders proved to serve as a strong a foundation for Pace’s attraction to modern-day South Africa.

In addition, Pace’s father — a voracious reader with keen interests in history, biography and geography, and deep respect for those who came before us — educated himself on past and present South Africa through books, and his informal education motivated Dr. Pace to pay a personal visit to the country — and to later return a few times with his son.

Richard would go on to graduate from the University of North Carolina-Chapel Hill in 1989, and he spent a decade in corporate America, first with First Union Bank and later Coca-Cola. He planned to take a six-month trip overseas before considering his next employment options and decided to fly first to South Africa. Blown away by the area, he spent all his time traveling through South Africa and some of her neighboring countries. Returning home in 2000, his passion for South Africa never waned, and eventually motivated Pace to form Southern Sky Adventures. “Guiding trips to South Africa allows me regular entrance into a part of the world I do not want to leave,” he says.

Pace started his business using South Africa as its primary destination, and while he has since expanded into other parts of southern Africa and East Africa, South Africa remains his favorite destinations for clients.

“Of all the vacation places in the world, the one which is most complimented to me by those who have traveled is The Republic of South Africa,” Pace says. “It boasts everything the rest of Africa has — bountiful wildlife, magnificent vistas and exotic locales — but it has much more. The country offers a very high standard of living, similar to that of Europe or America. After a week or so in the bush taking in the Big 5 in a national park the size of Massachusetts in Kruger National Park, settling into a few rounds of golf at a Palmer, Player, Nicklaus or Els designed course and a few days in the Winelands offers a welcome change.

“South Africa has one of the most beautiful and extensive seacoasts in the world, with restaurants, hotels and amenities superior to America’s standard. The people, who all speak English, are friendly and helpful. Cape Town is regularly ranked as one of the most beautiful cities in the world, often described as San Francisco on the Italian coast. The Winelands rival Napa Valley and are home to many wineries over 300 years old with Cape Dutch architecture and bed and breakfasts abounding. It has the scenery, the sea, dramatic nature, mountain ranges, modern infrastructure, and incredible hospitality.”

Good reason, Pace says, why South Africa is known as, “A World in One Country.” And now, as the eyes of the world turn to his home away from home, Pace hopes the World Cup will provide the proper window of display of everything the country has to offer.

12 Responses to “Getting His Kicks in South Africa”