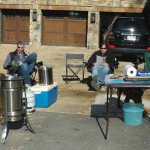 John Cuckler Jr., left, and Peter Odiorne sit and monitor the turkeys as they deep fry — a Thanksgiving tradition at the Mountain Air CC.

BURNSVILLE, N.C. (November 2013) — In his job as a creative director, Peter Odiorne spends considerable time on the road. Back home in Philadelphia, meanwhile, Odiorne and his wife of 16 years, Liz, are raising four daughters ranging in age from 3 to 11, so the 41-year-old also spends time trying to juggle quality family get-togethers.

For Odiorne these days, optimal family time takes place during the holidays and actually requires very little planning: His favorite holiday is Thanksgiving; his next favorite, Odiorne says, inspired by Thanksgiving in a roundabout way, is Fourth of July.

Both occur at Mountain Air Country Club, a graceful, private aerie perched nearly a mile above sea level in North Carolina’s Blue Ridge Mountains just 30 minutes northeast of Asheville, N.C. As the holiday season begins its final approach atop this pristine mountaintop, the community springs to life for its annual crescendo: a Thanksgiving weeklong celebration that has steadily become among the most popular events on the mountain — attracting more than 300 members — and has inspired a host of unique Mountain Air traditions.

Odiorne says his family’s Thanksgiving experiences at Mountain Air not only spurred them to begin spending a large portion of their summers at the community — developed two decades ago nearly a mile high atop Slickrock Mountain at some of the highest elevations in the Tar Heel State’s picturesque Blue Ridge Mountains — they have already provided his four daughters a wide swath of unique memories as well.

“We build fires, make s’mores, hit the driving range, play football, take golf cart rides, we keep an eye out for bears, you name it,” said Odiorne. “Our girls love to hike up to the tree house on top of the mountain. As they get older the experience is different every time, which is really neat.

“Thanksgiving at Mountain Air is like camp for three generations: grandparents, parents and children,” said Odiorne. “It is a very special place — particularly for our girls to be able to spend such quality time with their grandparents.”

With him from his home in Birmingham, Ala., Odiorne’s father-in-law, former Mountain Air Board President John Cuckler, brought to the community a tradition of deep-frying the family turkey. After that, the family decided that if they were going to deep-fry one turkey they might as well deep-fry five or six — which has now turned into a dozen or more at the request of their Mountain Air friends and neighbors. “I think I’ve had maybe one non-deep-fried turkey since I had my first,” said Odiorne. “I’ll never eat another turkey that is not deep-fried.”

Last year, the Cuckler family deep-fried 17 turkeys: “People begin arriving around 7:30 AM and it has turned into a giant, all-day party,” said Cuckler’s wife, Margie. “That’s the best thing about Thanksgiving at Mountain Air. It is a laid back, fun week with very few expectations, just a special time with family and friends.”

Mike Renfro has heard so many rave reviews he said he plans to ask the Cuckler’s to fry a turkey for his family this year as well. “I’m going to ask them to plunge one down for us,” said Renfro. “I hear they’re delicious.”

Renfro and his best friend, Ernie Euler, are business partners who for nearly a quarter of a century have run a commercial real estate development business in Melbourne, Fla. “[Mike] is not only my business partner, he is my best friend and I would certainly say my spiritual compass as well,” said Euler.

The two are also devoted, longtime Mountain Air members who have started their own family Thanksgiving traditions. Mike and his wife, Mary, have four kids and five grandkids (“and growing” adds Mike). Meanwhile, numerous extended family members join Ernie, his wife, Tina and their high-school son, John Lucas, on the mountain at Thanksgiving. For both, the get-togethers at Mountain Air have outgrown their own residences, so the families also rent some of the community’s luxurious condominiums.

“From our family standpoint, Thanksgiving has become the most important holiday on the Renfro calendar,” said Mike. “It is a very active week. Although we don’t have our meal on the top of the mountain, we pretty much participate in everything else the club puts together: building gingerbread houses, the lighting of the tree, the caroling with hot chocolate and meeting Santa Claus. Our grandchildren just absolutely love everything the association puts together.”

Best of all, according to Renfro, the Mountain Air golf maintenance staff mows a fallow field every year so his family can enjoy its annual family Thanksgiving football game prior to their meal. “The highlight of the week is the annual family football game on the field behind our condo,” said Renfro. “We really look forward to that special time.”

As for the Euler family, they started making the tradition of going to Mountain Air for Thanksgiving and have only missed once in the past nine years, now welcoming numerous family members from Florida, South Carolina and New York.

(Editor’s note: This story originally appeared in the Asheville Citizen-Times.)