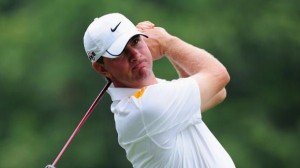 Few things in this generation’s history compare with the significance of September 11, 2001. “We lost my brother John Patrick Salamone who was working on the 104th floor of the North WTC tower on 9/11” says Mike Salamone of Charlotte, North Carolina. “Since then, my fear has been that the American people would, over time, forget the enormity of this tragedy.”

Most of us can describe exactly where we were, what we were doing, and how we felt when we were confronted with the unfolding tragedy. Strangers helped strangers. Flags were raised and candles were lit with a spontaneous spirit of unity as one by one, Americans linked arms. September 12, 2001 was truly a day when we stood together as one.

“Apart from the day after the attack on Pearl Harbor, 9/12 stands alone as a day when people came together,” says retired Gen. William ‘Buck’ Kernan, who served under President George W. Bush at the time of the attacks and now serves as vice chairman of the GOLF 9/12 board.

The three GOLF 9/12 co-founders — Col. Ray Horoho (Ret.), Rich Davies and Johan Immelman — saw something special on 9/12 that is worth celebrating and remembering. Col. Horoho (Ret.) worked in the Pentagon with his wife Maj. General Patty Horoho on the day of the attack. “There were no divisions on 9/12. To a person, we stood passionately united,” says Horoho. Davies adds, “We were indeed ‘one nation, under God.’”

For his part Immelman, like his associates and so many who love this country, is concerned that the world has already begun to forget that feeling of national unity. As a past Commissioner of the Southern Africa PGA Tour, member of the Board of Directors of the Canadian Tour and father of 2008 Masters Champion Trevor Immelman, he believes the inherent values of the game of golf represent an ideal vehicle to regain that spirit of unity.

“The game of golf represents the best of humanity – integrity, honesty, respect, courtesy, charity, sportsmanship, and the pursuit of excellence,” says Immelman, CEO of GOLF 9/12. “These are values we hope GOLF 9/12 can count on for support.”

On the Monday following the 10-year anniversary of the attacks, GOLF 9/12 patrons will tee off simultaneously at their home clubs and courses in what can become the largest multi-venue golf event in the world.

Embracing the power of technology, players will be connected via live mobile scoring and a real-time leaderboard. Players will be able to check the mobile leaderboard as they play, and heckle and challenge friends wherever they are playing in a matter of seconds, using a custom GOLF 9/12 mobile phone application.

GOLF 9/12 is a forward-looking initiative. Proceeds from funds raised from optional after-play gatherings will be used to build relationships by supporting people and charitable organizations, upholding the spirit of freedom, especially in places where hopelessness breeds.

GOLF 9/12 is a non-profit organization with 501(c)(3) status that will support The Pentagon Memorial Fund, The 9-11 Memorial, Flight 93 Memorial, local First Responders, Armed Forces Charities and Friends of Freedom Charities, including global outreach projects and educational programs throughout the world.

Davies, Chairman of the GOLF 9/12, adds, “GOLF 9/12 is a grassroots initiative; it’s you and me doing something to remind all who treasure freedom that we are one.”

Bridgestone Golf and the newest member of its TOUR team Davis Love III have teamed up for a season-long effort to benefit GOLF 9/12. Bridgestone Golf will contribute $100 to GOLF 9/12 for every birdie that Love cards from the start of the 2011 PGA Tour season through September 11th – a sum, based on Love’s storied career that should climb above $30,000.

In addition, many of the golfers will be wearing special GOLF 9/12 lapel pins the remainder of the TOUR season. Immelman quotes Nelson Mandela who once said, “Sport has the power to change the world. It has the power to inspire. It has the power to unite people in a way that little else does.” “This is the hope behind GOLF 9/12, to help us remember the unity we felt the day after the 9/11 tragedy,” says Immelman. “GOLF 9/12 provides a way for us to unite again, and personally engage in honoring, upholding, and celebrating the freedom we are blessed to enjoy.”

“Thanks to groups like GOLF 9/12, we can ensure that the memory of Johnny, and all those lost on that day in NYC, Washington, DC and Shanksville, PA will live on. This is extremely important so that our country will never allow itself to be as unprepared for another enemy attack again” says Salamone.