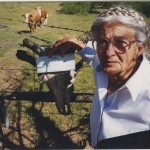 BASTROP, TEXAS — While Marjorie “Tiny” Leach may not be a household name in the world of golf, she is a living legend in golf circles around her native Austin and throughout the Lone Star State.

Tiny’s “celebrity” is due in part to her nearly half-century of tireless work on behalf of the Texas Women’s Amateur Golf Association (TWAGA). Each year, the TWAGA Championship Trophy is given in honor of Tiny as a tribute to all she has given to the organization.

But there is far more to the story of the 81-year-old whose oversized spirit and ebullient personality belie her nickname. Indeed, Tiny Leach is a tough, independent, quick-witted woman who has lived a life that would make Forrest Gump proud; a Texas treasure who has excelled at various points along the way as a rancher, businesswoman and champion golfer.

Linksters tackling Wolfdancer Golf Club outside Austin learn about Tiny Leach firsthand when they pass through the Wolfdancer starter’s hut, which stands in her honor and includes a collage of photographs and articles documenting her numerous newsworthy experiences in and away from the game of golf.

The 150 acres of Wolfdancer Golf Club is part of the 405-acre Hyatt Regency Lost Pines Resort and Spa, which sits within a larger, 1,000-plus acre natural park. The Wolfdancer golf course was designed by Arthur Hills/Steve Forrest & Associates and has been lauded since it opened in 2006.

Before the Hyatt developers arrived the land’s previous owner had been Ms. Leach, who for many years had owned and operated a successful cattle ranch on the site nestled along the banks of the Colorado River, while at the same time running her Austin leather store, “Tiny’s Western Shop.”

The Bastrop County native says she was “born poor in money, but rich in family values” in 1930 to a second generation of central Texans. Tiny spent her childhood milking cows on her family’s dairy in Austin.

In 1951, Tiny began working at a boot and saddle shop under the tutelage of its owner, legendary cowboy, rodeo man, bootlegger and leather man T.C. “Buck” Steiner, learning to do custom hand tooling of leather goods while helping outfit everyone from famous gangsters to Texas governors.

Eight years later, Tiny took a small stake and struck out on her own.

She was in her 20s when Tiny decided to try her hand at golf, encouraged by her older brothers who had played the game and caddied most of their lives, and influenced by her Austin family friend Harvey Penick. She did not spend much time playing, however, electing instead to spend most of her time on the driving range and the putting green.

“I’d practice ‘til my hands like to wore out,” Ms. Leach says with her trademark Texas drawl. “People would ask me, ‘You ever gonna play or just practice?’ Well, I didn’t want to go out on the course and embarrass myself or anyone who knows me!”

It wasn’t long before all her practice began to pay off for Ms. Leach. She won the Austin women’s city championship three times in a row and in 1966 won the TWAGA state championship tournament before she “got busy making a living.”

While the business world was equally kind to Ms. Leach, she had a lifelong friend who over time had squandered the majority of her family inheritance. “She was born to money,” Ms. Leach says, “but as I like to say, ‘The show was over, the tent fell and the monkey died.” When her old friend eventually needed to sell her farmland she turned to Tiny, who bought the land in 1975.

In the early 2000s, Ms. Leach was approached by the Lower Colorado River Authority (LCRA) about selling her land — eventually telling her she could, in essence, name her price.

It was at that time Tiny discovered another of life’s important lessons.

“I learned a great motivator in life is being handed a lot of money you never thought you’d get,” Ms. Leach recalls with a laugh. “I walked into the bathroom of my store, looked at myself in the mirror and said, ‘Old lady, today we’re gonna sell us some land.’ I’d have been arrested for being insane if I didn’t sell.”

Through her myriad experiences, Ms. Leach has made the acquaintance of Texas golf legends like Babe Zaharias and Patty Berg, and she has enjoyed longtime friendships with legendary Austin natives Ben Crenshaw and Tom Kite. In addition, Ms. Leach is responsible for founding the Texas Women’s Open Amateur tournament, a classic, match-play event open to all non-professional women golfers in the state.

After retiring from competitive golf, Ms. Leach became move involved with TWAGA and began serving on its board, eventually serving in every TWAGA board position at least once and serving as President several times.

In 1977 she became the TWAGA State Tournament Director, a position she has held ever since. Because of her endearing banter and her relationship with so many people in the golfing community she continues to bring the tournament to wonderful venues.

With a keen eye for details, Ms. Leach has worked hard to see that the tournaments are well placed and impeccably coordinated year after year. And she makes certain that the tournament maintains the integrity and sportsmanship that it was designed to do from the beginning.

When the 2010 state tournament host course lost its greens and was forced to back out at the last minute, Ms. Leach had the opportunity to bring her signature event to her one-time ranch, which now served as home to Wolfdancer Golf Club. Tiny approached Wolfdancer Director of Golf Eric Claxton and told him: “Wolfdancer is near and dear to my heart. Next year is my 80th birthday and I want to celebrate by having my tournament on your golf course.”

Appropriately, perhaps, the tournament at Wolfdancer proved one of the most popular in recent memory. At dinner the evening prior to the championship round, many of the Hyatt Lost Pines staff and 130 tournament contestants gathered around to serenade Ms. Leach with a heartfelt rendition of “Happy Birthday.”

One Response to “TRUE GRIT”