Family celebrates Father’s Day by wrapping up memorable, cross-country golf crusade. Bud Sheets teed it up while Cari Sheets … like her mother … drove the cart. 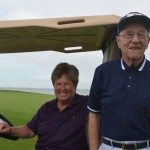 Cari and Bud Sheets have pulled off an impressive, if unusual, golfing feat.

OUTER BANKS, NC (June 2012) — It seems fittingly appropriate for Arthur “Bud” Sheets and his daughters, Cari Sheets and Nancy Darr, to wrap up a very special, father-daughter quest around Father’s Day on June 17. Yet, their achievement represents as much a loving tribute to their late mother, Betty, as it does their father.

A little background: Bud’s lifelong love affair with golf first started when he was 12 years old and working as a caddie at the private club near his family’s home. When Betty entered his life, she was courted by her future husband on the links of Saukie Golf Course in Illinois.

By the time Bud retired from his position as a bank executive in Rock Island, Ill., in 1989, his meticulous, hand-written documentation of every round of golf he had played through the years revealed that he had at that point teed it up in 22 states.

So he and Betty talked about it and decided that instead of purchasing a retirement home getaway in San Diego or something equally decadent, they would continue their travels and complete Bud’s goal of playing golf in all 50 states.

His mission became her mission. Sidelined years earlier by back surgery, Betty came along for the ride. She drove the cart and Bud drove the ball.

“But she sure drove the cart a lot better than I drove the ball,” Bud says with easy, Midwestern timing.

The next two decades took Betty and Bud literally cross country, with visits to see children and grandchildren highlighting their mission. A road trip to a grandson’s wedding in New York allowed them to knock out six states in one fell swoop.

Bud even managed three hole-in-ones along the way including one at the venerable High Hampton Golf Club in Cashiers, N.C., where he also managed to avoid purchasing a single drink to mark the feat after discovering that Cashiers is a dry town.

Betty and Bud’s final 18 holes of their quest occurred in 1997 in Anchorage, Alaska; their children and some friends on hand to celebrate with champagne and a glass-encased, colored map of the United States. Inside the glass, pins marked each state in which they had played and below the map it read: “Bud drove the ball. Betty drove the cart.”

It was on their historic visit to Alaska when Cari and Nancy joined the fun. During the celebration, Cari drove a golf cart for the first time and thought to herself: “Hey, this is fun!”

A competitive tennis player growing up, Cari thought of golf as a silly sport for people who couldn’t play tennis. Yet, here were her mother and father celebrating their momentous golf achievement together. She began to reassess her outlook.

Cari drove a golf cart again at Lake Tahoe, Nev., while serving as a volunteer at the American Celebrity Golf Tournament. After her third time, when she took a helicopter ride to Catalina Island off the coast of California — where the standard mode of transportation is the golf cart — it dawned on Cari that she had started a trend.

“I retired in 2002,” says Cari. “Although I had started playing golf by then, and thought it was pretty fun, I really loved driving the cart. At that point, I made it my retirement goal to drive golf carts in all 50 states.”

In her quest to do so, Cari has also played golf in all but 13 of the states. Meanwhile, Cari’s sister, Nancy, has been along to help document the family feats every step of the way.

Nancy said she gave some thought to taking up golf once or twice, but made a final decision following a round of golf on her family’s favorite golf course. “We were playing the eighth hole at our home course, Nags Head Golf Links,” Nancy says. “Cari asked Dad how to play the hole, and Dad’s response was, ‘Well, it’s a tough one because you really can’t see where the cup is, since it is a dogleg hole.’ That did it. I announced I could never play this game because I was not going to hit a ball somewhere when I could not even imagine its destination.

“They never again invited me to accompany them on the links,” Nancy adds. “They both have a great outlook on life and a wonderful sense of humor. Luckily, Cari inherited the patience and sense of humor genes from our dad.”

Like their mother and father, Cari, too, has had her share of adventures along the way. In 2010 she was visiting Laurel, Del., scratching off the 40th state on her list. But because Laurel does not have a golf course, the Chamber of Commerce arranged for her to drive a cart on public streets, with a parade permit and escorted by a member of the Laurel police force, complete with his lights flashing.

Cari drove a golf cart while playing in the snow and rain during a Nor’easter on Cape Cod. She also drove golf carts on university and high school campuses. She drove carts in islands on both the Atlantic and Pacific Oceans.

When Cari recently celebrated her 49th state in Bennington, Vt., friends came from three other states to help her celebrate. Cari also played at a retirees’ course in Ohio, where they required a $1 key deposit for the cart. When Cari inquired about the deposit, they responded, “You’re old! You might forget to return it.”

Cari’s final state promises to be a little warmer than Bud and Betty’s. She is traveling to Kauai, Hawaii, the second week of July, knocking off her 50th almost 15 years to the day her father played and her mother drove their final state.

As for Bud, he lost the other love of his life, Betty, on July 4th six years ago. Now a smooth 7-iron away from 88 years old himself, the former 11-handicap still plays and shot his age for the first time after he turned 80.

Bud jokes that he wants his ashes spread in the 8th hole sand traps on the Nags Head Golf Links “because I spend so much time there anyhow.”

“Of course, we hope that day does not come for a long time,” says Nancy.

In the meantime, Bud is always up for another challenge. “Someone said the other day, ‘What if they make Puerto Rico the 51st state,” he said. “I said, ‘Gotcha! Played it in 1951.’”

Cari is quite excited about getting her 50th state next month in Hawaii, but says the best part of the quest was the journey, with more than 50 friends around the country helping her achieve the goal. And most importantly, “that dad and I can celebrate our journeys together,” Cari says. “I followed in his cart path.”