The Club at Viniterra has earned rave reviews among golfers since opening to the public earlier in the year. This Rees Jones masterpiece shares top billing at Viniterra with a world-class vineyard that has the wine industry abuzz. 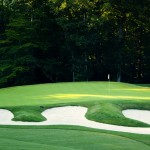 Viniterra is a new Rees Jones gem near Richmond, Va.

RICHMOND, VA. — The word “Viniterra” means loosely, “earth wines” or “land of grapes.” In the case of one gated, Richmond-area golf community — where there are not only luxury estate home sites and planned golf cottages, but also a world-class winery — either definition fits the bill.

Nestled just off Interstate 64 in the New Kent Vineyards Development of New Kent County, nearly equidistant between Richmond and Williamsburg, Viniterra is an environmentally sustainable community offering easy access to the Mid-Atlantic’s urban areas, the Mid-North Carolina Outer Banks, the James, York and Rappahannock Rivers — along with the Chesapeake Bay and seemingly endless, beautiful Virginia countryside.

The ongoing New Kent Vineyards Planned Unit Development has been designed to include five major land bays connected by a European style parkway utilizing roundabouts and wide natural buffers to retain the rural character of the area. Viniterra epitomizes upscale living at its finest, with estate-sized home sites surrounded by acres of unspoiled beauty.

There are a pair of glittering centerpieces to the Viniterra enclave: A stunning, Rees Jones-designed golf course called The Club at Viniterra, which has won the hearts of the area’s golfers since it opened its gates to select outside play a few months ago; and the equally remarkable New Kent Winery, built almost entirely using recycled building materials, which has won the hearts of the Virginia Wine Community.

The Club at Viniterra consists of slightly less than 1,200 acres of wooded and rugged terrain. Upon this parcel, Jones — the famed “U.S. Open Doctor,” son of legendary architect Robert Trent Jones and recipient of the Old Tom Morris Award from the Golf Course Superintendents Association of America for his lifetime commitment to the game of golf — crafted a rolling, challenging jewel that can stretch to nearly 7,800 yards from the tips and flies against the grain of your typical Tidewater design.

With massive fairways and run-ups to nearly all of its jaw-dropping green complexes — combined with the thoughtful and strategic placement of various grass, sand and water hazards — Viniterra is enjoyable for golfers who select the proper set of tees (some holes offer up to a dozen different teeing grounds).

The masterful Jones course routing incorporates many of the diverse, natural features of the site including frequent and dramatic elevation changes, various wetland areas and portions of mature, deciduous forest. Where appropriate, ponds and 13 bridges were built to provide both strategic and aesthetic value.

“You will never be bored at Viniterra no matter how many times you play,” said Bob Foster, Director of Golf. “The scenery is spectacular as there are amazing topography changes not normally found in this part of Virginia. Any golfer of any skill level can play and enjoy the course with yardages ranging from 5,200 to almost 7,800. From the back tees, it is a real brute and rated as one of the hardest in the Commonwealth.”

Echoing the development’s environmentally conservational practices, The Club at Viniterra saves as much as 80 percent of the water consumed by traditional courses and exclusively uses the grass hybrid “Celebration,” which is far more drought-resistant and requires 70 percent less water to maintain than traditional course sods.

The Jones design at Viniterra opened in late 2009 as an amenity to help sell real estate. Now that the golf course has fully matured, the developers elected to open for limited public play.

In addition, there are three different areas along the golf course from which the incredible New Kent Winery can be seen and enjoyed. Built by craftsmen with historic materials reclaimed from buildings and structures well over a century old — beautiful heart-pine trusses were reclaimed from a 1901 Southern Railroad Depot located in the Shockoe Bottom area of Richmond; while heart pine structural timbers and floor timbers were recovered from a Connecticut warehouse circa 1852 — the 17,000-square-foot winery is equipped with state-of-the-art wine-making equipment from around the world, and has already produced some of the finest wines in Virginia including Chardonnay, Reserve Chardonnay, Merlot, White Merlot, Meritage, Vidal Blanc and Norton — a grape native to Virginia.

Among the oldest counties in Virginia, New Kent was settled by the English and so named for Kent in England. The area was the setting for significant events in American history: Captain John Smith first visited New Kent in 1607, and the church where George and Martha Washington were wed still holds services there today. Names like Pocahontas, General Cornwallis and Thomas Jefferson also once called the region home, and many different armies have marched along New Kent’s roads — among the oldest in America — including British, American Revolutionary, Confederate and Union forces.

Today, New Kent is home to Colonial Downs, Virginia’s home of thoroughbred horse racing, as well as some of the most inviting wine country, offering natural beauty, ample privacy, and endless luxury amenities. The county is known for its rivers and streams ideal for sailing, fishing, and other outdoor activities for sportsmen.

(Editor’s Note: A version of this story originally appeared in the Spring 2012 version of Virginia Golf Report.)