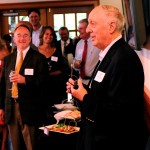 NEW KENT, VA. (May 24, 2012) – An early-morning sun had barely cleared the horizon Tuesday as Rees Jones stood at the first tee of one of his newest, original designs and declared himself pleased with the finished product.

After spending two days this week with developers, members, guests and media at The Club at Viniterra www.Viniterra.com Jones was able to witness first hand what he had been hearing since the course debuted a few years ago and recently welcomed public play: Viniterra is a high-quality course constructed for today’s modern golfer.

Viniterra opened to rave reviews around the state, including positive feedback from one of the greatest amateur players in history, Richmond golfing icon Vinny Giles, who first met Jones at the 1968 Masters. Since then, of course, Jones has gone on to earn the moniker “The Open Doctor” for his redesign of courses in preparation for major championships.

Following a few hours riding around The Club at Viniterra on Monday afternoon, Jones spoke during a cocktail party in Viniterra’s stunning winery and proclaimed his newest Commonwealth State design to be an example of the “course of the future” – a neoclassical design that fits the land, with high ground and little water with which to contend. Jones incorporated windswept bunkers of yesteryear to help define the holes and provide strategic value.

“We’ve gone back to the future with an old style architectural design with the modern player in mind,” Jones said.  “In the old days, they didn’t have much water because the courses were always on high ground and we’re on high ground here. There’s not that much water to contend with so it’s very much like old style courses.

“This is a thinking person’s golf course. It’s all about shot options with multiple tees and multiple green entrances.”

Jones said he designed Viniterra primarily for the average player. While Viniterra does stretch to more than 7,700 yards and sits ready to host any top-tier professional or amateur tournament right now, thanks in part to a recent partnership between Viniterra’s development team Boddie-Noell Enterprises and new course manager Wingfield Properties, it is most commonly played around 6,100 yards.

Boddie-Noell’s Kitty Hawk Land Company – which also collaborated with Jones on the Currituck Club at the Outer Banks of North Carolina – provided him the best land of the New Kent Vineyards Project’s expansive rugged terrain to build the golf course, and Jones responded by finding an appropriate balance between the 18 holes that best fit the property and still offering premium home sites for the residents.

“We’ve designed this golf course for everybody” Jones said. “We’ve got length for the bombers and shorter tees for those like myself who don’t hit it very far anymore. What you see is what you get in terms of being able to see most every shot on the golf course. There are generous fairways and open approaches to many of the greens. If you happen to go over some greens, there are catch basins and grass hollows to capture those shots.”

Jones was born into the game of golf. He learned to play as a youngster, competing as a junior golfer in college and while in the army. He grew up traveling with his family to golf courses all over the world and worked in the summers for his father, renowned golf course architect Robert Trent Jones.

After college at Yale and graduate studies at Harvard, he went to work in 1964 as a principal in Robert Trent Jones, Inc., and in 1974 founded his own design firm, Rees Jones, Inc., headquartered in his hometown of Montclair, New Jersey.

He has been there ever since.

Jones has designed or redesigned more than 100 golf courses in his career. His awards include the 1998 Metropolitan Golf Association Distinguished Service Award, the 2002 Metropolitan Golf Writers Distinguished Service Award, Golf World Magazine’s 1995 Golf Architect of the Year, The Golf Course Superintendents Association of America’s Old Tom Morris Award in 2004, and the 2000 Robert Morris Award of the Welsh Society of Philadelphia. In addition, since its inception, Rees has been included on Golf Digest Magazine’s list of the top five architects (Currently No. 2).