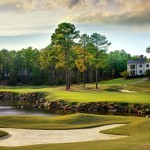 SOUTHERN PINES, N.C. — Back in his heyday Randy Bolton was a star collegiate running back — a four-year, Winston-Salem State University letterman who helped the Rams go 11-1 in 1977 and again in 1978 en route to the Division II national semifinals.

Now known as Dr. Randy Bolton, the retired school principal still carries a competitive torch. Which is why 15 years ago, he and Charlotte neighbor Rick Martin decided to contest a golf outing around the Pinehurst area, based out of the Talamore Golf Resort.

In the first year, the “BoMar Open” as they called it attracted eight players. By 2007, their three-day shindig had grown to 80 participants, many of whom return year after year and have started adding an extra day onto the trip, coming from all over the map — many as far away as New Hampshire and Chicago.

They have enjoyed many of the Sandhills area’s most well-known golf designs, including the Rees Jones gem at Talamore, which Golf Digest named Best New Course in the South, and its Arnold Palmer-designed sister layout, Mid South Club.

One night they will go out for dinner in the nearby Pinehurst Village, the next evening they will stay on site at either the Talamore Golf Villas or the well-appointed and luxurious Lodges at Mid South and cook their own meal following a fun and boisterous banquet at the Talamore clubhouse. Some play golf the entire time, others take time to relax and fish in the reservoir or play cards in the cabana.  “I could live right here in these condos,” said Bolton. “We love Talamore. It’s our home while we are here and they are fantastic. They make us feel so welcome.”

Retired from GM, Jack Ives has been pulling together golf buddy trips for the past three decades, but once he and his group discovered Talamore, it has been their permanent home away from home. Now living in Fitchburg, MA, about 30 miles northwest of Boston, Ives has resided in several different states during his professional career, and his golfing buddies come from as far away as the West Coast and Canada.

The Ives group comes to the Sandhills for a full week of golf and has grown from four players to a consistent count of 20-plus. “Friends invited friends,” said Ives, “and once they came, they kept coming.” Ives said his group prepares breakfast at the villas, lunch on the golf course and dinner somewhere in the vicinity of the Village of Pinehurst. Near the end of the week, they have an awards banquet where everyone walks away with something.

“The banquet tends to get lively. We were the floor show at Bonefish Grill one year,” Ives said. “We give prizes for low score, high score, you name it. We definitely have a lot of laughs. Mostly, though, we play golf and tell some lies.”

Another Talamore Golf Resort regular, John Williams from Richmond, Va., visits with his group of 16 friends in the middle of the summer, when the courses are not crowded and the price is right. “We get a two-bedroom condo that is really nice, and it costs less than a motel room,” said Williams. “It is so convenient, of course, because you can be in the (Pinehurst) village so quickly. We love to go to the restaurants in town.”

They are among many golf aficionados who regularly visit Talamore Golf Resort, which dates back to 1991 and first made headlines for its famed stable of llama caddies, along with unparalleled customer service. Today, Talamore Golf Resort has grown to become one of the Pinehurst area’s premier golf getaways, which is why more than 90 percent of Talamore’s customers return or refer new business.

Talamore’s clubhouse, pool and cabana are all conveniently located next to the Talamore Golf Villas, which offer top-shelf amenities and panoramic views, and were constructed soon after the club’s opening. The Talamore golf and travel experts offer a wide variety of value-added packages and customized trips that not only include Talamore’s 36 championship holes, but also more than 20 other premier golf courses around the famed Sandhills.