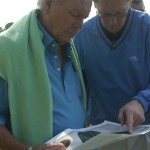 PENSACOLA, FLORIDA — With an eye toward transforming the area’s only municipal golf course into a more profitable operation, the City of Pensacola and the Parks and Recreation Department invested $750,000 on what many would call a long overdue, “extreme makeover” to Osceola Municipal Golf Course.

Its new marketing slogan is: “Come Play Osceola Again For The First Time.”

Minchew and Lepanto constructed four new holes at Osceola, including a trio of new par-3s. The course remains approximately the same length — slightly more than 6,400 yards from the back tee boxes — but the former par-72 will reopen as a par-70. In addition, the new tee areas are squared and significantly larger, with separate tees for seniors and ladies, along with junior tee markers.

A grand re-opening event took place in October during the annual Mayor’s Cup Tournament, before which former U.S. Open champ Jerry Pate, a native of Pensacola, conducted a golf clinic at the practice facility. Other local touring professionals with ties to Osceola include Joe Durant, Heath Slocum, and Boo Weekley.

“I grew up playing Osceola,” said Durant. “I’ve probably played it a 1,000 times. It is very exciting to see the improvements. The new driving range and practice facility are great. The added length with the new tees, new bunkers, several new holes, and character designed into the greens will make the golf course enjoyable to all types of players.”

The course originally scheduled to open around the first of September but was postponed by a tropical storm — which actually proved to be a blessing as the new turf including the Mini Verde Bermuda grass greens is in very good condition.

The state-of-the-art practice area for the First Tee facility is located adjacent to the No. 1 tee, formerly No. 17, in front of the clubhouse. The former 17th hole at Osceola will be the new No. 1 hole. In addition, the Osceola clubhouse has also been refreshed with new carpeting, flat-screen TVs and a new restaurant.

It was the biggest reshaping effort since Osceola opened in 1926. Local reports say $500,000 was provided by local option sales tax money, while remainder will be paid back from course revenue in a five-year period.

“This place is near and dear to a lot of people’s hearts,” said Minchew. “The whole golf course will have a new look. The greens were nondescript now they are strategically re-contoured and much more playable the turf quality is going to be completely different. Now even the best golfers will have an enjoyable challenge from the new back tees. Everyone is very excited about it.”

Minchew said that along with expanding the First Tee program and other youth-teaching programs, the practice area will enable golfers to visit Osceola simply to hit a bucket of balls, practice some putting, have a sandwich and go home. This is the second First Tee facility Minchew has designed, the first one back in his hometown of Augusta, Georgia.

“It’s really neat to see all the kids out there practicing, even when the golf course was closed,” said Minchew.

The other signature element of the Osceola project is its green complexes. The grass on the greens is now MiniVerde Bermuda, the same putting surface on the revered putting surfaces at places like the Bay Hill Golf Club in Orlando and the Tournament Players Club Stadium Course at Sawgrass.

“The greens now will have as good of turf grass as you will find anywhere and they will be able to maintain the greens at a much higher level now,” says Minchew.

In addition, the asphalt cart paths that were originally constructed in 1978 have been replaced with white, concrete cart paths that have curbs and are routed with turnaround positions on certain holes. “It adds a cleaner look,” said Minchew.

Adrian Stills grew up playing at the course, and then later returned after a pro career to become the facility’s general manager. Eddie Daigle is Osceola’s talented course superintendent.

William Earl “Wild Bill” Mehlhorn — a native Texan who won more than 47 tournaments in his 10-year playing career and competed on the first Ryder Cup team in 1927, as well as the inaugural Master’s tournament — originally designed Osceola in 1926. Widely recognized at the time for the cowboy hat he wore on the golf course, Mehlhorn was a gallery favorite due to his uncanny accuracy combined with the fact that he was the longest hitter of his day — a fantastic shot maker and great teacher.