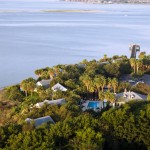 The Cottages at Charleston Harbor bestow upon their guests world-class views.

CHARLESTON, S.C. — Far more than simply a city offering something for everyone, Charleston has morphed into a cosmopolitan metropolitan by the sea, renowned as much for its history — including the introduction of golf to America — as for its Old World charm, architectural diversity, Southern hospitality, majestic beauty and mastery of the art of graceful living.

“Chuck Town’s” draws are endless. Day and night, this is a city that buzzes, as open-air markets and accompanying shops in the heart of downtown teem with vendors selling anything and everything. Food lovers can choose from a wide range of intimate cafes and award-winning restaurants that offer fine-dining experiences with a unique Southern flair.

Framing Charleston Harbor’s north shoreline like a string of pearls, The Cottages on Charleston Harbor stands as an embracing waterfront retreat offering broad views of historic downtown Charleston, Fort Sumter and Sullivan’s Island. The resort consists of ten spacious cottages – each just a few steps from the beach – plus a clubhouse that offers full concierge service, a lounge and continental breakfast, a harbor front swimming pool, a private beach and bicycles for touring the Carolina coastline and Patriots Point.

The Cottages on Charleston Harbor is an idyllic destination for cozy family gatherings, romantic escapes, golf getaways, private meetings or intimate weddings. A recent Southern Living feature on “The Best Charleston Hotels” describes The Cottages as “crisp waterfront cabins that let you soak up the rustic beauty of the Lowcountry without straying too far from the action downtown.” And indeed, a sublime view from back porches at The Cottages gazes across the harbor to Charleston, which in 2011 was named the No. 1 city in the United States by Conde Nast Traveler’s Readers’ Choice Awards, while Bon Appetit magazine named Husk, located on Queen Street in Charleston, America’s Best New Restaurant.

Charleston’s downtown peninsula is renowned for its culture, music, local cuisine and fashion. Spoleto Festival USA is held annually in late spring, is one of the world’s major performing arts festivals. Charleston is also the site of numerous significant historical sites from both the Revolutionary and Civil Wars, including Fort Sumter, where Charlestonian Confederate soldiers fired the first shots of the Civil War. Guests of The Cottages can reach Charleston by car, or via a unique water taxi service, typically accompanied by dolphins and launched from the Charleston Harbor Marina located just steps away from the resort.

The Cottages on Charleston Harbor are privately arranged and just a stone’s throw from the water’s edge offering unparalleled views of the harbor. In total, there are nine two-bedroom/three bathroom cottages with harbor front views and one one-bedroom cottage with two bathrooms with a lagoon view. Vintage heart-pine floors run throughout each cottage, which consist of a beautifully appointed living room, fully equipped kitchen, master suite, second bedroom, three full baths and a large, screened-in porch.

Charleston is among the most popular wedding destination in the country and The Cottages contributes greatly to that lofty reputation. Intimate wedding ceremonies are held on one of two harborfront locations: the private sand beach for smaller gatherings or the event lawn for larger affairs. Memorable receptions for up to 125 guests are held around the clubhouse and pool deck, complemented by the panoramic view of Charleston Harbor. Making a wedding as carefree as possible, the resort’s operations director handles all the details, from lodging to the ceremony and catering requirements.

When companies like Cisco Systems, Sea-Ray and Apple seek a unique, tranquil and comfortable site for their smaller corporate gatherings they look to The Cottages on Charleston Harbor, where the inviting clubhouse Great Room serves as an informal meeting place to exchange ideas and foster camaraderie. Attendees are treated to a charming, lodgey décor, plush couches and chairs, a gas fireplace and gorgeous views across the pool deck to the harbor beyond.

While guests of The Cottages often blissfully curl up poolside with a best-selling novel and never leave the resort, others take advantage of myriad activities, literally within seconds of their front door. The Cottages frames the tip of a waterfront tourism destination called Patriots Point, the centerpiece of which is the retired USS Yorktown aircraft carrier. The World War II vessel was commissioned in 1943 and earned 11 battle stars during its 27 years of service. Tours of the Yorktown are offered daily and include a visit to the Naval and Maritime Museum located onboard.

Golf was a tradition in Charleston as far back as the 18th century. The South Carolina Golf Club was established there in 1786 and lasted until 1800. Members back then played on a field called Harleston’s Green, outside the historic Charleston area. They didn’t play on planned golf courses, but instead on multi-purpose rugged parkland. Today, located less than a minute’s drive from The Cottages is Patriots Point Links, a stunning harbor front golf course that provides as much enjoyment from its play as its commanding harbor views. The course’s three finishing holes chase along the shoreline and offer some of the most scenic golf in South Carolina. All-inclusive golf packages are offered year-round through The Cottages.

Additionally, guests of The Cottages are just a short walk from myriad water activities offered out of the marina. They can choose from sailing charters, cruising on a 72’ yacht, deep sea fishing excursions, boat tours to Fort Sumter, sailing lessons, a water taxi to downtown Charleston and more. Many visitors find pleasure in one of Charleston’s oldest pastimes: strolling. As many tourists discover, whether it is on a guided walking tour or simply on an aimless saunter around town, a walk in Charleston is like stepping into a sepia-toned photograph: a world of horse-drawn carriages, cobblestone streets, picturesque parks, and rows of grand homes marked by eclectic architectural styles.

Visitors see up close some of Charleston’s most precious treasures: the Battery, Rainbow Row, White Point Gardens, Colonial Lake, Marion Square, the Four Corners of Law, the Custom House, and of course, the city’s many beautiful churches – one of many reasons Charleston is called, among other things, “The Holy City.”

For more information on accommodations and golf package information at The Cottages on Charleston Harbor and Patriots Point Links, call 866-901-2688 or visit online at www.thecottagesoncharlestonharbor.com and www.PatriotsPointLinks.com.