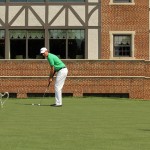 GREENSBORO, N.C. — When United States Open champion Webb Simpson rolled a few lengthy putts across Sedgefield Country Club’s ninth green Thursday morning, his targets were a pair of shining silver trophies with which he has already connected — one still freshly inscribed from his gripping, come-from-behind Father’s Day victory less than two weeks ago at San Francisco’s Olympic Club; the other from Simpson’s inaugural PGA Tour victory, now his first of three, at last August’s Wyndham Championship.

The Raleigh native, Wake Forest star and current Charlotte resident was back at Sedgefield for the first time since last year Thursday participating in the 2012 Wyndham Championship media day. And while neither the defending champ nor the press were able to enjoy their customary round of golf, due to Sedgefield’s on-going transitioning of its green complexes from bent grass to Champions Bermuda, this country’s newly crowned national champion provided the crowd in attendance a taste of what may be in store for the field during the 2012 tournament when his second putt rolled all the way off the front of the ninth green.

“With Bermuda greens, Sedgefield becomes one of the great golf courses on the PGA Tour,” said Simpson, “It’s going to be really a good thing for the tournament. As a player we love things that are challenging. [Sedgefield] was difficult before. Now it’s going to be even more difficult. I think it’s safe to say that the days of 20-under par are over. I’ve always loved Sedgefield, but I’m really looking forward to playing the Wyndham this August on the new greens.”

Champions Bermuda greens are emerging as the go-to choice for many of the country’s finest warm-weather golf clubs such as Seminole and East Lake. After Sedgefield course owner John McConnell reached the decision to transition the club’s greens in the months prior to its 2012 PGA event, he sent head course superintendent Keith Wood down to Juno Beach, Fla., to visit venerable Seminole and see what major champions like Ernie Els and Graeme McDowell have been raving about.

“Just to see what the top of the bar was,” said Wood. “This is what the best of the best looks like, so I can get that mental picture in my head and try to reproduce that as I’m moving forward. What I noticed about [the Seminole] greens was that they are receptive to very good golf shots out of the fairway. You can get the ball to sit where you wanted to and stay. But if you miss, and you have a chip shot around the green, it was really, really dicey.

“That’s the way we want it to play [at Sedgefield]. It’s the architecture around here. We want these green surrounds to stand out and have balls rolling off the green if somebody hits a bad shot, whereas before, with the bent grass in August, someone could drop-kick a 5-iron and it’s going to stop close to the pin.”

Wood echoed Simpson’s belief that the days of nearly everyone in the Wyndham field shooting a low score are over. And he made assurances that the new greens would be in top-shelf condition for the 2012 Wyndham Championship even though the greens will have re-opened only weeks earlier.

“This very first year — and this is coming mainly from conversations I’ve had with others superintendents that have switched to Champion — during the first year when you open, [the greens] are the best they’re going to be, because they are so new they’re going to be so firm and they haven’t had a chance to develop any sort of thatch or grain issues,” said Wood. “Everything is going to be just absolutely perfect. I am anticipating this year being one of our best years as far as the putting quality on the championship, without a doubt.” 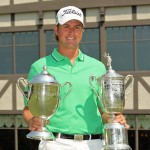 Simpson holds two of the three PGA Tour trophies earned in the past 10 months.

When Simpson stroked his first putt Thursday morning at Sedgefield the thermometer read a comfortable 75 degrees, but by the time the press conference ended had spiked to nearly 85 with forecasts later in the week calling for temperatures around the Triad in the triple digits.

“This is the first time I’ve not been afraid of a heat wave,” said Wood. “With Bermuda grass, you can get rough with it when it’s growing in the summer. With bent grass, you have to hit it with kid gloves. You better make sure it’s really soft punches and that you make sure you’re doing things exactly right or you’re going to kill it. It’s so nice to play offense. With that bent grass we’re always playing defense.”

As for the defending Wyndham and U.S. Open champion? He is ready to get back to the place that jump-started a trio of PGA Tour victories, including our country’s national championship. “I can’t wait to get back to Sedgefield,” Simpson said. “There’s no way I would have won the U.S. Open if I hadn’t won here.”