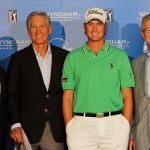 GREENSBORO, N.C. – When a late summer afternoon weather delay is the worst of your worries — particularly when the same thing has happened on the PGA Tour nine consecutive weeks — safe to say things are going well.

So it was at the Wyndham Championship on Friday at Sedgefield Country Club, where defending Wyndham champion and soon-to-be Ryder Cup rookie Webb Simpson wrapped up a pair of rounds playing alongside “Captain Love” by making consecutive birdies just before play was suspended Friday, giving the local favorite a bogey-free 63.

Following his opening-round 66, Simpson played his way into sole possession of second place at 11 under and into Saturday’s final group, where he will be joined by Jimmy Walker — who shot a career-best 62 Friday and finds himself  one shot clear of the field as he battles for his first PGA Tour victory. Meanwhile, Simpson’s other playing partner, Carl Pettersson, shot 66 Friday to finish at 10 under, where he is tied for third along with former N.C. State roommate, Tim Clark, Sergio Garcia and Harris English.

Meanwhile, enjoying Friday morning’s perfect conditions and desperate for a great round, Tim “Lumpy” Herron — who entered the day second from last (155th) in the field after an opening 76 — switched from a long putter to a short and earned not only the largest second-round turnaround on tour all season, but also the fourth 61 managed at Sedgefield in the past five years.

“I kind of zoned it in a little bit today,” said Herron following his round. “[I]t’s a great golf course and I think they did a good job with the greens.”

In the view from the Met Life blimp, there have been very few hiccups thus far in what is shaping up to be one of the most exciting and significant Wyndham Championships to date. Indeed, golf fans may one day look back at 2012 as the year the Wyndham Championship truly established its identity on the PGA Tour.

Greensboro’s Donald Ross classic and host course of the Wyndham Championship has always been an enjoyable test of golf. Now, with new Bermuda green complexes and a host of other changes around the club courtesy of McConnell Golf, Sedgefield is ready to play with the big boys.

As the final event in the PGA Tour’s regular season, the Wyndham plays a pivotal role in the race to the Playoffs for the FedExCup, offering one last opportunity for players to improve their FedExCup positions — or in some instances, move into the top 125 in the FedExCup standings and qualify for the first Playoff event, The Barclays. As a result, the names get better and the competition stays heated.

Though scores may have been better this year than many expected, the 1-under-par, 36-hole cutline is two strokes tougher than the past two years and four better than it was in 2007.

Herron entered Wyndham week No. 139 in the FedExCup standings. A missed cut would have eliminated him from the first Playoff event next week. Instead, he may have secured himself a spot in the FedExCup Playoffs. Others fighting to extend their seasons at least one more week who made it to the weekend were Trevor Immelman (No. 122), Y.E. Yang (129) and Chez Reavie (133).

Adding to Friday’s buzz at Sedgefield, Brendan Steele found himself in dire straights at No. 126 and staring up at the cutline before running off a quartet of consecutive birdies to finish at 3 under. On the other end of the spectrum, No. 121 Boo Weekley and No. 125 Jhonattan Vegas missed Friday’s cut.

It also helps for the Wyndham Championship to have such a popular defending champion. Following his first PGA Tour victory in Greensboro last year, Simpson would go on to win two weeks later in a playoff at the Deutsche Bank Championship and ultimately finished second in the FedExCup standings behind fellow Wake Forest alum Bill Haas, and in 2012 he captured his first major championship winning the U.S. Open.

Simpson became the third Wake Forest grad to win the Wyndham last year joining Lanny Wadkins (1983) and Scott Hoch (2001). Simpson is the seventh different Wyndham winner produced by an ACC school, and tries to join Sam Snead as the only players to successfully defend their title at the Wyndham Championship. Snead achieved the feat twice, winning back-to-back in 1949-50 and 1955-56. In addition to Snead, eight others have won the event more than once.

“We had a fun pairing,” said Simpson. “‘Captain Love,’ and Carl is playing some good golf.  So I knew it was going to be a fun first couple days.”