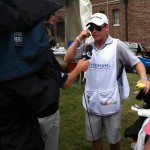 GREENSBORO, N.C. — Nestled just north of Wilmington, N.C., a serene country mile from the Figure 8 Island security bridge that transports the rich and famous to the tranquil splendor of the state’s most vogue coastal enclave, Eagle Point Golf Club is one of the finest of its type anywhere in the country.

The brainchild of North Carolina textiles magnate Billy Armfield, with a select group of founding members that includes former Morgan Stanley CEO John Mack, Eagle Point is golf only, with caddies in bleached white coveralls traversing its Tom Fazio-designed 18 holes, a world-class par-3 course and resplendent service all around — the closest thing to Augusta National ambience this side of a drive down Magnolia Lane.

When Bobby Long is not busy helping out his home club, Sedgefield Country Club in Greensboro, helping oversee the Wyndham Championship and chairing the Piedmont Triad Charitable Foundation’s Board of Directors, he also accepted the reigns from Armfield several years ago helping run things behind the scenes at Eagle Point.

And so it was that Eagle Point and Sedgefield crossed paths last week, after Sergio Garcia called Long and informed him that he was considering pulling out of the Wyndham because he parted ways with his caddie, Gary Matthews, following the PGA Championship.

Long immediately phoned Eagle Point Director of Golf Billy Anderson and the two discussed who would be the best candidate from the club’s caddie corps to loop for the popular Spaniard at Sedgefield. Long and Anderson considered many factors: One caddie was very good with the numbers but was also known for chatting incessantly, which the two thought might annoy Garcia.

At the top of their list was David Faircloth, who has caddied at Eagle Point since 2002. On Monday, Faircloth caddied for Long in the pro-am playing with David Duval; Tuesday he played golf at Grandover with his friends; and on Wednesday, Faircloth was in Long’s group, along with Webb Simpson, carrying for Dave Novak.

After Wednesday’s round, Long called Faircloth over to ask him if he would like to caddie for Sergio during the tournament.

“My response … well … there’s no way you could print what I said, but I took the job,” said Faircloth with a laugh. He met Garcia for the first time Thursday morning, watched him roll a few putts, carried his bag to the range, watched him hit a few balls — and off they went. Following an opening-round 67, Garcia fired his best round in 10 years on Friday, a 63, to catapult himself near the top of the leaderboard, where he would remain the rest of the long weekend.

Leading by one shot heading into Sunday’s final round, Garcia survived a weather postponement and cruised to a two-shot victory Monday morning. As for Faircloth? Not since Eddie Lowery grabbed the bag of Francis Ouimet and helped his unknown man topple Harry Vardon at the 1913 U.S. Open at Brookline has an unknown caddie made such a PGA Tour splash — and the Lowery-Ouimet combo was eventually turned into a popular book and a Hollywood movie.

“It feels like a Hollywood movie to me,” said Faircloth. “I came up here to caddie in the pro-am with a couple of buddies, on Tuesday we’re playing golf at Grandover having a couple of cold ones, on Wednesday I’m caddying in another pro-am and on Thursday morning I am walking down the No. 1 fairway with Sergio Garcia. Now, here I am Sunday afternoon with him winning the tournament. It’s just a crazy ride, man. The golf gods great dealt me a great one this week.”

Faircloth can be forgiven for being so excited he got his days confused. While he said he had not yet discussed his fee for the week with Sergio, caddies on the PGA Tour customarily receive around 10 percent of their player’s winnings, which in this case would translate to roughly $96,000 for Faircloth.

Either way, the final tip will likely be more than caddying during a long member-guest weekend at Eagle Point, despite the club roster that features some of the Tar Heel state’s most well heeled business leaders. “It will be better than a member-guest, I’m sure,” said the convivial Faircloth. “Whatever [the payment] is, it is been worth the experience.”

After clinching a European Ryder Cup position with the win, Garcia said his pairing with a new caddie this week was most helpful to his cause.

“It helped me,” said Garcia. “You know, sometimes I feel like caddies are great but sometimes I feel like I depend too much on them, it’s the way I am and sometimes I would — instead of making a decision myself I would wait for the caddie to make a decision for me and then maybe I don’t feel comfortable with that and still trying to do it. So, for me what I wanted, you know, was to start making decisions for myself, right and wrong. Other than 18, I was pretty much a hundred percent committed to most of my decisions and that was nice to see.”

Following the completion of play Monday morning at Sedgefield, Garcia wasn’t the only person singing Faircloth’s praises. Eagle Point member Matt Long (no relation to Bobby Long) is president of Lord Baltimore Capital Corporation in Baltimore, Md. He said Faircloth has always been “one of the top caddies at Eagle Point Golf Club.”

“[David] is continuously one of the caddies most requested by those members who play there most often,” said Long. “He is regularly on my bag, and has been a great influence on my son, Will, who is now 12 but began playing golf around age 7. Since EPGC is a caddies-only club, and a golf-only club, Will’s experiences at EP include time primarily with adults: members, guests, and caddies.

“David has personified this great influence on Will over the years. He has maximized the utility of Will’s time on the golf course by teaching him good golf etiquette, reinforced the aura associated with the combination of gentility and sportsmanship that is — uniquely, I think — associated with the game, and helped to develop in Will a steady demeanor through both good and bad shots and outcomes.”

Matt Long said he was not surprised that Faircloth had been one of the Eagle Point caddies identified as best able to perform in an exemplary fashion for Garcia without being intrusive or getting in the way. Long said the selection was a testament to Faircloth’s personality and his skills as a caddie that he was given the opportunity.

Faircloth even earned the ultimate sign of insider respect from one of the Tour’s longtime caddies, Tony Navarro, who removed the flag on the 18th green and gave it to Faircloth following Monday’s round.

“I will see if Sergio wants [the flag],” said Faircloth. “This was just the best golf experience I’ve ever had my life. I wish Sergio the best of luck … but he doesn’t need it. The guy is amazing. He made me look good.

“I just proved that if you’re in the right place at the right time, great things can happen.”