Located a few miles north of Lahaina, the former capital of Hawaii and 19th-century whaling port now populated by seaside grog shops and T-shirt emporiums, Kaanapali is a sprawling complex set between sugarcane fields and the sea. According to legend, the Royal Chiefs of Maui, each a single-digit handicapper, used these sacred lands as a personal vacation retreat back in the day.

Developed in 1960, a time when most of Maui was devoted to agriculture, Kaanapali was the state’s first master-planned vacation community. The region today attracts nearly one million visitors per year to its 11 hotels, its Whalers Village shopping complex, and its three-mile stretch of white sand beach. Kaanapali is Hawaii’s second-largest visitor destination, after Waikiki in Honolulu.

Kaanapali Golf Resort hangs its hat on Royal Kaanapali, an excellent course built over 50 years ago by Robert Trent Jones, Sr.. A second course, Kaanapali Kai, is a short, sporty layout patronized by vacationers seeking “holiday golf.” Since this was to be our final round on Maui, a serious test of golf was the only option for the spirited but somnolent Golf Road Warriors. Even from the white tees at 6,267 yards (par 71), Royal Kaanapali proved to be a very thorough examination of our skills, what was left of them. If golf is a battle of wits between player and architect, Jones beat the Warriors, 2 up.

Much is made of Trent Jones’s famed credo, “Hard par, easy bogey.” Royal Kaanapali, a former World Cup and Champions Skins Game venue, exemplifies perfectly the old master’s philosophy.  Landing areas are generous, but huge bunkers, deepened during a recent makeover, are there to gobble offline drives. More than half the greens are of the pedestal variety, and well defended by sand. There is no way to dribble an approach onto them–a first-class shot must be played to find and hold these large, undulating surfaces. There are no tricks at Royal Kaanapali. Everything is in plain view.

Rerouted since its debut in 1962, Royal Kaanapali opens tamely on flattish land in a bustling corner of the resort complex. Climbing to higher ground, the layout eventually crosses a busy highway and railroad tracks on which a restored sugarcane train runs. Holes seven through 15 crisscross sloping mountain foothills framed in places by Cook pines and Chinese banyan trees. The views of the offshore islands of Molokai and Lanai from these upcountry holes are fantastic, as is the sense of quietude. 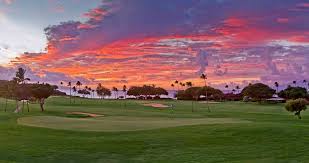 Royal Kaanapali is an open, breezy test for the best

Among the layout’s feature holes is the first, a solid par 5 at sea level that’s flanked from tee to green on the right by a canal-like water hazard. Game on. The fifth, a long par 4, is a majestic hole that swings to the left around a massive fairway bunker and parallels a walkway favored by beachgoers. The beach itself, a beautiful strand, sits directly opposite the large, sloping green.

The point-counterpoint climax at Royal Kaanapali is classic Jones. No. 17 is a petite par 3 that calls for an unerring shot over a pond to a generous target guarded by bunkers to the right and behind the green. The par-4 eighteenth, 440 yards at full stretch, was singled out by Arnold Palmer as one of the most challenging finishing holes he had ever played. Water runs in front of the tee and along the right side of the fairway. Water also cuts in front of the right corner of the green. There is bail-out room to the left, but as is true throughout the course, the safe, conservative play generally yields a bogey, not a par. No risk, no reward.

Even our host, head pro Sutee Nitakorn, a brilliant young player with a storehouse of local knowledge (he’s a native Cincinnatian of Thai descent), failed to match par here.

Scores were tallied in Roy’s, the superb Hawaiian fusion cuisine restaurant on the upstairs floor of the clubhouse overlooking the practice putting green. Appetizers, from pot-stickers to spring rolls, are served in a long canoe-like dish.

There are better-known and more glamorous places for a game in Maui, but Royal Kaanapali, one of only two Robert Trent Jones, Sr. courses in Hawaii (the other is Mauna Kea), is a gingerbread-free test with genuine championship pedigree. As we found out, it was designed for well-rested purists, not road-weary Warriors.