Simply said, Kapalua’s Plantation Course was one of the genuine highlights of the trip. Never mind the fact that at least one Golf Road Warrior made a deal with Pele, the volcano goddess, to have his scorecard scorched in molten lava after the round. To be honest, my score was insignificant. To play the Plantation Course, a spectacle unto itself and a golf experience unlike any other in Hawaii, was a privilege.

Opened in 1991, the Plantation showcases the design ingenuity of Bill Coore and Ben Crenshaw, who must have puzzled over dozens of different routings before deciding on one that ladled 18 holes onto four steeply pitched lava fingers creased by deep verdant ravines.

Players get a taste of what’s to come at the very first hole, a downwind par 4 that introduces the character, scale and drama of the layout. From the Resort tees (we played a Combo of the Resort and Regular markers, totaling 6,330 yards, par 73), this immensely proportioned hole tumbles downhill, the fairway bunkers on the left side of the hole replicating the waves splashing against the peninsula in the far distance. The target is a huge, tilted green sited on the far side of a chasm. There is plenty of bail-out room to the left, but the speed and contour of the green is, despite the friendly warnings  from our hosts, truly alarming.

I played here 21 years ago shortly after the course opened with former director of golf Gary Planos and Mark Rolfing, the well-known golf telecaster. I frankly had forgotten that the Plantation Course is the antithesis of target golf. Davis Love III, a former champion here and an ardent fan of the course, said, “You can throw away the yardage book on the Plantation. It’s all about feel and playing the slope and the trade winds.”

Is it ever. It’s also about hitting blind tee shots over hilltop markers (as at the par-4 fourth and 10th holes), or aiming 50 feet to the right or left of a pin to gain access to it, and putting (not chipping) the ball from off the greens for best results, as is done on a firm Scottish links. Imagination and creativity are required to score.

However, Coore and Crenshaw weren’t interested in building a course that only the pros could play. The average player armed with a wind-cheater can find his way around the Plantation from the Resort tees without undo difficulty. Keeping one’s ego in check is mandatory, of course. Big gambles rarely pay off on the Plantation, which by turns reveals itself a vast playground tilted to the Pacific, its array of unique, one-of-a-kind holes lying gently on the sloping terrain. You hear a lot about “grand-scale” courses, places like Bethpage Black and Oakmont, but the Plantation could slip each and every one into its back pocket with room to spare.

The biggest course in the world? The Plantation fits the bill.

To what the designers called an “untraditional” site, traditional design concepts were applied, including those pioneered by C.B. Macdonald at the National Golf Links of America in Southampton on Long Island, New York, the nation’s first great layout. That may be so, but the Plantation and the National are as different as Mars and Venus.

“It’s about golf, but it’s also about art, texture, lines, composition and angles,” Coore said after the course opened. “A golf hole has to look comfortable in its surroundings, as if it belonged there for generations.” The Plantation makes the grade. Tall native grasses frame the fairways, with a few stands of Norfolk pines scattered around the perimeter. No water comes into play. Golfers can drink up the views by gazing at the wave-capped Pailolo Channel, the island of Molokai rising from its depths like a King Kong playground.

Crenshaw, renowned for his putting prowess, co-authored enormous greens that are every bit as contoured and racy as those at Augusta National. As on all classic courses, these putting surfaces were left open in front. Bump-and-run approach shots are essential. An aerial attack is doomed here.

What I noticed during the round is that the Plantation is both a strategic and aesthetic triumph. For example, at the 11th, the back nine’s lone par 3, the green mirrors the sea cliffs a mile down the slope, with ant-sized surfers bobbing in the swells of Honolua Bay far to the north. The shot itself must cut through a crosswind and use the slope of the green to funnel the ball to the pin. It’s a familiar theme on a course that has as many natural defenses as any I’ve played.

For me, the back-to-back par 4’s at Nos. 13 and 14 perfectly encapsulate the Plantation’s personality. The 13th, which we played at 333 yards (it’s 407 yards from the tips), plays uphill and into the wind, with a big target bunker up the right side. The green, nearly 40 yards deep, is your basic herd of buried elephants. Phil Mickelson has not returned to the Hyandai Tournament of Champions since he putted off this surface into a greenside bunker.

The 14th, a petite 275 yards from the Combo tees, is very deceptive. The fairway swings uphill and to the right around a phalanx of bunkers to a tiny plateau green, the smallest on the course. On the heels of the previous hole, this green in laughably tiny and very slippery. Ben Hongo, director of instruction at Kapalua Golf Academy and a serene witness to our many blunders, termed it the fastest green on the course. 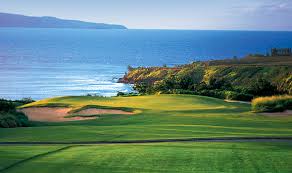 A typical gravity-defying moment on the Plantation

Like every great venue, the Plantation finishes with a flourish. With a following wind, the 17th, a mighty par 4, drops over 100 feet to a wide, sloping fairway, with the approach played over the corner of a bottomless gorge.

The famed par 5 18th, 663 yards at full stretch, is familiar to viewers of the PGA Tour’s season-opening event. It is also the hole around which the rest of the course was formulated, according to the designers. With the assisting winds and favorable slope, the Plantation’s home hole can be reached with two powerful blows, and I’m proud to report that fellow warrior and noted muscleman Tom Bedell was able to accomplish this feat. Like many before him, he was happy to get down in three from 50 feet for par.

With an open hole behind us, I stood on the 18th green for a moment to digest the round and contemplate the vastness all around me. Damn the score—armed with local knowledge, I know I could do better next time on a course that occupies its own special place in the Splendor and Challenge departments.