The Golf Road Warriors Maui extravaganza is officially underway, a.k.a. Hackers in Paradise!

On a warm, sultry day, the Kona winds chasing the clouds across the sky, we played our first round on the Gold Course at Wailea Golf Club. Former home of the Seniors Skins Game, among other competitions, the Gold Course is a solid, championship-caliber test, its holes terraced at different levels into volcanic foothills.

Shielded from inclement weather by the looming mass of 10,023-foot Mt. Haleakala, Wailea receives less than 10 inches of rain per year. You see and feel the aridity on the Gold Course: ancient lava rock walls, non-irrigated native grasses, thick groves of kiawe and wiliwili trees, nearly 100 strategically-placed bunkers. Of course the deep blue Pacific, in view from nearly every tee and green, provides plenty of visual refreshment.

We were fortunate to have head pro Rusty Hathaway in our group. Rusty, an Alaskan native who’s been on the job at Wailea for over 35 years, was here when the Gold and Emerald courses were built in the mid-1990s. He characterized the Gold as a masculine course, an austere, rugged layout with no frills or window dressing. (The Emerald, by contrast, he described as feminine in nature, with more flowers and fewer bunkers).

A classic, low-key design with excellent pace and variety, the Gold drops 200 feet from top to bottom and has plenty of built-in drama. The opening tee shot is very inviting. This superb par 4 drops sharply to a sloping fairway that swings to the left around a nest of bunkers in the corner of the dogleg. I laid back with a 3-wood, which left me a testing shot from a downhill lie to a large, sloping green. I hit a good shot, grabbed my putter and decided to walk to the green. To the right side of the fairway near the putting surface is an impressive lava rock formation that once served as a lookout for fishermen. Hand-built centuries ago, it’s an enduring landmark that, like the sinuous papohaku (lava rock walls) throughout the course, were expertly woven by Jones into his design. 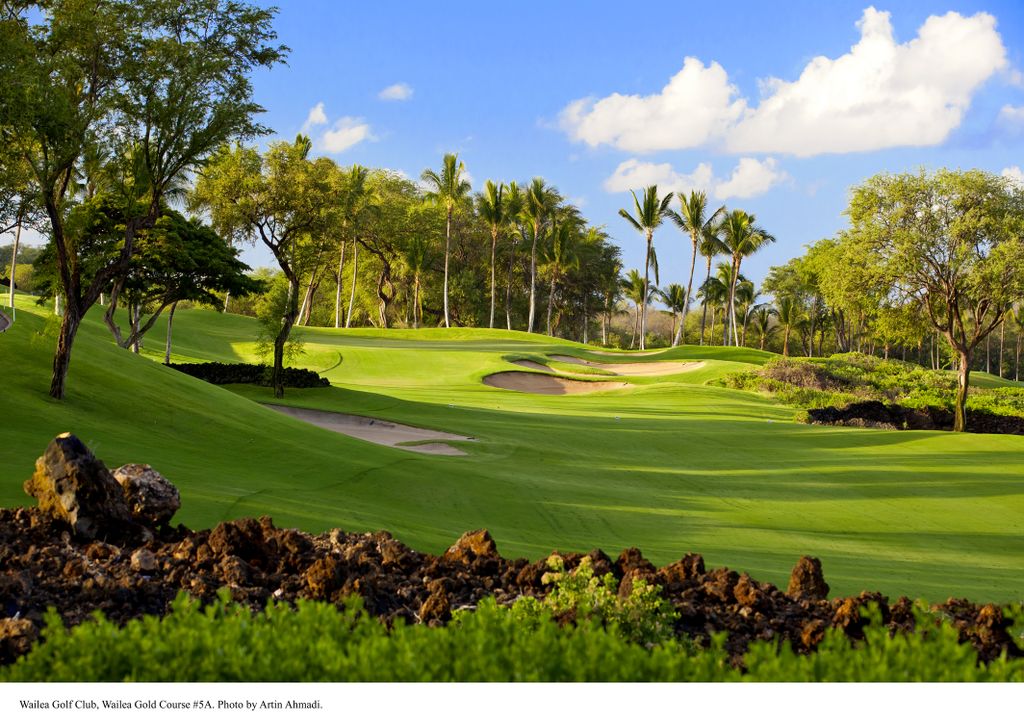 The fifth hole at Wailea Gold

Maybe because he understands that golfers like to have fun, Jones built a pleasant short par 4 at No. 6 that measures an inviting 241 yards from the white tees. Driveable? Yes, but large bunkers are strewn across the line of play. As on No. 1, I laid back for safety and was rewarded with a straightforward 90-yard shot to a green sloped from back to front.

I respectfully salute the brawny par-5 seventh, which the locals call Huaka’i Loihi, or Long Journey. Jones likes double-dogleg par 5’s, and No. 7 is a doozy. This uphill hole, by far the longest on the course at 590 yards from the tips, will test anyone’s muscles and high-tech gear, but it’s a strategic gem, not just a long slog.

The par-3 eighth hole is a glossy Maui postcard. From an elevated tee, players are treated  to a beautiful tableau of a lava rock wall in the foreground, the target a sizable green staked out by swaying palm trees and a trio of large deep bunkers. The Pacific floods the horizon beyond the putting surface, with the crescent rim of Molokini, a submerged volcano, peaking above the waves. Into the wind, which is how we played it, the eighth calls for an unerring tee shot.

The Gold’s slightly longer back nine was every bit the equal of the front. The 11th, only 135 yards from the whites, looks pretty simple, but I managed to find one of the five bunkers that protects the putting surface. The two par 5’s on the back nine, Nos. 13 and 15, both measured under 500 yards from the white markers and presented scoring opportunities. And the par-4 18th, which bends to the left and drops sharply to a green tucked in a hollow, is a fun driving hole that favors a draw. The green, set below the sleek, flower-decked clubhouse, is backdropped by the sea. It’s among the prettiest finishing holes I’ve played in Hawaii.

There’s something else that’s very appealing about the golf experience at Wailea. The Gold and Emerald courses were both purpose-built layouts. There are no roads or houses or other reminders of civilization to detract from the golf experience.

I also like the fact that the Gold, while it has championship credentials, functions as a delightful resort course from the forward tees. Smart shots are rewarded, but in the event of a mishap, the penalties aren’t too severe. The landing areas are generous, the rough is kept short, out-of-bounds is rare and water comes into play on only two holes. The Gold rewards strategy and finesse, but it won’t turn rusty snowbirds upside down and shake the daylights out of them.

They say emeralds are more precious than gold, but Wailea’s Gold Course will be a tough act to follow.