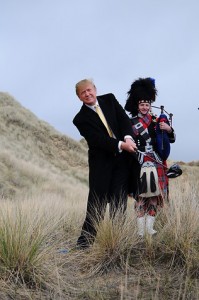 Ever tasteful and restrained, Trump goes course-building in Scotland

The thought of Donald Trump rolling up his starched French cuffs to stamp his inimitable brand on a remote corner of Scotland is repellent to me.

Probably I should be happier. After all, the golf development scene is mighty flat these days.

But the recent news reports detailing Trump’s much-ballyhooed project are genuinely deflating. After nearly five years of bitter legal battles with local and national officials entailing nine planning applications, lengthy public enquiries and an investment exceeding $60 million (no doubt of Other People’s Money), the Aberdeenshire Council finally caved in on June 29, 2010. Reversing an earlier negative vote, the local council, under pressure from political heavyweights in the Scottish government, granted full permission for the construction of Donald J. Trump’s new course in the northeast of Scotland. The name of the development is a foregone conclusion: Trump International Golf Links Scotland.

Like water over a rock, this brazen developer and relentless self-promoter has outlasted even the flinty Scots, who I am quite sure have no use for The Donald, despite the fact that his mother was born on the Isle of Lewis in Scotland’s Outer Hebrides. Local opposition, epitomized by a 57-year-old fisherman who lives on site and has refused to sell his land, were not enough to halt approval of the grandiose 1,400-acre development, which is slated to have 500 single-family homes, 950 vacation houses, a 450-room hotel, 36 golf villas, a village center and, eventually, a second 18-hole golf course. The anticipated price tag? In the neighborhood of $2 billion. For that amount of money, maybe Trump can get the sun to shine more often in Scotland’s bleak northeast corner.

With full planning approval and a “zero restriction” permit in hand, work on the layout, located 10 miles north of Aberdeen on a former bird hunting preserve called the Menie Estate, began on July 1.

“My team will finally get to work and build the world’s greatest course for Scotland and for the great game of golf,” Trump blustered, neglecting to mention that the project is a gilded real estate play to be foisted upon the credulous luxury market. “We are building on the finest piece of land I have ever seen and we will turn it into a national jewel—people will travel from around the world to play the course and experience its beauty.”

Last winter, Trump told the Aberdeen Evening Press, “When people look back, in years to come, they are going to be proud of what will be, without doubt, the best golf course in the world.” Even before the first shovel went into the ground, Trump said the links would be a worthy venue for the Open Championship.

Then again, Trump indicated shortly after he purchased Ocean Trails in Rancho Palos Verdes, Calif. that the course, following his extensive revisions and now known as Trump National Golf Club, Los Angeles, was better than Pebble Beach, and that the USGA would be crazy not to bring the U.S. Open to his course.

Maybe it’s my mistake to take his carnival barker chat seriously. Normal folks probably just ignore or dismiss him. Still, when outright falsehoods are uttered, I tend to take the bait. The Scottish business community has embraced the project, but locals wonder why a 300-acre stretch of pristine dunes designated by Scottish National Heritage as a “Site of Special Scientific Interest” would be usurped to satisfy a billionaire’s ego.

According to a July report in Herald Scotland, Trump faces continued opposition from local protesters, despite the arrival of earthmoving equipment. A group called Tripping Up Trump (TUT) has been formed and has purchased land on the estate in an effort to thwart the development. One of the TUT protesters is British filmmaker and Labour peer David Puttnam.

“This saga is the real-life version of a film I made over 25 years ago,” Puttnam said. “Local Hero had a happy ending when the American developer came to his senses and withdrew with dignity. It would be great if Trump would watch it.”

Trump would rather gaze into the mirror than look at an old movie. The developer told the Aberdeen Press & Journal that he was going to have an input in the design of all the holes, and that “they are all going to be hard.” What comes to mind is a recent ad in The Met Golfer, the New York-area regional publication. It is dominated by a photo of The Donald in full follow-through position, his hands high, his self-satisfied smile indicating that he has crushed another drive. “Do You Have Enough Game?” the headline screams.

While it has tremendous promise based on the many nature-made holes to be found in the tumbling dunes, the new links, scheduled to open in 2012, may not turn out to be the best course in the region, much less the world. Right now, the area’s finest course is Cruden Bay, an epic, quirky links routed among towering sand hills above the North Sea, a grand test redesigned in 1926 by Tom Simpson and Herbert Fowler from an earlier creation by Old Tom Morris. It’s only 12 miles away from Trump’s nascent manifesto. Royal Aberdeen and Murcar, both highly rated, are also in the neighborhood.

But even Hawtree, who usually lets his work do the talking, has gotten into the act. He told the Press & Journal, “The layout as conceived would contain no weak holes…it will produce simply the most dramatic, stimulating stretch of golf anywhere I have seen.” Which is saying something. Among other storied links, Hawtree has retooled Portmarnock and Lahinch in Ireland, Muirfield and Carnoustie in Scotland, Royal Birkdale and Formby in England. The man has serious credentials and peerless pedigree. But clearly he’s drinking some of The Donald’s hootch.

Arguably the world’s most famous businessman—only Bill Gates, Warren Buffet and a handful of others can contend— Trump, a master of calculated calumny and showmanship, has steadily promoted the links in typical bombastic fashion as a world-class championship facility that the R&A would be foolish to ignore as an Open venue.

On the plus side, at least Trump hasn’t proposed the construction of a deepwater well offshore of oil-rich Aberdeen. For now, he seems intent on building a gusher of a golf course—so he can sell gobs of high-end real estate in a region of Scotland known for its chilly, inclement weather.

The ceremonial first tee shot has reportedly been reserved for 007 himself, Sean Connery, a Scotsman who’s probably more pragmatic than most. While many of his countrymen might choose to do otherwise, Connery will likely take dead aim—at the fairway.

One Response to “Auld Sod Gets Trumped: The Donald’s New Links Gets Underway”