“Our environment is part of us. How we care for our environment and live with it, utilize and enjoy it, determines the kind of people we are and will be.” –Laurance Rockefeller 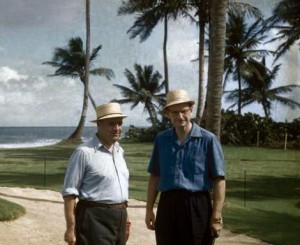 The recent news that Jamaica’s Half Moon resort will be managed by RockResorts beginning in 2011 brought back memories of the renowned conservationist and businessman who initially resisted the use of the name “RockResorts” because he considered it, um, undignified.

A pioneering venture capitalist who used his family’s oil fortune to underwrite aviation start-ups  and other bold enterprises, Rockefeller’s primary motivation as a resort developer in the 1950s and ‘60s was the preservation of one-of-a-kind sites. An environmentalist long before the term became popular, Rockefeller’s concept of the ideal resort was a place where movers and shakers could relax, let down their hair and return to Eden. It wasn’t about the bottom line. Billionaires can afford not to dwell on profit. His standard was “understated perfection in beautiful, unspoiled places.”

Having selected the finest and most pristine site he could find, Rockefeller set about acquiring huge amounts of land, the better to buffer the resort from outside commercial interests. (The pattern was set by his father, John D. Rockefeller, Jr., the founder of Standard Oil who purchased 33,562 acres of Wyoming land in the 1920s. The tract later became Grand Teton National Park, with Jenny Lake Lodge at its core).

Years later, Laurance created his first resort, Caneel Bay on St. John, as an act of benign imperialism. This tropical getaway resides within Virgin Islands National Park on lands he donated to the United States through the family trust.

Rockefeller, who had an unerring eye for superb locations, came across Caneel Bay while sailing through the islands in 1952. Occupying a 170-acre peninsula flanked by the Atlantic Ocean and the Caribbean Sea, the St. John site, with seven distinct beaches, was exquisite. Three years later, he began developing basic infrastructure on the island to provide his fledgling resort with road access, electricity and fresh water.

Rockefeller’s retreats weren’t for everyone. He believed in bringing travelers closer to nature, not divorcing them from it. Caneel Bay’s rustic bungalows, a study in “casual luxury,” were cooled by ceiling fans designed to circulate the island’s tradewinds. (The hotel, operated by Rosewood since 1993, still has ceiling fans but has since added air conditioners). Early brochures extolled the “spacious spirit of freedom…(where) landscaping and design enhance rather than inhibit the tranquil beauty of the environment.” When Caneel Bay opened in 1956, Rockefeller insisted that there be no phones, clocks, televisions or other reminders of the workaday world in the guest rooms. Today, of course, there is wireless internet access in the rooms, but never mind.

By the mid-1960s, the guest list at Caneel Bay read like a Who’s Who of politics, show business and high finance. As a member of one of the first families of American civic, social, economic and philanthropic life, the urbane businessman, who piloted private planes for sport, was a tastemaker for the upper class. If he implied through his unadorned resorts that it was better to commune with nature—the Thoreauvian goal—than to lounge around in a conspicuously luxurious hotel, then the folks who revered the Rockefellers would follow along. Well ahead of his time, Rockefeller redefined the concept and purpose of a high-end vacation.

Fortunately for golfers, Rockefeller was an avid if less than accomplished player. When he contacted the USGA in the 1950s to inquire about golf course architects, he was given the name of Robert Trent Jones. A partnership was formed that produced a handful of bespoke golf resorts that stand apart to this day. These two visionaries sparked each other to new creative heights, Rockefeller turning up one superb site after another, Jones evolving new construction techniques to cope with the often difficult conditions.

“Everything he did was tops,” Jones said of Rockefeller’s resorts. The same could be said of Jones’ layouts, which were built during the prime of his career.

Their first chance to work together came in 1958 at Dorado Beach in Puerto Rico. Jones discovered that the soil composition of the 1,700-acre site was mostly sand. An army colonel from a local club insisted that any attempts to grow grass on sand would fail. Jones disagreed. “The Scots have been growing grass on sand for centuries,” he told Rockefeller. “All you need is water and fertilizer.” He was right. Even today, the turf at Dorado’s East and West courses, now managed by Kemper Sports, is excellent.

In 1960, the Pacific beckoned. William F. Quinn, Hawaii’s first state governor, organized a tour of the islands for Rockefeller, hoping their beauty would compel him to build a resort that would spark tourism. Along the Kona coast of the Big Island, Rockefeller spotted Kauna’oa Bay and its broad crescent of white sand beach below an ancient lava flow. Rockefeller, setting aside considerations of the area’s remoteness and arid climate (annual rainfall is eight inches), brought in Jones to design a course on the desiccated remains of the flow. Jones adapted machinery to pulverize the lava and manufacture the soil in which grass seedlings could sprout, all the while retaining the natural features of the site. Mauna Kea, restored by son Rees Jones in 2008, remains one of the designer’s crowning achievements. The open-air Mauna Kea Beach Hotel, now affiliated with Prince Resorts, still displays Rockefeller’s priceless 1,600-piece collection of Asian artifacts. It is and always will be the grand dame of Hawaiian resorts.

Mauna Kea in all its glory

Alas, nothing good lasts forever. Little Dix Bay on Virgin Gorda in the British Virgin Islands, opened in 1964, was the last resort personally conceived by Rockefeller. Two years later, RockResorts was created as a management arm to oversee the daily operations of his properties. Dorado Beach was sold to Eastern Air Lines (in which the Rockefeller family had a major investment) in 1968, while his other properties, including Mauna Kea, were later unloaded after Rockefeller realized he was losing money on his ventures. In essence, he was subsidizing the holidays of the rich and famous. The uncompromising vacation experience he provided far outstripped what people were paying for it.

By 1986, when CSX Corporation, a transportation behemoth, acquired RockResorts, the company’s unwritten mission statement had vanished. CSX poured too much cement in building the accommodations at Caramabola in St. Croix, U.S.V.I. (The golf course, known as Fountain Valley when Jones designed it for Rockefeller in 1966, remains one of the Caribbean’s hidden gems). CSX also lost the management contract at The Boulders in Carefree, Ariz., a model property that fully embraced Rockefeller’s reverence for the environment. CSX later sold the brand to VMS Realty in 1989. The properties were sold off and the brand remained dormant for 10 years.

Vail Resorts, Inc., a luxury resort hotel company based in Colorado, acquired a majority interest in RockResorts in 2001, assuming full ownership and relaunching the brand in 2005. In its literature, it references Laurance Rockefeller’s “philosophy of living in balance with nature and the universe,” though none of the properties in the company’s fold trace their lineage to Rockefeller. However, the accommodations, spas, restaurants and activities at its 12 resorts, eight of them located in the American West, are top-notch. The firm’s three Caribbean properties, The Landings St. Lucia, Balcones del Atlantico in the Dominican Republic, and now Half Moon in Jamaica (home to a refurbished Robert Trent Jones-designed layout), are peerless. The same cannot be said of the recently opened Tempo Miami, a hotel and spa within the soaring 67-story Marquis Residences located across the street from the American Airlines Arena. This is not the place to commune with nature. But overall, Vail Resorts has been the best custodian of the RockResorts brand in the 24 years since the Rockefeller family sold out to CSX.

Laurance Rockefeller passed away in 2004 at the age of 94. As a creator of simple yet elegant resorts that embraced nature, he was way ahead of his time. I’ve been encouraged by smaller hotel firms that strive to build unique, sustainable resorts, but to my knowledge, only one man in the world of hospitality was able to use a silver spoon as a tuning fork for excellence.

One Response to “The Legacy of Laurance Rockefeller”