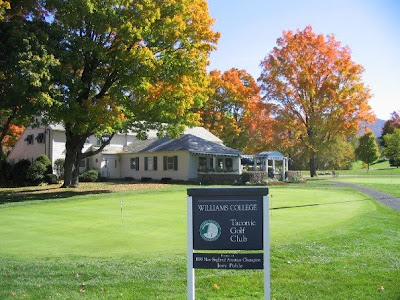 Taconic GC is the home course of Williams College

Seeking to complete your education as a golfer? An entire semester of advancement can be had in the course of a single round at Taconic Golf Club in Williamstown, Mass.

This is especially true in the fall, when the forested peaks surrounding the course are ablaze with the colors of autumn.

According to the club’s website, “Of the 375 courses judged by the Boston Globe, Taconic was voted number one in scenic beauty in the state.” No argument there. For character, charm and jaw-dropping views, Taconic, a jewel-like layout walled in by the Berkshires in the state’s northwest corner, has few rivals in New England.

There is more. Located on the campus of Williams College, Taconic got its start in 1896, when “three men with three tomato cans” laid out a rudimentary course. In 1927, Wayne Stiles of Stiles & Van Kleek, a Boston firm, was brought in to expand and refine the course. Two years ago, Gil Hanse, a classicist with a light touch, completed a much-needed restoration of the original design. His nips and tucks have resulted in a near-flawless layout that now takes its place among the very best collegiate golf courses in the nation. (Among the vintage venues, Taconic in my opinion is second only to Yale).

For his part, Stiles found his ideal canvas at Taconic, molding holes to the glacier-carved terrain and taking full advantage of the abrupt elevation changes. The course, like Williamstown itself, sits in a bowl, with tall, curved ridges dominating views from the topmost holes. On a clear day, the Green Mountains of Vermont crowd the horizon to the north.

Seemingly innocuous on the card–the black tees are listed at 6,808 yards (par 71)—Taconic, like studying Latin, is anything but easy. The front nine, short and tight, offers scoring opportunities,  but the corridors tend to be narrow and nearly every approach is defended by clumps of trees,  grassy swales and deep bunkers. Many of the putting surfaces are perched above fairway level, further complicating the issue. When these greens are rolling fast, as they are now after the makeover by Hanse, an approach shot placed above the pin is in three-putt territory. By the way, if you have a complaint about the false fronts on the greens or the numerous sidehill lies, there’s a suggestion box fixed atop a pole in a weedy stream at the fourth hole.

In the wake of a recent Gil Hanse restoration, Taconic is a well-groomed classic.

Taconic’s longer, grander back nine proceeds to higher ground, with lofty mountain backdrops for many of the tee shots. There’s a little history here, too. An engraved rock behind the tee at the par-3 14th commemorates a hole-in-one made by Jack Nicklaus during the 1956 U.S. Junior Amateur Championship. (Jack, 16 at the time, was eliminated in the semi-finals). It’s a feat worth attempting to duplicate, although the hole plays a little tougher than it looks from 163 yards.

While many older courses simply cannot give muscular underclassmen wielding high-tech equipment a proper tussle, the final holes at Taconic were designed to test the varsity. Both the 441-yard 15th and 460-yard 16th holes are major par fours that invite players to have a rip off the tee but are very unkind to offline shots. The magnificent par-3 17th, 246 yards at full stretch, rewards canny veterans who can bounce the ball off a hillside to the right to gain access to a  green that is sharply pitched from back to front. The 18th, a straightaway par five recently lengthened to 545 yards, has OB left and tends to produce as many double bogeys as birdies.

In addition to its expansive pastoral beauty, what I like most about Taconic is its appeal as a match-play golf course. And its adherence to tradition. A sign outside the golf shop reads: “No Preferred Lies–We Play Golf Here.” There is also a firm expectation that a round of golf at Taconic should not exceed four hours. Lastly, only the home club of a distinguished liberal arts college would print a Latin inscription from Ovid on its scorecard: “medio tutissimus ibis,” which translates loosely as “you will go more safely down the middle.”

When the ancients exhort you to hit the ball straight, it’s worth bending an ear.

If a scenic test replete with Yankee quirkiness suits you, Taconic is the perfect place to earn your a dimpled diploma. http://taconicgolf.net/

2 Responses to “Taconic Golf Club: A Higher Education in the Berkshires”