In years past, on my way to Newport and points east, I used to drive by Meadow Brook, a public course in the tiny town of Richmond, R.I. Slowing down to 30 m.p.h. to observe the scraggly layout, I wondered to myself, “Why on earth are golfers wasting their time on this goat ranch?” It was like that back then. No longer.

Reopened in April, 2010 after four years of reconstruction, the new Meadow Brook is the result of Yankee ingenuity and a new design partnership that carries the torch for the late Robert Trent Jones.

Anchored by an old roadside farmhouse soon to be replaced by a new golf clubhouse, Meadow Brook is owned and managed by the Hendrick family, which owns two other public tracks in Rhode Island. The father-and-son team of Pete and Jay Hendrick knows every nook and cranny of their courses. Working closely with their architects—more on them in a moment—the Hendricks served as their own contractors, operating the machinery to clear trees, create contours and plant grass. They essentially built the course themselves.

A cow pasture no more, Meadow Brook, at 7,468 yards from the black tees (par 72), is the longest and probably the toughest course in Rhode Island. At 6,532 yards from the green tees, Meadow Brook presents a sturdy test for the better-than-average golfer. Women do fine from the reds at 5,308 yards. Players throughout the region, who generally are underserved by high-quality daily-fee golf, have the Hendricks and the handiwork of Rulewich & Fleury Golf Design to thank.

A word about Roger Rulewich, the firm’s guiding principal. A mild-mannered, pipe-smoking gentleman known to many in the business as “Roger Trent Rulewich,” he was for 34 years the man behind the scenes for the ebullient Jones, a master salesman and promoter who left much of the field work to Rulewich and his staff.  A keeper of the flame, Rulewich embodies Jones’s “hard par, easy bogey” credo and strives to recreate his grand, heroic style with the use of runway-style tees, giant cloverleaf bunkers and water hazards often large enough to float a destroyer. As evidenced by the massive courses on Alabama’s Robert Trent Jones Golf Trail, all of them crafted by Rulewich, this Jones disciple favors BIG golf.

It’s a wonder Rulewich, now 73, ended up in the golf design racket at all. After receiving a degree in civil engineering from Yale University in 1958, he contacted the school’s placement office in 1961 in hopes of landing a job with a regional engineering firm. When he was told there was an opening with a “building” architect, Rulewich assumed he would be involved in planning and developing real estate sites in the New York metropolitan area—precisely what he had been trained for.

Little did he know the “building” architect was Robert Trent Jones, and that what he would be planning and developing were not edifices but golf courses.

“I knew nothing about building golf courses, but I figured I would give it a try,” Rulewich remembers. “I basically learned by osmosis. Mr. Jones was traveling all the time and I was thrown into situations. It was the best thing. Somehow I became a golf course architect.”

And a busy one at that. Despite the fact that he received little national attention, Rulewich, the man in the field for the globetrotting Jones, was among the world’s most active course architects for over three decades. While he credits Jones with “just about everything I know,” Rulewich became a student of golf design, picking up ideas from the likes of Donald Ross, C.B. Macdonald and Alister Mackenzie. In the end, he believes every good designer should have his own vision. For Roger, that vision is more along the lines of the Empire State Building, not a Park Avenue townhouse.

Earlier this year, Rulewich joined forces with his long-time associate and protégé, David Fleury. Their partnership is an outgrowth of the Rulewich Design Group, which has been based in Bernardston, Mass. since 1996. After a stint with Jack Nicklaus, Fleury joined Rulewich’s firm 11 years ago. In addition to his background in business and agronomy, Fleury has worked as a shaper, one of the most under-appreciated professions in golf course design.

Meadow Brook represents the first result of their collaborative efforts. Spread across 225 rolling wooded acres, the course is distinctive, if diametrically opposed in style to every other layout in Little Rhody.

Over the centuries, a sand belt in south-central Rhode Island has propagated the growth of conifers, which combined with mature oaks and other hardwoods create a pleasing frame for the holes. Except for landing strip tees, all the other ‘Trent Rulewich’ trademarks are here, from enormous sculpted bunkers to huge rolling greens that average nearly 10,000 square feet. Meadow Brook resembles a big-shouldered course that Jones, with a decent budget, might have created in the temperate zone in his heyday. 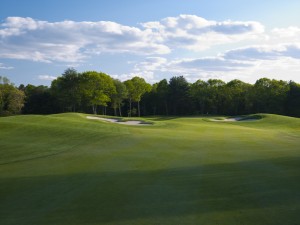 Classic Trent Jones bunkers frame the approach at No. 12

Ironically, the Ocean State is known mainly for its small vintage courses, many of them laid out by Donald Ross, who maintained a summer home in Little Compton, R.I. A case in point is Wannamoisett Country Club in Rumford, the state’s top-rated track. “A fine course on 100 acres of land,” Ross said of his 1914 design. “No congestion, fine variety and excellent golf.” At full stretch, the course measures 6,688 yards (par 69).  There’s only one par five. Most players have all they can handle from the white tees at 6,399 yards.

While I prefer the old charmers Ross built for his elite clientele—except for Triggs Memorial in Providence and Winnapaug in Westerly, all of his Rhode Island courses are private—there’s a nice egalitarian atmosphere at Meadow Brook. The parking lot is sandy gravel. The weekday green fee for walkers is $60. The Gatsby crowd is noticeably absent.

The presentation of challenges at Meadow Brook is thoroughly modern. You’re invited to tee it high and let it fly with your high-tech driver. The fairways are generous, but the rough consists of an “environmental mix” that’s thick and sticky. There’s also water in play at seven holes, but the ponds are scaled to the size of New England, not Florida. The layout’s eponymous stream also winds through the course.

The bentgrass greens, most of them of the pedestal variety favored by Jones, are the size of skating rinks. They are quite firm and very fast. And undulating. Perhaps Rulewich & Fleury, like other designers, have concluded that putting surfaces are their last line of defense given current advances in ball and club technology.

With its sandy soil, mixed forest and gentle elevation changes, Rulewich believes the site for the course is one that “would have been chosen in the early days of golf course design. To have as its proprietors a family so involved in every aspect of its creation and operation is very special. I am thrilled to have been a part of it.” For a man who expected to erect buildings for a living and yet who learned to plan and strategize a golf course with the best of them, Meadow Brook is a shining example of a BIG layout in the classic Trent Jones style. www.MeadowBrookGolfRI.com.