To paraphrase Mark Twain, who once said, “Everyone talks about the weather but no one does anything about it,” golf’s ruling bodies talk about growing the game, but few of them do anything about it.

I’m happy to report that Lyman Orchards, a family-owned facility in central Connecticut located 30 minutes south of Hartford, has taken it upon themselves to make a difference. Already home to two 18-hole courses, the club recently opened a new Golf Center featuring a nine-hole, par-29 layout called the Apple Nine; and a practice facility with a 40-stall driving range (grass and artificial turf) accented by target greens. There’s also a short-game practice area and a just-right 2,000-square-foot clubhouse.

“We’re ecstatic to open The Golf Center,” said Steve Ciskowski, president and CEO of Lyman Orchards.”It goes hand-in-hand with our two courses and reinforces the Lyman family’s forward-thinking commitment to promote the game of golf and attract new players.”

I saw more kids swinging clubs and more delighted parents the day I visited than I have at any course in recent memory. Designed by Mark Mungeam, who worked with the late Geoffrey Cornish for decades, the Apple Nine has three sets of tees: Back (1,556 yards), Middle (1,380 yards) and Front (1,211 yards). 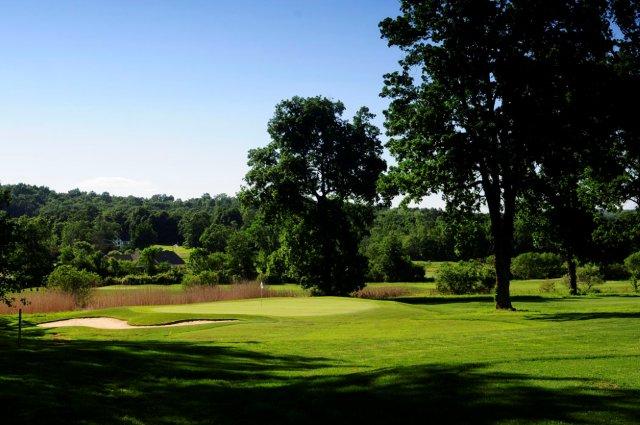 Experienced golfers tend to forget how daunting the game can be for novices and children. It’s been said that distance is the only obstacle that a golfer cannot overcome. The Apple Nine solves that problem. A five-year-old with a free swing can actually whack the ball onto a green in regulation here. I know. I saw little Madeleine do it on the par-3 fifth hole, which measures 76 yards from the Front tee. She didn’t know what to think of me when I asked her for her autograph.

The holes, routed in a valley below the 36-hole complex, are perfect for family golf: two short par 4’s and seven par 3’s, each of which can be conquered with a decent shot. The bentgrass greens, built to USGA specifications, are very good and will improve with time. During my round on the Apple Nine, I saw a group of teenagers playing a Skins game for sodas; a dad with three young sons who would hit and then sprint after their shots; and a winsome mother-daughter twosome in identical golf togs. All having fun on a pared-down, walker-friendly course that takes 90 minutes to play if you really take your time. The Apple Nine is the only new course that will open in Connecticut this year. It is also the most welcome, especially with a weekday rate of $12 for juniors (13 and under).

Then there’s the Golf Center. For sensible folks who want to master the basics (and ingrain good habits) before flailing away, the Golf Center is the place to go. While spacious and well-planned, what I liked most about the center was its diverse learning menu and its sliding scale for rates. For example, private, semi-private and group lessons are available at different price points.

Under the tutelage of one of the center’s six instructors, the V1 Golf Video Swing Analysis software captures and analyzes each student’s swing. Personally, I learned the game by feel, but today’s generation is more attracted to visual touchstones. For them, seeing is believing. And because scoring in golf is dependent on sound putting, the Tomi Putting Analysis system can be used to measure path, face angle and stroke tempo. 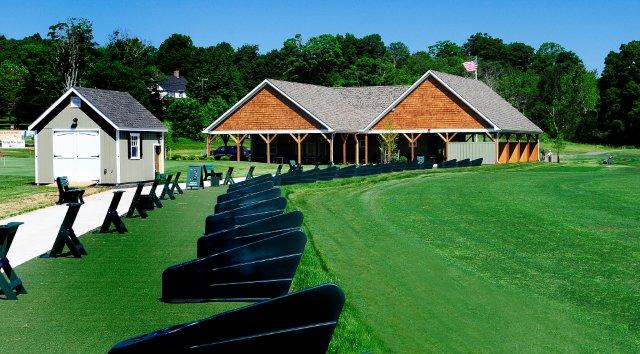 The Golf Center is a great place to refine your game

For advanced players, The Golf Center’s Foresight GC2 Launch Monitor measures ball velocity, vertical launch angle, back spin, side spin, total spin and distance. Me, I’m happy with solid contact. But there are serious low handicappers who stand to benefit from scientific feedback. They can find it here.

It was fun to see dads on the range helping their kids get acquainted with the game. My children are grown, their bags of clubs a permanent fixture in the basement. I’d forgotten what it’s like to see youngsters whaling away to their heart’s content, and to hear squeals of joy when they connected with the ball, sailing it high and far.

If they stick with it, these kids have a lot to look forward to. The club’s Robert Trent Jones course, opened in 1969, is a classic parkland-style layout built by one of the sport’s greatest designers. Treated to a $2 million overhaul in 2009, the 7,011-yard layout’s front nine circulates players around the floor of a gently rolling valley, the holes framed by woodlands and grassy mounds. With its clever doglegs, undulating greens and water in play at seven holes, the incoming nine on the Jones course is testing but fair.

Its counterpart is the Gary Player course, which debuted in 1994 and ascends to the high point of the 1,100-acre Lyman Orchards property. This 6,725-yard, par-71 course takes players through apple orchards as well as forests of hardwoods and pines. There are a few quirky blind shots, and players quickly learn not to automatically hit driver on every tee, but a round here is highlighted by the thrilling 11th and 13th holes. Each is a jaw-dropping downhill par 3 that serves up a panoramic view of the region’s wooded ridges and verdant valleys.

More than a golf facility, Lyman Orchards, established in 1741, is a family destination where kids of all ages can enjoy seasonal Pick-Your-Own fruits and orchard tours. (For the record, Lyman grows 23 varieties of apples plus peaches, nectarines, pears, strawberries, raspberries and pumpkins). The Apple Barrel market is a New England staple. It brims with fresh farm produce and has an in-store bakery that produces an award-winning “Hi Top” apple pie. It also turns out the best cider donuts I’ve ever had.

The new Golf Center and Apple Nine at Lyman Orchards make perfect sense for this progressive, eighth-generation farm and golf facility. I’m guessing management has it figured that if it can grow apples, it can also grow golf.  http://lymanorchards.com/