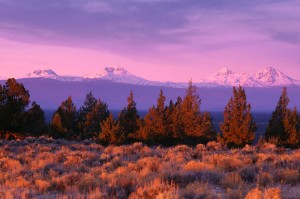 Each time I visit central Oregon, I’m taken with the crisp, clear quality of the air, fragranced, at times almost pungent with the perfume of sage and juniper.  As I teed off at Brasada Ranch on a recent June day, these familiar high desert smells were tinged with more than a hint of lavender.  I searched for hints of purple amongst the sage and fescue adorning the first tee and realized that the lavender was instead radiating from yours truly, a sweet reminder of my first ever pedicure earlier in the day.

Comfort in the Sage

Brasada Ranch is a residential/resort development in Powell Butte, Oregon, in the sage and juniper country north east of Bend.  From its inception, Brasada has cultivated an identity of sustainability; it was the first U.S. resort to obtain a Gold LEED certification.  (The resort’s initial developers – the door and window manufacturing giant Jeld-Wen – presumably had access to a good stock of high-efficiency building supplies.)  Unlike nearby Pronghorn, which began its life as a private complex and was compelled by market conditions to open its gates to public visitation, Brasada has always been partially open to the public.  45 tastefully designed cabins are available for guests, and Brasada’s two restaurants – The Range and The Ranch House – are open to visitors.  (Friends who live in the region frequent The Ranch House with some regularity, and have commented how welcome they are made to feel.)  Private dwellings (currently there are roughly 40) for community members stretch to the north toward Powell Butte (the landmark).

Brasada was acquired in November 2010 by Northview Hotel Group, which has deep expertise in fostering luxury properties.  Brasada had a great start, but most agree that under Northview’s management, the property has blossomed.  A new spa (with four treatment rooms) was opened, and The Range – Brasada’s premiere restaurant – was re-imagined by Chef Adrian Carpenter, who arrived from Little Nell’s in Aspen. 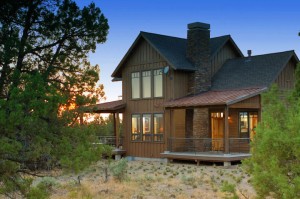 It’s impossible, however, for Northview to improve upon the views.  From its 4,000 foot elevation vantage point, Brasada’s public facilities – and most of the cabins, tees and greens, for that matter – look west to the Cascades, some 20 miles distant.  The panorama that unfolds over more than 50 miles, from Mt. Jefferson in the north to Mt. Bachelor in the south, is only enhanced by the clouds that roll in from the Pacific, but are generally unable to breach the mountains, leaving central Oregon dry…or at least much dryer than the Willamette Valley where I reside.

Greater Bend has upwards of 30 golf courses open to some level of public play.  This assemblage includes some fine tracks—Crosswater, Pronghorn (Nicklaus and Fazio courses), Aspen Lakes and Tetherow among them.  This may be enough to attract many vacationing golfers.  What really sets the region apart from other golf hubs, however, is the quality (and quantity) of its other outdoor recreational opportunities.  Road and mountain bikers will find plenty to command their attention in and around the Cascades west of Bend.  There’s world-class rock climbing just to the north at Smith Rock, a number of fine fly fishing rivers (including the Crooked, the Fall, the Metolius and the Middle Deschutes), white water rafting/kayaking, horseback riding and in the winter and spring, skiing and snowboarding at nearby Mt. Bachelor.  (Powder/Putt days are a feasible option through most of the ski season, as the course at Brasada closes due to snow only a handful of days each year.) 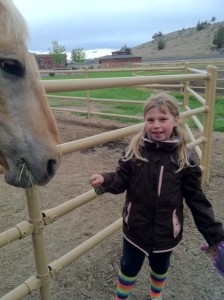 Horseback riding is one of many outdoor activities available at Brasada.

and his associates can arrange any number of activities for you, working with local guides and outfitters from the community.  During our visit, my wife and daughters opted for a horseback ride on one of the many trails around Brasada (the property was once an actual sheep ranch.)  If you’re less inclined to go off-resort, the Athletic Club has three lovely pools (two outside/one in), one of which features a “lazy river” to push swimmers along.  There’s a nicely appointed fitness center, a sand volleyball court, tennis courts and a children’s area (The Hideout) with ping pong, air hockey and big screen wii games for the rare rainy day.  We brought bikes, and my daughters Cassidy and Annabel and their palAudrey spent a good deal of time riding the trails that climb around the public section of the property.  (While I didn’t find time to fish the nearby Crooked, I did find a few largemouth bass on popping bugs on some of the stocked ponds dotting Brasada’s grounds.)

Beyond a Resort Course 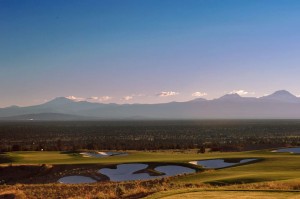 The 15th at Brasada, one of several shorter par-4s that will temp big hitters to gamble. (photo courtesy of Brasada Ranch)

Brasada Canyons is a Peter Jacobsen/Jim Hardy design that takes excellent advantage of the resort’s 1,800 acres, and its elevation changes.  Nearly every hole sits alone in its own little valley with no sign of adjoining holes; likewise, nearly every hole offers a slightly different perspective of the snowcapped Cascades to the west.  Brasada has a desert course feel, though in most cases, the barranca carries are not terribly intimidating, and the landing areas are generous…and where the fairway narrows, the sides are banked to keep the ball in play.  (If you do happen to push or pull a shot off the green stuff, balls are fairly easy to find and play back to the turf; sage seems kinder in this respect than cacti.)   When I ventured in the pro shop that I might like to walk, head pro Daniel Wendt raised his eyebrows slightly and suggested that I could always get a cart at the turn.  I soon understood what he meant; the course has nearly 800 feet in elevation change, and the distance between green and tee was frequently longer than my best drives.  I persevered (a walk that Director Zach Swoffer guestimated at eight miles) and felt like I had accomplished a feat akin to finishing a marathon.

We prepared most meals in our cabin, but one evening my wife Deidre and I left our 12 year old Cassidy in charge of the younger girls and walked down to The Range for a slightly late celebration of our 20thwedding anniversary.  It was worth the wait.  Situated in the same building that houses Brasada’s spa facilities, The Range splits seating between a high ceilinged main dining room and an ample deck; beyond the deck there are circular stone fireplaces where guests can converse and even toast marshmallows (stick and marshmallows courtesy of Brasada, of course).  Chef Adrian Carpenter – who all staff members refer to simply as “Chef”, rather than “the Chef” or “Chef Adrian” – sources as many of his ingredients as possible from the immediate area, including produce from Windflower Farms and eggs and poultry from Great American Egg.  As we sipped drinks (a Boneyard IPA for me, The Range’s orange and lemon infused take on a Margarita for Deidre) and awaited our entrees, Chef paraded a host of starters to our table.  I’m an admittedly timid eater, especially when it comes to less traveled meats.  But given Chef’s fine reputation and our server’s patient and reassuring explanations of the game that rest before us, I found myself eating (and enjoying) duck rillettes and venison sausage (smoked in-house).  The goat (braised in red wine and 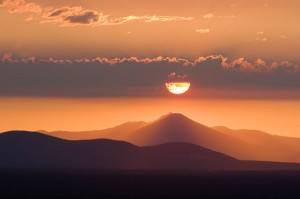 The sunsets at Brasada are as attractive as the brochures promise!

served with pappardelle pasta, porcini mushrooms, pancetta and goat cheese) proved a bit of an acquired taste for my unadventurous palate, but Chef should consider it a victory that I even tried it!  For the main meal, I opted for forest mushroom risotto (with fungi foraged by Royce the ‘Shroom Guy, I learned later), Deidre the plum & mustard glazed pork chop, served with smashed sweet potatoes, blistered asparagus, Madeira-plum jus.  Both were outstanding, though given our earlier charcuterie indulgence, we brought the lion’s share of our entrees home.

A side note:  Brasada’s promotional literature makes much of the sunsets.  Their copy is not hyperbole.  Through our leisurely 2.5 hour meal, we watched the mountains assume various shades of yellow, orange and salmon, while the sky above displayed spectrum-like bands of color – truly amazing.

There are some higher end resorts that I’ve visited where one has the sense that staff members have had their front cortex scrubbed and re-programmed so they behave in the “____(luxury brand here) way.”  This was not the case at Brasada.  Everyone we encountered – from housecleaners to servers to the Spa and Adventure Center staff – were extremely friendly and service-oriented. We enjoyed genuine conversations with everyone we met, and every staff member went out of their way to be accommodating.  (Special thanks to Heidi Miller at the Spa for braving my ungainly feet, and the story of her elk hunt.)

And that’s the kind of treatment that will bring us back.

Play/stay packages at Brasada begin at $329 per person/per day.  Visit www.brasada.com for details.