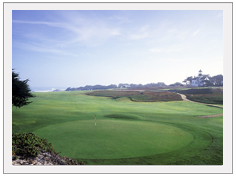 Pacific Grove may always be in the shadow of its famous neighbor to the south, but as for golf value, it's hard to beat.

The Pacific Grove Municipal Golf Links rests just a few miles north of some of the priciest golf real estate in the world.  Yet despite its glamorous locale, there is no elaborate clubhouse, no bag drop, no parking attendant—and green fees are less than lunch for two at the Tap Room at the Pebble Beach Lodge.

These are a few of the reasons that Pacific Grove Muni has a special place in Peter Finch’s heart; it has nothing to do with the fact that the course was the site of Peter’s finest round!

“I was out on the central California coast on a golf pilgrimage to Pebble Beach,” Peter recalled.  “I played Pebble, Spyglass Hill and Spanish Bay over three days.  They’re all very challenging for a guy with a middle-handicap.  Mine is in the low teens, and anyone with that skill set is going to struggle a bit.  I think people struggle at Pebble as they struggle at St. Andrews, as the setting does a job on your head.

“After the round at Spanish Bay, I felt pretty beaten up by the courses.  I also was a little discouraged.  I didn’t play very well at Spanish Bay, and the round was extremely slow, as there was a business outing in front of my group.  I ended the day disappointed with my game, and disappointed with the Pebble Beach folks for pumping so many players out there.  I didn’t know if I even wanted to play the next day.  I definitely had a bad attitude.

“When the morning came around, I thought that maybe I’d just go over and have a look at the Pacific Grove course.  I knew that the back nine had been laid out by Jack Neville, the same fellow who did Pebble Beach, and I’d heard that it was a treat.  I drove down there and walked into the Pro Shop.  The guy behind the counter was a bit gruff.  I said I wanted to play as a single and he replied, ‘You can’t.  We have a big outing going out in 15 minutes … unless you go out with the twosome that’s on the tee right now.’  I ran up to the tee to see if I could join the twosome, and when they consented, I hustled back to the parking lot, threw on my shoes and grabbed my bag. I caught up with the twosome as they were putting out on the first hole, a short par 3.”

The 18 holes at Pacific Grove are the sum total of two nine-hole layouts built nearly 30 years apart.  The front was laid out in 1932 by a former U.S. Amateur champion named Chandler Egan, the back nine in 1960 by Jack Neville of Pebble Beach fame.  The front nine is a fairly typical muni, with screens up in a few places so people on the next fairway don’t get beaned by errant shots.  The back nine, however, morphs into a fabulous links-style layout, weaving back and forth along the Pacific.  Two high points on the back are the 16th hole, a 355-yard par-4 where the tee box rests next to the photogenic Point Pinos Lighthouse, the longest continuously operating lighthouse on the West Coast; and the 17th, a153-yard par three that plays across a freshwater pond to a green fringed with Monterey Cypress, with the Pacific crashing on the left.

The twosome that Peter hooked up with had quite a positive impact on his day.  “They were two local folks, Patricia, who I suspect was somewhat affluent, and Jose, who was an older gentleman, and Patricia’s gardener.  They had a regular golf date.  She took him out to play on some of the tonier clubs in the area.  Though the front was decidedly unremarkable, Patricia, Jose and I had wonderful conversations, and I could feel my funk lifting.  I was starting to feel good about golf again.  Here, I’d stumbled across a little muni where I could run out on the spur of the moment and for $42, have a pleasant outing with real people.

“On the back nine, things changed abruptly.  It’s a completely different course, just amazing.  It takes you right out on the water and combines incredible views of the Pacific and Monterey Bay with windswept bluffs reminiscent of some of the great courses of Scotland and Ireland.  At one point Jose pointed out Johnny Miller’s house.  The sun is shining.  It was a quintessential California moment, as if we were in the middle of a Beach Boy’s video.  I knew I was playing well, but I wasn’t adding things up.  I wasn’t thinking about it too much, I was just living in the moment.

“We got to the 18th green and I said goodbye to Patricia and Jose.  I totaled my score up and realized that I hadn’t played the first hole. If I had played the first hole, it might have been my best round ever.  I went to the pro shop and asked if I could play the first hole.  The same gruff guy behind the counter said ‘No.’ I said ‘Please.  If I play the first hole, it would be my best round ever.’  He said ‘I can’t do that.  We have this outing going.’  I gave it one last try.  ‘Please.  Please let me out.’  He kind of scowled and tilted his head toward the tee.  I nearly holed the par-3; the ball lipped out, leaving me with a 4-foot putt for birdie.  I missed the putt, but I still got a par.  It was the best round of my life.

“When I went back in and thanked him, I got a little smile out of him. I came away feeling really pumped about golf again.  It stayed with me for a long while.  Pacific Grove gave me this special feeling, the feeling you get going to a nice place that’s underappreciated.  You take someone to such a place, they feel like you’ve let them in on a secret.”

Peter Finch played his first round of golf in junior high school and was immediately hooked. He is now a senior editor at Golf Digest and Golf World magazines, where he is in charge of travel coverage and special projects, positions he has held since early 2003. His editorial projects include, among other things, Golf Digest’s annual Best New Courses report and its biennial 100 Greatest Courses and 75 Best Resorts surveys. His travels as a golf writer have taken him everywhere from St. Andrews to the inside of a Phoenix cryonics lab, where the head of slugger Ted Williams is (allegedly) frozen. A graduate of Stanford University, Peter was previously the editor of SmartMoney magazine and before that an editor at BusinessWeek.

Getting There:  Pacific Grove is about two hours’ drive from the San Jose airport, which is served by most major airlines.

Course Information:  The par-70 Pacific Grove Municipal Golf Course measures a modest 5,732 yards from the back tees and has a slope rating of 119.  Green fees for visitors are $42 to $48—that’s less than ten percent of the fees at Pebble Beach, if you’re counting.  Call 831-648-3177 for more information and tee times.

Accommodations:  Pacific Grove is a pleasant town, literally and metaphorically between Carmel and Monterey.  Visitors enjoy walking the sidewalks or biking the paths that adjoin the Pacific, where sea otters can often be seen frolicking amongst the kelp beds. The Pacific Grove Chamber of Commerce (800-656-6650; www.pacificgrove.org) highlights bed & breakfasts, inns and other accommodations.

(From Fifty Places To Play Golf Before You Die.)