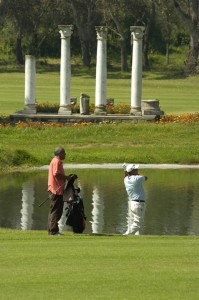 Resting at the fulcrum between Europe and northern Africa, cloaked in exotic robes long before the release of the movie Casablanca, Morocco is a colorful kingdom that has long enticed adventurous travelers.  Roughly the size of California, Morocco is a land of tremendous contrasts, a place where snowcapped mountains rise from the edges of an inhospitable desert, where millennium-old neighborhoods survive in the midst of modern cityscapes.

And thanks to King Hussan II it’s also a land of quality golf courses.  “If you want to golf and have an adventure that departs from your typical American resort experience, you’ll find Morocco appealing,” Rich Lerner said.

Golf was introduced to Morocco in the early 1900s but did not gain much momentum until the latter part of the century, when King Hussan II took the throne.  The king was a passionate player who forged a close relationship with Billy Casper, and together they did for golf in Morocco what President Eisenhower and Arnold Palmer did for the game in America . . . albeit with a slightly smaller following.  Morocco now boasts sixteen quality courses.  One of the crowning golf achievements of the king’s reign came in 1971, when Robert Trent Jones Sr. was commissioned to forge Royal Dar es Salaam from a forest of cork oak and eucalyptus trees on a hill overlooking the city.  Dar es Salaam — or “House of Peace” — hosts two 18-hole layouts and one 9-hole track in the capital city of Rabat, on the Atlantic coast.  The Red Course is the championship venue, a par 73 measuring in at a whopping 7,462 yards from the back tees; it’s considered the most challenging course in Morocco.  While the narrow fairways cry for the good judgment of a long iron off the tee, the distance demands driver—and, one hopes, lots of roll!  The Hussan II Trophy, for many years a European Tour event, attracted some top-notch players to Dar es Salaam’s Red Course.  Billy Casper won the tournament twice, as did Payne Stewart

Several holes are memorable.  The 200-yard par 3 ninth is played across a lake to an island green; flamingos are often seen high-stepping around the green.  A few holes later, the 567-yard par 5 twelfth finishes against a backdrop of Roman columns transferred here from the ancient city of Volubilis a few miles away.  After 18 holes on this demanding track, many will feel as if chariots of gladiators have been on their heels.  Yet the fragrances of mimosa, rose, hibiscus, and orange trees fill the air, and the presence of banana and papyrus plants all further the oasis feeling that the phrase “Moroccan golf course” inevitably conjures.

“If you’ve made it to Morocco, you’re probably not going to leave without making a visit to Marrakech,” Rich continued.  “It’s an extraordinary city, blending old and new in a jarring and exciting way.”  Marrakech now has three high-quality golf courses—Amelkis, La Palmeraie, and Royal Marrakech—making the thousand-year-old city Morcocco’s golf hot spot.

Royal Marrakech is one of Morocco’s oldest courses, dating back to 1923, when it was built by the pasha of Marrakech after a trip to the United Kingdom, where he came upon the game.  Rather pedestrian in its first incarnation, Royal Marrakech was redesigned ten years later by a trio of Frenchmen¾Gustave Gollias, Bouchaib Stitou, and Arnaud Massy, the winner of the 1907 British Open and the only Frenchmen to achieve this milestone.  It went on to become a favorite of the deceased king and his colleagues, and has also hosted many dignitaries (Winston Churchill and Dwight Eisenhower played a few rounds here after the Casablanca Conference of 1943.)  It’s no wonder that the course has a following.  The layout wanders among cypress, palm, olive, orange, and apricot trees and rests near the foot of the Atlas Mountains, where perpetually snow-covered Mount Toubkal soars to 13,665 feet.

Though part of Africa and the Arab world, Morocco has strong ties to Europe.  Perhaps these links help explain the nickname of the course’s signature hole.  “The par 3 fifteenth is both famous and funny,” Rich related.  “Guarding the green are two rather prominent grassy mounds, with a bunker in between.  It’s called the Brigitte Bardot hole, as the mounds, anatomically speaking, reminded someone of the actress in her youth.”

Rich found some fine golf in Morocco, and was equally inspired by the exotic surroundings.  “The sense of history here is profound, and it’s also a charming destination.  After playing golf in Marrakech, we walked through the Medina, the old walled Moorish city, a labyrinth of alleyways.  We made our way to a tannery.  It was as if we’d returned to the year two A.D.  There was a guy standing in the distance in a loincloth with some animal skins draped over the walls behind him.  At the time, I thought that the scene must be little different than it was in that spot a thousand or two thousand years ago.”

Rich Lerner has been a mainstay at the Golf Channel for the past eight years.  He can be seen hosting Golf Central and Champions Tour coverage with Brandel Chamblee, and is a contributing writer for TheGolfChannel.com.  Additionally, Rich has hosted the 2003 Solheim Cup from Sweden, the 2004 Tavistock Cup, and the 2004 UBS Cup; his essays have punctuated the network’s coverage of golf’s major championships.  His one-hour specials include New York Stories and Courage on the Fairways.  Se Ri Pak, A Champion’s Journey earned Rich the prestigious Women’s Sports Foundation Journalism Award.  Prior to joining the Golf Channel, Lerner was the host of a Prime Sports Radio Network afternoon drive time talk show distributed to approximately 110 radio stations nationwide.  Lerner’s vast experience in the broadcasting and golf industries are great assets to the network.

Getting There:  Rabat, Morocco, is served by several carriers, including Air France (800-237 2747; www.airfrance.com) and Royal Air Maroc (www.royalairmaroc.com).  Most American travelers reach Rabat via Paris.  Once in Morocco, the train and bus systems are considered reliable.  Marrakech can be reached from Rabat in a few hours.

Course Information:  Par 73 Royal Dar es Salaam (www.royalgolfdaressalam.com) measures 7,462 yards from the back tees.   .  Information about the club (and about other courses in Morocco) can be found by calling the Royal Moroccan Golf Federation at  +212 37 75 59 60.  Par 72  Royal Marrakech Golf Club is 6,475 yards.  For more information, call +212 44 44 43 41.  A casual Internet search will reveal a number of tour operators offering Moroccan golf extravaganzas.

Accommodations:  Both Rabat and Marrakech offer a wide variety of accommodations, from Western-style hotels to riads, which once were small palaces that have now been transformed into luxury inns; www.maroc-selection.com provides an overview of places to stay.  If you have any energy left after Dar es Salaam, take in the Mohammed V Mausoleum, a wonderful example of Moroccan architecture.  While in Marrakech, be sure to visit the Medina, the Koutoubia Mosque with its nearly 240-foot-tall minaret, and the Djemma el Fna public square, replete with dancers, musicians, storytellers, fortune-tellers, magicians, and snake charmers.