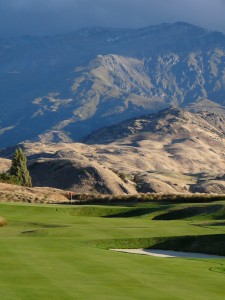 The rugged schist formations of the Remarkables Mountains and the Crown Range are ever in evidence at The Hills.

Most would agree that when it comes to golf notoriety, the North Island of New Zealand has hogged the Kiwi spotlight.  First, the North Island gave us Kauri Cliffs, near the top of the island, then Cape Kidnappers in the Hawke’s Bay region in the southeast.  Both have quickly emerged as must-visit venues for sojourning golfers, who in the past may have opted to leave the South Island for traveling trout fishermen.

Jewelry mogul Michael Hill set out to change that, and his efforts attracted the attention of the man who many consider to be the ambassador of New Zealand golf – British Open Winner Sir Bob Charles.  “Michael loves the game of golf, and owns a large property – some 500 acres – just outside Arrowtown, on the South Island,” Sir Bob described.  “He had a little pitch and putt in his back yard, with three different greens that you could play from different angles so you could take it to nine holes.  Michael wanted to put the land to good use, and eventually decided that it should hold a golf course.  He hired John Darby, a golf course architect and resort planner based in nearby Queenstown to design The Hills.  No expense was spared.  I have a cottage nearby at Millbrook (a resort community), and visit the area regularly.  After I had a chance to play, I realized the potential the course had to be a tournament venue – from a viewing aspect, it’s one of the finest layouts I’d ever seen.  The playing field is in a natural amphitheatre.  There are stadium courses like TPC Sawgrass that are built specifically to host spectators.  The spectator aspect of The Hills is purely natural.”  With Sir Bob’s encouragement, Michael Hills and John Darby added some finishing touches to The Hills; as a result, the course has hosted the New Zealand Open three years running, from 2007 to 2009.  Few courses have been home to such a prestigious event in their first year of official operation.

Peter Jackson’s Lord of the Rings trilogy showed the world what most Kiwis already knew—that the southwestern portion of the southern island of New Zealand is an area of incomparable natural beauty.  The combination of steep mountains, dark green forests, snow-capped peaks, foaming waterfalls and fingers of blue fiords make the region – known broadly as Fiordland — one of the most visually stunning temperate areas in the world.  Fiordland has long attracted hearty adventurers, most notably, trekkers; it’s home to what many consider to be the world’s most beautiful hike, the Milford Track.  Anglers regularly make the pilgrimage to the South Island to fish its clear, uncrowded streams, home to oversized brown and rainbow trout – émigrés from Europe and California, introduced by English pioneers who often brought recreational fishing and golf to the new lands they settled.  Arrowtown is just west of Fiordland, and enjoys a drier climate.  “Arrowtown got its start in the 1860s when gold was discovered in the river,” Sir Bob said.  “It’s surrounded by mountains; I can see three different ski fields from my cottage, all less than an hour away.  Between the hiking, fly-fishing, hunting, skiing and golf, it’s one of New Zealand’s premiere resort areas.”

While a majority of New Zealand’s golf courses and golfers reside on the North Island, the game has its roots in the deep south, in the province of Otago.  New Zealand’s first club was established here in the city of Dunedin in 1871 by a Scotsman named Charles Ritchie Howden; indeed, it was the first club in the southern hemisphere.  Initially called the Dunedin Golf Club, it’s now known as the Otago Golf Club, and its Balmacewen Course is one of the jewels of Kiwi golf – on either island.

The setting that makes The Hills a great spectator course also makes it a memorable playing experience.  Laid out on the site of a former deer farm, the course is encircled by the Remarkables Mountains and the Crown Range, which include peaks approaching 8,000 and 6,000 feet respectively; Guests are often treated to the play of snow-dusted peaks against the brown schist that dominates the site.  The rugged schist formations that give The Hills its dramatic topography also lend it an almost masculine characteristic, a facet of the course’s persona that reverberates in the many intrepid lines presented from the tee boxes that beg big hitters to push to their limits for scoring advantage.  The Hills’ aesthetics are softened by the presence of more than 50,000 red and silver tussock plants, which sway in a mesmerizing fashion when the breezes blow through the hills.  (They can also swallow up wayward shots.)  There’s also a sculpture garden with works created by renowned local artist Mark Hill (Michael’s son) near the award-winning modernist clubhouse, which features painting by Christine Hill (Michael’s wife).  The palette is finished off with ten ponds, all fed by Mill race (stream), which winds through the property.

“As the name suggests, The Hills is indeed quite hilly,” Sir Bob continued.  “In fact, on one hill in the middle of the course, you can see something like 13 greens from one spot.  I don’t know of any other course in the world where this can be done.  From a playing perspective, The Hills has a little bit of everything – drivable par 4s, reachable par 5s.  There’s great variety, and no two holes are alike.  Overall it has a links atmosphere; there are trees on the perimeter of the playing areas, but they don’t factor into your scoring.  The seventeenth hole (called The Canyon) is The Hills’ signature hole, a par-5 of 553 yards.  On your tee shot, the first 300 yards of the fairway on the right are guarded by a large pond and a huge waste bunker; two bunkers lurk at the left edge of the landing area. Here the hole doglegs right; your second shot plays into a schist-faced canyon, where the fairway narrows as it approaches an undulating green.”

A fitting penultimate hole for a course that will make traveling linksters put the South Island on their itinerary.

Sir Bob Charles is widely regarded as New Zealand’s greatest golfer.  During his competitive career, he won more than 60 titles worldwide, including the 1963 British Open where he beat American Phil Rodgers in a playoff.  (This made him the first lefty to ever win a major tourney.)  Known as one of the game’s best putters, he triumphed five times on the US PGA Tour and claimed eight titles on the European Tour.  He also won four New Zealand Opens and three New Zealand PGA Championships before embarking on a successful senior career that included the Senior British Open in 1989 and 1993.  Sir Bob was made a Member of the Order of the British Empire (OBE) from Queen Elizabeth in 1972 and advanced to Commander in the same Order in 1992. He became Sir Bob Charles in 1999 when made a Knight Companion of the New Zealand Order of Merit.  Sir Bob is also a successful golf course designer, having contributed to the designs at Formosa Country Club, Millbrook and the nine-hole course at Matarangi.  He was recently voted into the World Golf Hall of Fame.

Getting There:  The Hills is in Arrowtown, which is 15 minutes from the Queenstown international airport.   Air New Zealand (800-262-1234; www.airnewzealand.com) offers service to Queenstown through Air New Zealand Link via Auckland or Christchurch.

Course Information:  The Hills (+63 3 409 8290; www.thehills.co.nz) plays 7,243 yards from the tourney tees to a par 72.  While The Hills is a private club, management endeavors to accommodate visitors whenever possible.  Green fees for guests is $500 NZD; approximately $300 USD at the time of this writing.  The course at Millbrook Resort – almost across the street from The Hills – is also a popular venue.

(Photo courtesy of The Hills.)