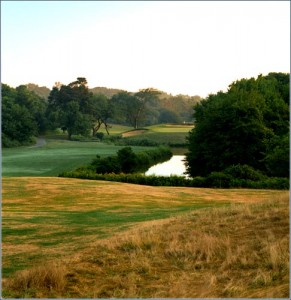 Montauk Downs is evidence that there's room for more than one first-rate muni on Long Island.

If the United States has an equivalent to the springy turflands of Fife, it is found toward the tip of Long Island, New York.  Here you come upon the sandy soil and tree-growth stunting winds that mark the eastern coast of Scotland.  And here you find the first great flowering of American golf.  Long Island was not the site of the nation’s first golf course, nor its first 18-hole layout, but it is the home of the country’s first great golf course, The National Golf Links of America — C.B. MacDonald’s paean his favorite holes from the courses he’d visited in Scotland.  Other giants followed – William Flynn’s Shinnecock Hills (on land adjoining The National, both in Southampton), Willie Park’s Maidstone (in Easthampton) and a bit further to the west, the original MacDonald design at Lido Beach.  For most of us, an outing at The National, Shinnecock or Maidstone qualifies as a once in a lifetime event – after all, entree to these courses is more guarded than the sanctums of many heads of state.

Fortunately, Long Island has also long been a sanctuary of quality PUBLIC golf.   One of the early public links was Salisbury Links, established in 1918 by Joseph J. Lannin, proprietor of the Garden City Hotel after a course of the same name went private and changed its name to Cherry Valley.  (Salisbury Links is now a 3-course complex called Eisenhower Park; Lannin had earlier established a fine course at his hotel that went private and became Garden City Golf Club.)  Anyone who follows professional golf has likely heard of Bethpage Black, one of five public courses at Bethpage State Park in Farmingdale, and a regular U.S. Open stop.   Fewer have heard of Montauk Downs – though that might change.

“My wife has some friends out in the Hamptons, and we started heading out to visit them around 2000 or 2001,” Damon Hack recalled.  “Being a golfer, I was looking for a place to play while everyone else was hanging out.  Bethpage was preparing to host the 2002 U.S. Open at the time, and there was a lot of talk about the renaissance in public golf – the Bethpage event was being called ‘The People’s Open.’  It was in this context that I first heard about Montauk Downs.  After playing there just one time, I could remember the routing very clearly.  I generally don’t recall each of my shots during a round, but when I play at Montauk, they stick with me.  The routing is that special.”

Like so many golf courses, Montauk Downs was initially created as part of larger real estate venture, commissioned by an entrepreneur named Carl Fisher.  Among his many ventures (that included the Indianapolis Speedway and the establishment of Miami Beach as a resort destination), Fisher staked out Montauk as a “Miami Beach of the North.”  He engaged Captain H.C.C. Tippet to draw up the plans; it’s well-known that Tippet was assisted by C.B. MacDonald, though MacDonald took no credit for the design.  The course, which opened in 1927, was augmented by a first-rate clubhouse designed by Stanford White; green fees were $2.50 during the week and $3.50 on weekends.  Montauk wanders through hilly, wooded terrain and around ponds and lakes; though more a parkland layout than a links, Montauk Downs is subject to the vagaries of links-like conditions.  “You get some amazing weather out on the eastern tip of Long Island,” Damon continued.  “You get days when there’s no wind, days with heavy wind, days when the wind is constantly switching around.  It makes things fun – and challenging.”

Montauk Downs initial Roaring Twenties’ glory was short-lived.  Black Tuesday ruined its owner, and over the next three decades the course slowly fell into disrepair.  By the 1960s it was a shadow of itself, and its new owner – the Bank of Israel – retained Robert Trent Jones, Sr. to re-invigorate the course.   Working with his sons (Robert, Jr. and Rees) at his side, the elder Jones conducted a significant redesign, resulting (for the most part) in the course visitors see today.  As of this writing, Montauk is in the final stages of another upgrade, overseen by Rees Jones; Jones donated his services as the budgets didn’t allow for a designer of his caliber.  His motivations for doing so:  Fond memories of working alongside his father, and a belief that the future of golf rests in public facilities. “Bethpage is in the top ten in the country, and we’re looking to have Montauk start to rival that,” Jones has said.  In this go round, work has focused on re-shaping greens and rebuilding bunker complexes.

“One of the benefits of Montauk Downs is that it is at least two and half hours from New York City,” Damon continued.  “Because of the distance, it doesn’t get the traffic that Bethpage Black gets.  I can’t say that Montauk is as grand as Bethpage Black, but it’s every bit as memorable.  The strength of its design and the variety – not to mention its difficulty – make it stand out.  I don’t love it because I can tear it up, but because it has the potential to tear me up.”

The signature hole at Montauk Downs is the par-3 12th, which plays across a ravine, often into the wind.  But Damon’s fondest memory comes from the 13th hole, a par-5 dogleg left.  “It was a gorgeous summer day in the middle of the week, not a cloud in the sky, and I was playing by myself,” he recalled.  “The 13th has an elevated tee and runs downhill; if you hit a good drive, it’s possible to go for the green in two – even if you’re just a mid-handicapper.  I caught my drive pretty good, and when I reached my ball, I felt like I could maybe make it.  I was so caught up in the moment – the beautiful day, the solitude, the good drive I’d hit – that I called my best friend in Los Angeles.  I got his voice mail, and left a message that began like this:  ‘I’m on the 13th at Montauk, I just killed a drive, and I’m debating between a 4-iron and 5-wood to go for the green.  I think I’m going to hit the 5-wood.’  I put the phone down near the ball and hit, then picked it up.  ‘Buddy, I’m left of the green,’ I said, ‘but I should still make par.’  My friend and I still talk about that phone message.  I was so elated, and wanted to share the moment with a good friend who loves the game as much as I do, and can appreciate how I love this course.”

Getting There:  Montauk is approximately 130 miles from Manhattan, at the eastern tip of Long Island – which could be anywhere from 2.5 to 5 hours’ drive, depending on traffic.  Southwest Airlines (800-I-FLY-SWA; www.southwest.com) and U.S. Airways Express (800-428-4322; www.usairways.com) offer service into Islip, roughly 30 miles out onto Long Island.