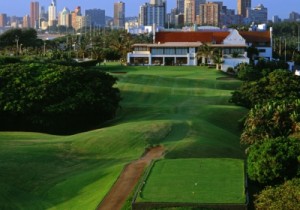 Many will be tempted to drive the short par 4 18th at Durban...and many will find disappointment in the bush.

The anxieties that have struck countless golfers approaching the first tee at Durban Country Club were struck home for Gordon Turner at the tender age of nine, before he’d even lifted a club.

“Growing up in a farming community outside of the city, it was always the greatest treat to be invited for Sunday lunch at Durban Country Club,” Gordon began. “As guests of my great Aunt, a lifelong member of this most colonial of establishments, my brother and I would be scrubbed clean & clothed in our Sunday finest (with shoes) for the trek in from the sugar plantations. Although the imposing Cape Dutch clubhouse and the beady eye of the huge Zulu doorman was in itself enough to keep us in check, the journey would always end with a stern from reminder from Dad that farm etiquette would not be accepted on Country Club property.  My clearest memory of those visits is that of sitting with my nose pressed against the bay window above the 1st tee, ignoring the adult speak at the table, trying to fathom the nervousness being exhibited by group after group of grown men as they lined up their drives.  It wasn’t long into my golfing life that I had to deal with my own demons on that opening hole.”

With the shackles of apartheid largely cast asunder, South Africa is being recognized as a must-go travel destination, thanks to breathtakingly diverse scenery, incredible wildlife viewing opportunities, a burgeoning wine industry and excellent golf in a variety of environs.  There’s Royal Cape Golf Club in the shadow of Table Mountain in Cape Town; the links course at Fancourt and Pinnacle Point, both to the east of Cape Town on the famed Garden Route; and Leopard Creek, a Gary Player design that borders Kruger National Park.  But of all the courses South Africa offers, Durban Country Club, in the Kwazulu-Natal province on the country’s northeastern coast, is considered the grande dame.  It came into being in 1922 largely from the misfortunes of Royal Durban, a course prone to flooding.  Royal Durban was the site of the 1919 South African Open, a waterlogged mess, and town fathers feared that their city would be overlooked on the national tournament circuit if amends weren’t made.  Their response was to commission Georege Waterman and Laurie Waters (a champion player of the day) to design the Country Club of Durban on a spit of dunesy land overlooking the Blue Lagoon estuary and Indian Ocean.  The course was dry enough – and challenging enough – to host the 1924 Open, and 15 more since, more than any other club.  It was here that Gary Player won his first South African Open in 1956, and nearly all the country’s golf luminaries have passed through since.  Player returned in 1990, this time to refurbish the grande dame as she approached to 70.

A few years after watching the grown-ups teeing off, Gordon had his first game at Durban – the first of hundreds of rounds.  The course still makes a grand impression.  “It’s rolling land, moving north to south,” he described.  “It’s a hard course to characterize, as it’s not exactly links, not exactly parkland.  It’s somewhat akin to the kind of terrain you find in the Melbourne Sandbelt.  The greens and fairways use a hybrid grass that was created just for the club. The green sites are generally small, flat and well-bunkered, and perched in precarious positions.  If you’re having bad round, you can find yourself reloading all day.  As far as I’m concerned, it’s tough to beat the first five holes at Durban – they’re about as good as it gets.  The tee boxes are perched high, and you hit down chutes into valleys of dunes.  It could be Royal County Downs (in Northern Ireland), except instead of fescue grasses, you have banana and palm trees.  And you don’t want to wander too far into the bush after your ball, as there are a number of poisonous snakes in this region – black mamba, green mamba and Mozambique spitting cobra.

“On the first, the tee box aims you a little right, the hole bends a little left and the green sits perched amongst the thick coastal bush that frames most holes, at the end of a narrow band of rolling fairway. It’s not a particularly long hole, just a 3-wood and a 9-iron for most, yet it’s as intimidating an opening hole as you will find, as the right side is all out of bounds and the left is bush.   With a constant sea breeze coming at or behind your right shoulder, everything screams; ‘Don’t go right!’ and before you know it you are in cobra country up the left side scrambling for par.  This opener immediately puts the golfer on edge and prepares you for the challenge ahead.  The sea view from the elevated tee on the par-3 second hole is outstanding, but the shot is demanding; anything that’s not on the green will either be in a bunker or roll down the green’s front slope.  And then there’s the fear and loathing of the 3rd hole.”

Some have called the perspective from the tee at the 512-yard par-5 3rd at Durban the most frightening view in golf.  (Architect Tom Doak has equated the vision with ‘looking down the barrel of a gun.’)  The tee is suspended sixty feet above a narrow, undulating fairway, with dense bush on the right (don’t forget the snakes!), dunes on the left, and a long, narrow bunker that juts ever so slightly into the fairway on the left side.  “When you’re up on the tee, you don’t know where to hit it,” Gordon continued.  “There’s just a little sliver of green to aim for.  It’s not really that difficult a hole, so long as you keep your drive in bounds.  If you don’t, it’s not hard to take a nine.  The opening sequence ends with par-3 into a bowl-like green, and the demanding par-4 5th.”

While the first five holes show Durban at its very best, the remaining 13 holes are remarkably good.  A few that stand out for Gordon include are 12th, the 17th and the 18th.  “From the 11th green, you walk to the top of a dune, and you’re hitting to another little dune, a little pimple of a green.  It’s not long – 158 yards.  But if you don’t hit a good shot, you can play volleyball back and forth, bunker to bunker, all day long.  It’s been called the Prince of Wales hole, as Prince Edward is said to have taken a 16 on the hole in 1924.  The par-4 17th is a bit like playing golf on the moon.  It sits low in the bush, and the fairway travels up and down a large dune, then plays up to a little green site on top of another dune.  Eighteen is one of those holes that everyone has a comment on.  It’s only 275 yards – there’s a drop-off on the right side, bush on the left, and the clubhouse right behind.  Everything encourages you to go for it – why come all this way not to try it?  You see a lot of birdies and a lot of doubles.  Many matches turn here.”

Gordon Turner grew up in Durban, cutting his golfing teeth at Royal Durban and Durban Country Club. Fortunate to play with and against Tim Clark & Rory Sabbatini as a junior, Gordon quickly realized that he would go hungry if forced to earn a living against such talents. He now owns a specialized safari travel business – Cape Scout (www.capescout.com) — based in Cape Town, and organizes South Africa golf adventures for Perry Golf (800-344-5257).  Gordon is part of the Golf Digest panel for the Top 100 courses and has been fortunate to play on many of the world’s finest layouts. He is married to Nicky, has a son Cameron & daughter Ella.