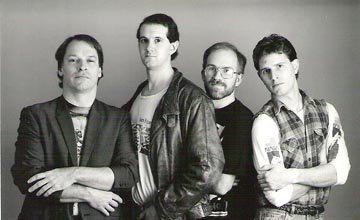 The small staff of a golf magazine is an unlikely spawning ground for a rock/blues band. But we just happened to have the right ingredients at Golf in 1989.

David (Duke) Earl, undoubtedly the only golf writer with a gold front tooth, was a passionate and talented guitarist who had made a living playing in bands before turning to golf journalism. Chris Yurko and Ken Van Kampen were pretty darn good on guitar and drums, respectively. I was a rock enthusiast who learned to play the bass to fill out the band.

In addition to playing a few gigs, we went to a studio and recorded three songs that are linked here.

Killing Floor: Our signature song. Vocals: David Earl.
Killing Floor
(There seem to be a few glitches from converting the MP3 to a url.)

Rude and Stupid: This was at the same time Jake Trout and the Flounders were doing golf lyrics superimposed on known songs. We started out doing the same thing. The song is “Birth School Work Death” by the Godfathers, with a replacement chorus of “Slow Play: Rude, Stupid.” The genesis of the title was a column in the magazine where Frank Hannigan wrote that slow play was not only rude, it was also stupid. Vocals: Chris Yurko.
Rude and Stupid

All Along the Watchtower: Based on the Hendrix version, of course. Vocals: Ken Van Kampen.
(Can’t get this file to work as a url.)

Our strangest gig was in the lobby of our Manhattan office building at lunch hour. Yes, from 12 to 1 o’clock unsuspecting workers in the 30-story building heading to or from lunch were greeted by a loud rock band, the sound bouncing off the marble walls. It was a promotion for a Times Mirror Magazines environmental initiative (encouraging recycling), and we wrote a rap song especially dedicated to the occasion. A rehearsal take is linked here.

Resource Rap: As I recall, we were given the requirement of including in the lyrics the line “doing what’s right for natural resources.” Excellent lyrics by Earl and Yurko. Vocals: Yurko.
ResourceRap 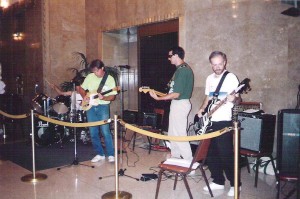 We did our practicing in the office, in a small room that served as the Golf Magazine library. And we did it loud. With Chris Yurko, there was no other way. We got a complaint once from a guy on the floor below (not a Times Mirror floor), he came up on the elevator to see who was making that racket and try to get us to stop it. Our publisher happened to be working late, and he told the guy, “It’s the company band.” We kept playing, and did not turn it down.

We played live at a pub near the office a couple of times; also at a birthday party for a Times Mirror honcho that was held in the back of a bar/restaurant. The highlight was when our colleagues at Yachting asked us to be the entertainment for two evenings of its Race Week on Block Island. It was the one time that nobody knew who we were. We weren’t those four guys who worked for Golf Magazine, we were the band that had been hired to play for a couple hundred people. And we pulled it off!

In fact, while we expected it to be a case of people all talking to each other with the band as the background noise, it turned out that most of them were actually watching and listening to us. And giving us an enthusiastic reaction. It helped that David Earl was a performer who had lots of charisma derived from pouring his heart, soul, and sweat into it.

Brutal Rough ended after about a year when David Earl took a job with USGA Journal. He died of a heart attack just a couple of years later, much too young. This is dedicated to the memory of Duke.

7 Responses to “Brutal Rough (the band)”