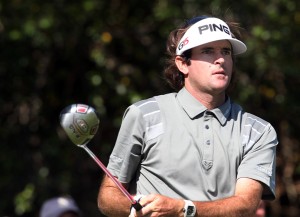 Bubba Watson has a new set of demands and pressures, in addition to opportunities, as a new major champion. Photo copyright Icon SMI.

Bubba is back. But now Bubba Watson is more than just Bubba. He’s a major champion, the top-ranked American, the refreshing new face of golf, the next big thing. As he returns to action at the Zurich Classic for the first time since winning the Masters, Watson is the center of attention, and it will be that way for a while.

The combination of a heart-on-his-sleeve personality, a sense of humor, some quirkiness, a public-course background, a homemade swing untouched by any swing coach, a unique talent that makes him both the game’s longest hitter and most creative shotmaker, and ownership of a green jacket make Watson a bona fide phenomenon. The question is, where does he go from here?

Watson faces the usual hurdles for a first-time major champion—the distractions that come with extra attention, the flood of commercial and appearance-fee opportunities that can take time and focus away from the main job of playing well on the PGA Tour, and the challenge of increased expectations.

In Bubba’s case, you can take all of that and multiply it. He’ll get more attention and more opportunities than most. The expectations referred to aren’t so much those from media and fans, but from the player himself. Many first-time major winners who have struggled—Graeme McDowell being one recent example—have said the self-imposed pressure to live up to being a major champion has been a detriment. Watson has admitted to being too hard on himself in the past when things have gone wrong on the course. With his volatile personality, he’s vulnerable to the strains of trying to back up a major title.

He’s been vulnerable when things have gone wrong off the course, too. After the bad press he received for his not-so-respectful-of-his-hosts tweets from Paris last summer, his play dropped off considerably after a great first half of the year. Perhaps a coincidence, perhaps not.

His quirky personality and interests—the campaign last year to get on Ellen DeGeneres’ show, his purchase of the Dukes of Hazzard car, his friendship with Justin Bieber—and his unfiltered thoughts in combination with a Twitter account could lead to trouble, or at least distractions, in the future.

Then again, Bubba could use the Masters as a jumping off point and continue to rise. The crowds will be behind him as never before, and the shouts of “Bubba!” along with the confidence gained at the Masters could raise him to new heights.

There are good signs in his game. The second most impressive thing about his season—behind the Masters victory—has been his consistency. In eight tournaments, Watson’s worst finish is a tie for 18th and he’s been in the top five four times. That’s a good sign from a player who had only three top-10s in 2011 even with two victories.

Watson is a volatile player who makes a lot of birdies, especially on the par fives where his scoring average this year is 4.44, and also his share of bogeys. But he could be growing into the kind of player that Fred Couples was in his prime—volatile within the tournament (that’s Bubba golf) but so talented that he’s consistent from week to week.

Watson has gotten considerably straighter off the tee in the last couple of years without reining in his awe-inspiring distance. He’s first in driving distance in 2012 at 313.1 yards, but 128th in accuracy. That’s actually much better than most long drivers, and a very good combination. The only thing that can keep Watson from reaching a par five in two is a wild drive, so keeping it in the fairway pays dividends.

The areas where Watson needs to improve if he wants to be No. 1 are his short game and putting. He’s 112th in scrambling and 165th in strokes gained-putting this year after ranking 184th and 120th in those categories last year. Two-putt birdies do a lot for your score, but one-putt birdies and scrambling pars help, too.

Winning the Masters on Augusta National’s treacherous greens was a hopeful sign. It was impressive from a mental/strategic game standpoint, too. While Augusta is known for being kind to long hitters, it can be downright cruel to the impatient and impetuous, a graveyard for players who have been overly aggressive at the wrong times or who have become flummoxed by the pressures of trying to win a major.

Watson overcame those pressures. This week he begins the task of overcoming the different kinds of pressures that come with winning a major.