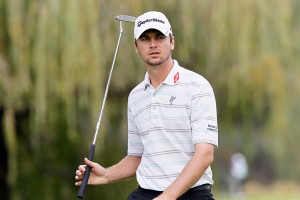 The PGA Tour’s strokes gained-putting stat shows that since 2004 only 17 players have won a tournament with a putting performance that was worse than Tour average (in other words, they actually lost strokes on the greens compared to the field).

Sean O’Hair has now done it twice. This last one, at the Canadian Open, comes with a bit of an asterisk. The stats show that he lost .076 strokes per round, which is so close to average that over the course of four rounds he lost less than half a stroke—essentially neutral. And the stats don’t reflect the fact that he made two putts from the fringe during the week; those would have bumped him into positive territory. (He also chipped in twice, which didn’t hurt his cause.)

So, it wasn’t like the 2009 Wells Fargo Championship, which O’Hair won despite losing .815 strokes per round—about three strokes for the tournament—on the greens. Still, O’Hair was able to win with mediocre putting.

What’s more, the player O’Hair defeated in a playoff, Kris Blanks, is one of the worst putters on the PGA Tour. Blanks ranked 181st in strokes gained-putting for the year entering the tournament; O’Hair was 127th. For the week, Blanks also was just a shade below average on the greens at -.055 per round.

There was a lot of talk about the course setup at Shaughnessy Golf & Country Club for the Canadian Open, which featured the deepest rough of the year. Could it be that the setup brought ball-strikers to the fore and minimized the importance of putting?

Well, we probably shouldn’t make such a grand statement based only on the two players at the top of the standings. The next four PGA Tour members on the leaderboard all putted extremely well on the week (.892 strokes gained per round or better) and three of them (Eduardo Romero, Geoff Ogilvy, and Scott Piercy) are above average putters for the year.

Naturally, good putting will help on any course. But in a setup in which driving accuracy is emphasized, it makes sense that other skills would commensurately be a bit less important than usual.

Not that driving in the fairway was the be-all and end-all at Shaughnessy. Blanks was seventh in hitting fairways, but he was one of only two of the top 12 finishers to rank in the top 10 in driving accuracy. O’Hair ranked 27th, while Romero was 44th—worse than average among players making the cut—yet only missed the playoff by one shot.

Even on a course with penal rough, what you do when you hit the ball in the fairway matters, too. If you make a lot of birdies from the fairway, you can do well. And if you make many bogeys from the fairway, driving accuracy alone won’t help you. Also, even if you drive in the rough and miss greens, great scrambling can make up for it.

Still, a look at the Tour’s Shot Tracker shows that driving in the long stuff really did cost you at Shaughnessy—the rough was as tough as advertised.

I selected 10 players from up and down the standings to see how they did from the rough in the first two rounds. I looked at results in those rounds from the primary rough on the par fours (except for the 315-yard 14th, where the second shot was very short).

Those players drove into the primary rough 70 times on those par fours in the first two rounds. They hit the green with their approach shots only 12 times out of 70, and they played those holes in 45-over par. There was only one birdie.

The 2011 median percentage on Tour for hitting greens from other than the fairway is 49.6 percent. That includes shots from the intermediate rough and from bunkers, so the percentage from the primary rough would be slightly lower—but still WAY over the 17.1 percent from the Canadian Open sample.

Those 11 par fours played to an overall average of 4.302 in the first two rounds. Since that figure includes the times played from the primary rough, when the average (according to my sample) was 4.643, it would indicate an average of about 4.15 on shots not from the primary rough (mostly from the fairway but also from intermediate rough and bunkers). That’s a cost of about a half a stroke for driving in the primary rough—or what they strive for at the U.S. Open. (Or used to. The graduated rough now employed at the Open is more generous if you are reasonably close to the fairway.) It really was old-style U.S. Open rough.

The only exaggeration lay in those who said hitting into the rough meant automatically just hacking back out into the fairway. There were shots played to the greens from the primary rough. But it’s true that there were far more zig-zag lines on the Shot Tracker hole diagrams than usual. And zig-zag lines make pars very hard to come by.