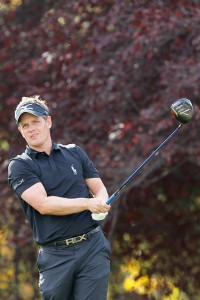 Donald made a big leap forward in 2011 because he morphed from a player who makes a lot of pars to a player who makes a lot of birdies. In 2010, Donald ranked 109th on the PGA Tour in percentage of holes where he made a birdie or eagle but still had a good season because he ranked ninth in avoiding bogeys. Donald made an extraordinary jump to fourth in percentage of subpar holes in 2011 (23.80 percent birdies or eagles) while moving up to first in bogey avoidance (12.77 percent bogeys or worse).

But how did he accomplish this? Largely by making a quantum leap on par fives. Donald’s scoring average of 4.71 on par fives in 2010 ranked 107th, but last year he averaged 4.55 to rank seventh. The top 10 in this stat is usually the province of long-ball knockers, but this year the slightly-built Donald was one of two shorter hitters to sneak in, joining Steve Stricker.

He was able to do that thanks to improved driving. Donald was one of the worst drivers on the Tour in 2010, with rankings of 177th in driving distance and 120th in hitting fairways. He was able to boost that to 147th in distance and 57th in accuracy. That still left him 127th in total driving—a combination of the distance and accuracy stats—but that’s a lot better than the 186th of the year before.

As a result of gaining seven yards off the tee (277.0 to 284.1) and being in the fairway more often, Donald was able to go for more par fives in two shots. After ranking 179th in percentage of times going for a reachable par five in two in 2010, he moved up to 125th in 2011 (a “reachable” par five defined as one where any player in the field went for it).

That enabled him to make more easy birdies. But for a shorter-than-average hitter to do so well on par fives, great wedge play has to be part of the equation. After mediocre performances on approach shots in 2010, Donald was outstanding last year, especially in the range of 100 to 125 yards. On shots from that distance, he was first in proximity to the hole, first in greens in regulation, and first in scoring relative to par.

Donald ended up with birdie or eagle (mostly birdie, since he made only three eagles all year) on 52.71 percent of the par fives after breaking par on only 39.07 percent of them a year earlier.

The area of his game Donald didn’t need to improve was putting. The Englishman led the Tour in strokes gained putting in 2009 and 2010, and he repeated in 2011. But while he was only a slightly above average from tee to green the previous two years, he was well above average last year.

Donald led the Tour by beating the field scoring average by 2.17 strokes per round in 2010. The strokes gained putting stat shows that he putted .84 strokes better than average, so he gained 1.33 strokes with the other aspects of his game from tee to green. In 2009, putting accounted for .93 of the 1.10 strokes he gained on the field (the rest of his game accounting for a gain of only .17 strokes) and in 2010 putting accounted for .87 of a total of 1.30 strokes per round better than the field (.43 for the rest of his game).

While Donald is quite good at making putts, he’s really impressive at avoiding three-putts. He three-putted only 1.24 percent of the time in 2011, the best rate on the PGA Tour. Even from longer than 25 feet, he three-putted only 4.74 percent of the time (nine times out of 190), much better than the second-best player at 5.49 percent. And his streak of 483 consecutive holes without a three-putt was nearly twice as long as the next best streak (245).

He’s also good at scrambling, ranking eighth in saving par when missing the green. That, along with the lack of three-putts, enabled him to make the fewest bogeys on Tour despite ranking only 41st in greens in regulation (which, incidentally, was vastly better than the 152nd of the year before).

It will be tough for Donald to improve on a year when his adjusted scoring average was four-tenths of a stroke better than anyone else on Tour. His strength training already having paid off, he’s unlikely to be able to increase his driving distance more than marginally. Probably the only area he could do better would be to become a super accurate driver, which in turn would help him hit more greens. In some areas, there’s no way to go but down—how long can he remain the No. 1 putter?

But there are ways for Donald to have a better year in 2012. Most importantly, with better performances in the major championships, where his showings in the U.S. and British Opens were particular disappointments in 2011. Even with a slight downtick in his overall play, a major championship would make 2012 a big year for Donald.

The big question is if Donald can continue to be a birdie machine in 2012 or if he will drift back toward being a steady but unspectacular player. Donald’s pre-2011 career was marked by plenty of top-10 finishes but not many victories. His new-found ability to make a lot of birdies helped him to four wins in 2011.

For much of the year, and from a U.S. perspective, it didn’t seem like Donald was shedding the tag of a player who doesn’t win as much as he should. Two of his victories were in Europe. He entered the final event of the PGA Tour season, at Disney, with 13 top-10s on the PGA Tour and a lone victory at the Accenture Match Play Championship. (It wasn’t a cheap match play win—he clearly played better than anyone else over the course of the week—but he was still looking for a U.S. stroke-play victory.)

Then he won the PGA Tour finale by reeling off six straight birdies on the back nine during the final round, convincingly locking up Player of the Year honors. Is that the new Luke Donald? We’ll find out in 2012.

2011 was a lost season for Woods. He got off to a disappointing start to the year, looked to be making a breakthrough at the Masters only to fail to deliver on the back nine, suffering an injury during the week that would keep him on the sidelines for most of the campaign.

November/December performances at the Australian Open, Presidents Cup, and Chevron World Challenge (a victory in his own unofficial event) bode well for a return to some kind of good form in 2012, whether it’s merely becoming a winner again or regaining his old dominance. At the end of the year, Woods pronounced himself fit again, with knee and Achilles problems finally healed.

Some question marks remain: At age 36, will he remain fully healthy or will those physical issues pop up again? With so much inactivity over the last four years has too much rust accumulated to expect him to ever be the same player? After two years, and still counting, without an official win, will he regain the confidence and swagger he had when he seemed invincible?

Regarding his game, statistics from his curtailed 2011 season show where Woods needs the most improvement—driving the ball and scrambling.

It’s a very small sample size, since Woods played in only seven measured events, but Woods’s driving distance of 293.7 yards would have ranked only 71st if he had enough rounds to qualify. That will undoubtedly improve if his knee is truly fine and he becomes comfortable with his swing changes. Still, he’s likely to remain a notch behind the PGA Tour’s power quartet of J.B. Holmes, Bubba Watson, Robert Garrigus, and Gary Woodland and won’t quite be able to overwhelm courses as he did in his prime.

Perhaps of more concern, Woods didn’t even manage to hit 50 percent of the fairways in 2011 and would have ranked 186th (last) in that category. He’s got to do better than that.

We can see the effect of poor driving in the fact that Woods averaged 4.07 on par fours, which would have ranked 132nd. He was better on par fives at 4.59 for a rank of 30th, but that’s still not what a player like Woods needs on those most vulnerable holes.

His wedge game needs work, though. He wasn’t so good from between 50 and 125 yards, and his scrambling numbers have fallen off the cliff in 2010-11. Once renowned for having one of the finest short games in golf, Woods has been having trouble saving par when missing the green—his scrambling rank would have been 166th and 141st the last two years. That’s partly attributable to often leaving himself in such bad spots off the tee that he doesn’t end up in position for easy up and downs, and partly attributable to putting troubles. But it also means his touch around the greens hasn’t been what it once was.

Woods’s putting did move back into positive territory in 2011, gaining .258 strokes per round on the greens after losing .033 strokes per round in 2010. The caveat is that his 2011 figure is based on only five tournaments and would have been worse if the Masters were included (putt distances aren’t lasered at the majors), since he struggled on the greens at Augusta. So, really, his putting is a question mark rather than a strength or a weakness right now.