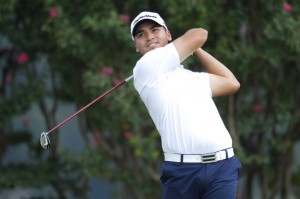 Some observations on Saturday’s third round:

It seems odd to me that on the CBS telecast of the Masters they seldom say anything about the course setup. Of course, I understand why they don’t criticize the setup. The network is, after all, on a series of one-year contracts with Augusta National. But not only do the announcers not opinionate, they seldom inform about the setup, either.

For example, yesterday I noticed that the tees were moved up on a number of holes, but not a word was said about it. The 18th tee was way up, enabling some players to hit around the corner and hit wedge into the green. Another was the 15th, which was playing shorter than its listed 530 yards—how many yards shorter, we don’t know. It really affected the way the holes were playing, so it seems like it should have been worth a mention.

The 15th tee placement ensured that nearly everybody in the field would have an iron for their second shot, and long hitters would have a shortish mid-iron. The only one of the leaders far enough back in the fairway to even have a decision on whether to go for it was K.J. Choi, who decided to lay up. Other than that, the only complications were tree trouble—Tiger Woods had a choice between a punch-out layup or hitting a big hook around trees, choosing the latter.

While I’m on the side of making birdies readily attainable on the par fives, there should be an element of risk involved on the second shot. There was no risk for most players on Saturday. That was especially true since the bank leading back down from the green to the pond in front was not shaved. The pond was almost not in play. Jason Day hit a relatively poor iron shot, but the longer grass kept it from rolling back into the water and he made a birdie. Granted, it wasn’t an easy birdie, since he faced an awkward stance on his pitch shot and had to make a 15-foot putt, but it was still a birdie after a poorly-struck approach.

The 15th offers the most strategy when players are standing in the fairway somewhere in the go/no-go zone, deciding whether to make the bold play and shoot for the green with a wood or lay up. And it’s still a very good test of execution when, after a slightly longer drive, a player has to hit a long iron—the clubs a player is most likely to mis-hit—over the pond. But when it’s a drive and a mid-iron, it loses some of its appeal.

I do like the course setup overall, though, especially that the greens have been kept receptive enough to let the players hold approach shots. That’s what allows the players to make enough birdies to keep the tournament exciting.

The most impressive stat for Rory McIlroy in the first three rounds is that he has made only three bogeys—none in the first round, one in the second, and two in the third. Can he continue to avoid the minefield for a fourth day? Usually at a major championship it’s tough to keep the bogeys down over the course of 72 holes, so that’s a concern going into the fourth round. Perhaps playing safe with a four-stroke lead will keep the bogeys away. Then again, sometimes playing safe too early gets a player out of his rhythm and the bogeys come anyway. McIlroy will be better off mixing at least some aggression with his caution until (and if) he reaches the closing holes with a comfortable lead.