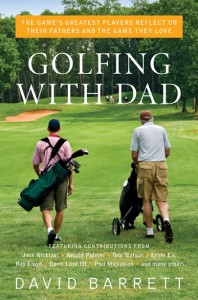 Golfing With Dad has been published by Skyhorse Publishing.

My recently published book Golfing With Dad offers insights into the father-son or father-daughter relationships of 14 PGA, LPGA, or Champions Tour pros, while relaying some anecdotes of interest. Here are some highlights (first of two parts):

Brad Adamonis: In the fall of 2005, Brad’s father Dave almost died from complications from prostate cancer surgery—and then found out he had two other forms of cancer, too. After spending the first part of 2006 undergoing chemotherapy and radiation treatments, Dave made it to Scranton, Pennsylvania for a Nationwide Tour event where he walked the entire course watching his son. “To see him walking 18 holes after all he had been through was pretty amazing,” Brad says. “I figured if he could do that, I could win the tournament.” Brad nearly did, missing a playoff by one stroke. Dave held on in his battle against cancer long enough to see Brad finally play on the PGA Tour as a 35-year-old rookie in 2008.

Stewart Cink: Stewart’s father Rob was as encouraging as he could be about his son’s game as he was growing up. “Even shots I hit that were pretty poor, he would find a way to praise them,” says Stewart. Rob’s attitude about his own game was another matter. “He’s the most negative person about himself on the golf course I’ve ever seen,” says Stewart. “Yet he was equally positive about the people he was playing with. He would seem miserable all the way around the course. Then at the end of the round, he would say, ‘That’s one of the best days I’ve ever had on the golf course.’”

Ray Floyd: When he was 17 years old, Ray was offered a $25,000 contract to sign with the Cleveland Indians and play in their farm system, even though he had skipped his senior year of high school baseball to concentrate on golf. Since he was still a minor, he would have needed his father, L.B., to cosign the contract. “I told him, ‘I really want to be a pro golfer, but that’s a lot of money. Maybe I could try baseball for a couple of years and see if it works out,’” Ray remembers. “Dad said, ‘That’s not right. If golf is what you really want to do, you would be cheating yourself and you would be cheating that man across the table if you sign this contract.’ It was a lesson in integrity that I will always remember.”

Bill Haas: It was a tough task for Bill to beat his father on the golf course, since dad Jay was a PGA Tour player, but he did manage it once in his senior year of high school. “We weren’t really keeping score on the scorecard,” Bill recalls, “but when we got to the 17th tee, he said, ‘Bill, you’re beating me by two shots.’ I said, ‘I know.’” Bill parred the last two holes to win by either one or two shots with a 69, as he remembers. “I told him it didn’t really count. When it happened, I wanted it to be where I shot 64 and he shot 65 or something like that. But he said, ‘It counts. I was trying on every shot.’”

J.J. Henry: Growing up, J.J. often caddied for his father, Ron, in the Connecticut State Amateur and other tournaments. Later, J.J. won the Connecticut State Amateur with his father on the bag. Ron also caddied for J.J. at Q School in 1998. J.J. earned a Nationwide Tour card, which he used a stepping stone for reaching the PGA Tour. “I was right out of college, so it didn’t seem like life or death at that point,” J.J. says. “Q-School can be an ordeal, but I just thought it was cool. To be able to spend three weeks with my dad, enjoying a game that we had enjoyed since I was young and we were hitting balls back and forth on the beach was probably one of the best experiences I’ve ever had in my life.”

Peter Jacobsen: Erling Jacobsen seldom watched his children play in junior or amateur tournaments because he got too nervous. He made an exception at the state high school championship, but watched Peter for only one hole. “I made a bogey, he turned around, went back to the car, and told himself he was a jinx,” remembers Peter, who didn’t know at the time that his dad had come to watch. “He didn’t tell me about it until four years later.”

Christina Kim: When Christina was playing junior golf, her father, Man, followed her around with a video camera. “Dad used to run through the trees like a yeti with a tripod. He would be out there with a backpack with extra batteries and extra tapes to make sure he got every shot,” Christina says. The purpose of the tapes was partly to capture memories and partly to allow her to look at how she was playing and see what she needed to work on. “After every tournament, I would be forced to watch myself on television,” she says. “That’s probably one reason I refuse to watch myself on television now.”