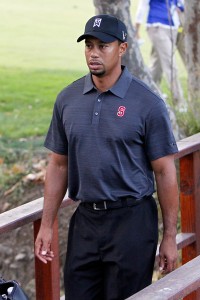 Is Tiger Woods on a bridge to recovery or to nowhere? Credit Icon SMI

Another tournament, another lackluster performance from Tiger Woods.

Woods was bounced from the WGC-Accenture Match Play in the first round by Denmark’s Thomas Bjorn, who perfectly summed up the match with this quote: “You never knew who was going to hit a bad shot next.”

In the end, it was Woods who hit the last bad shot, a drive into the desert on the first extra hole that sent him toward a losing double bogey. Another image that those who watched the first round will remember is Woods’ tee shot on the par-three 3rd hole, which splashed into a pond some 20 yards to the right of dry land.

As usual, we saw some flashes of form, most notably a birdie on the 18th hole that forced overtime. But we also saw a Woods who let a chance at victory get away from him, just as he did with a poor weekend at Torrey Pines and a bad Sunday at Dubai in his two previous 2010 appearances. That used to be a rare occurrence, now it’s happening with regularity.

I’m not here to weigh in on whether Tiger will regain his dominance, claw back to something less than that, or whether he’s lost it altogether. Frankly, I have no idea. And anyway, it doesn’t really matter what I, or anyone else, thinks. Why can’t we just wait and see what happens? It will continue to be fascinating to watch.

I do have some thoughts on how Woods got to this point. I think it has a lot to do with the three months spent in seclusion and then rehab following his traffic accident of Thanksgiving 2009 and the ensuing scandal. OK, it doesn’t take Sherlock Holmes to pinpoint that time of his life as the turning point. But the key thing I want to focus on that is that he went about three months without hitting a golf ball. During that time, his game left him.

My reference point is Paul Azinger, who at the age of 33 owned 11 victories and had just captured a major championship when he found out he had cancer in his shoulder. Chemotherapy and radiation treatments sapped his strength, taking him away from the practice tee for months and forcing an eight-month absence from tournament play.

When he returned, his shoulder was perfectly fine. There was no physical reason for him to have lost his game. But the prolonged absence did it. After his return, Azinger won only once in the rest of his career. He never found the form he had before. As a result, he couldn’t find the confidence he had before, either.

It’s true that Woods survived a similar absence after 2008 knee surgery, which caused him to not be able to hit balls for a few months and be away from the Tour for eight months. He recovered to win six times in 2009, but it can be argued that he wasn’t quite the same, since he didn’t win a major and frittered away a third-round lead for the first time ever in a major.

Perhaps the second prolonged absence from hitting balls was a double whammy, coming just at a time when he needed to work on his game just to maintain what he had. Anyway, his swing disappeared—not to mention his short-game touch, which was severely lacking in 2010 after his return.

Obviously, Woods’ psyche was not in the best place when he started playing golf again. Having his personal life in a shambles and his public image taking a huge hit undoubtedly hindered his quest to regain his game.

In terms of his swing, Woods was at a crossroads. He worked some with teacher Hank Haney in preparation for his comeback at the Masters, but the swing he had in his good days with Haney wasn’t there. He finished fourth in Augusta, but it certainly wasn’t due to consistent ball-striking.

The question was, should he work with Haney to find the swing that had abandoned him, find another teacher to work on a new method with, or go it alone. What may be overlooked is that Woods was so lost at this point that going back to Haney wouldn’t necessarily have gotten him any closer to a solution.

After a terrible performance at Quail Hollow in his first post-Masters appearance, Woods decided to jettison Haney and go on his own. In a way, this made sense. After all, a player of Woods’ talent and experience should have enough knowledge of his own golf swing to be able to figure things out on his own. But this was an unsettled Woods. And his game remained unsettled through the summer, showing signs of life at the U.S. Open but then regressing to a second terrible performance at the WGC-Bridgestone.

At that point, Woods pulled the trigger on going to a new teacher in Sean Foley. It paid some immediate dividends, as the Woods began to get back on the right track with respectable showings at the PGA Championship and Ryder Cup.

Of course, respectable showings are not what we expected from the Woods of old. But at least he was headed in the right direction. And given that he’s always had a hands-on teacher in the past, perhaps it’s right that he has retained someone in that role.

Should he have undertaken a big rebuilding job by making such extensive changes? Well, his swing did need rebuilding one way or another from the way it was in the spring of 2010. And he has rebuilt his swing twice before, regaining his No. 1 status both times. (The first time he rebuilt it, in 1998, he did so while keeping the same teacher, Butch Harmon. The second time was in 2004 when he switched from Harmon to Haney.)

But past results are no guarantee of future success, even for Tiger Woods. Just because he’s done it twice before doesn’t mean he will do it a third time.

Currently, Woods is in the middle of the “process” of a swing change, which means a period of uncertainty. The swing isn’t grooved yet, he hasn’t fully rid himself of old habits, the new method is not completely reliable under pressure, and he is thinking too much about what he’s doing instead of just doing it. Since Woods has been through this before, he surely believes that he will once again emerge on the other side as good as ever.

But there are more question marks now than there ever were before. Woods is 35 years old, with knee, Achilles, and neck problems that have hindered him in the last couple of years. He has never gone winless this long (15 months), nor has he ever turned in such awful performances as we saw from him at times in 2010. I’m sure his confidence has never been lower than it was last year, and I’m not sure how much it has recovered. His personal life still can’t be very settled. This is the backdrop on which the swing-change process is being carried out.

On the other hand, he is Tiger Woods. Is that enough anymore? We’ll find out.