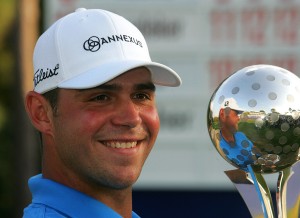 Gary Woodland scored his first win at the Transitions Championship, and it's unlikely to be his last. Copyright Icon SMI.

The Transitions Championship was won by little-known Gary Woodland. But this might be a case where the winner was little known only because he hasn’t been around very long. I have a feeling we might end up getting to know Gary Woodland very well.

He wasn’t a complete unknown heading into the Transitions. The 26-year-old Woodland made a bit of a splash with a playoff loss to another exciting newcomer, Jhonnatan Vegas, at the Bob Hope Classic in January, and he’d added two more top-10 finishes since then. Insiders knew him as a long hitter in the Bubba Watson-J.B. Holmes-Dustin Johnson-Robert Garrigus class—and also as a player who got a late start in serious competitive golf after spending a year playing Division II NCAA basketball.

The 6-foot-1 Woodland did that at Washburn State in his hometown of Topeka, Kansas, before realizing that he’d never have a future in the NBA but he might on the PGA Tour. At that point, he transferred to Kansas University, the only Division I school that had recruited him coming out of high school.

“I kind of took that negatively,” Woodland said of the lack of other golf offers. “I thought maybe I’m not that good.” But when Woodland told Kansas golf coach Ross Randall he would play basketball instead, Randall told him, “You’re going to change your mind, you have a future in this game.”

The Kansas coach was a good judge of talent. Woodland won four collegiate events in three years at Kansas and a year-and-a-half later made it through Q-School. It might have been a little too early in his development. Woodland made only 11 of 26 cuts in a rookie season that was spread over 2009 and 2010 because of a torn labrum in his right shoulder that led to surgery and a medical extension. He lost his card and had to regain it at last winter’s Q-School.

Woodland learned that “I can’t come out here and hit the ball 900 yards and win,” he said after his victory. “I’m learning you can’t fire at every pin and hit driver on every hole. I did that in ’09 and it didn’t work out very well.”

That was reinforced last Sunday when his teacher, Randy Smith of Dallas (who also teaches Justin Leonard) told him that the players who win at Innisbrook—site of the Transitions—are generally conservative. So, Woodland hit only four or five drivers a round, hitting a lot of 2-irons off the tee for accuracy, and it paid off.

What really paid off was putting. At the Bob Hope, Woodland felt that putting cost him the title. At the Transitions, he won it with a final-round putting display of which Brad Faxon would have been proud. In fact, Faxon was proud of it, because he has helped Woodland with his putting.

Woodland did not miss a putt from inside 20 feet on Sunday. And he won it by holing a 16-footer for a birdie and an 11-footer for a par on the last two holes, emerging with a one-stroke victory when Webb Simpson bogeyed the 18th.

That’s three-and-a-half strokes better than the Tour average from the distances he putted from. It doesn’t get much better than that. It was a good thing, because Woodland’s ball-striking was a little bit shaky in a round that included seven birdies and three bogeys and only a single par on the back nine—that on the 18th.

Oddly, Woodland normally doesn’t putt anything close to that well. Even after his Transitions performance, he ranks only 97th in the Tour’s total putting stat. He ranks 8th in driving distance (299.5 yards) and 15th in greens in regulation.

When he came onto the Tour, Woodland figured that with an athletic background that included playing for two state high school basketball championship teams handling the nerves if he got into contention wouldn’t be a big problem.

At third on the money list in 2011, it looks like he’s learning pretty well. But be forewarned, Woodland feels he still has a lot to learn. The fact that he’s gone to Faxon for putting advice, picks Leonard’s brain “as much as I can,” and says that he learns just from playing with top players shows that the Kansan is serious about soaking up as much knowledge as he can.

“We’re just tip of the iceberg right now. I’m not anywhere near where I want to be,” he said.