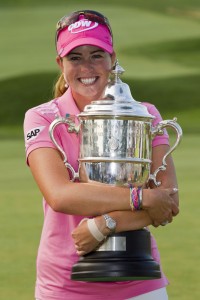 The question of whether the women could handle a severe course like Oakmont for the U.S. Women’s Open was answered in the affirmative (as, for that matter, it was in 1992).

Of course, the answer depends to a large degree on course set-up. If you move the tees up, keep the rough shorter, and slow down the greens, all by just the right amount, you can make the course an equal test for the different power and skill levels of the best men and women golfers. It’s a subjective matter, but it seemed the USGA got it about right.

Weather is also a factor, particularly moisture. There’s no question that the heavy rains of Friday afternoon (on top of more-than-usual rain in the weeks leading up to the championship) softened up the course just enough that it wasn’t as treacherous as it might have been—or as treacherous as it was for the 2007 U.S. Open.

Still, the greens in regulation statistics reflect very well on the LPGA players’ ball-striking ability. Particularly impressive was Norway’s Suzann Pettersen, who hit 14 greens in the first round, 16 in the second, 14 in the third, and 15 in the fourth. At Oakmont! That’s a total of 59 out of 72 greens for the week, five better than anyone else.

Na Yeon Choi, who tied with Pettersen for second in the tournament, hit 13, 14, 13, and 14 greens for a total of 54, a total matched by Sukura Yokomine. Four players hit 53 greens and winner Paula Creamer was one of five players hitting 52 greens.

In the 2007 U.S. Open, Tiger Woods led the field with 49 greens in regulation and winner Angel Cabrera had 47. It should be noted that not only were the greens firmer, but the men played the ninth hole as a long par four, making it a difficult green to hit in regulation, while the women played it as a short par five, relatively easy to hit in three.

The effect of Friday’s rain is shown by the fact that only five players hit 14 or more greens in the first round, whereas at least 11 players did in each of the last three rounds under softer conditions. Still, the GIR numbers are pretty impressive.

The one aspect of the game where LPGA pros are statistically superior to their male counterparts—on any course—is driving accuracy. (It helps that geometry dictates a ball traveling a shorter distance won’t fly as much off-line.) That showed up at Oakmont, where Jiyai Shin led in hitting fairways with 44 of 56 and Creamer tied for third with 42. In 2007, Fred Funk led by hitting 41 fairways and nobody else hit more than 38. Approaching Oakmont’s greens from the fairways is a recipe for hitting more greens, too.

The women did struggle a bit on Oakmont’s super slick greens, which are unlike anything they face elsewhere. Higher greens in regulation numbers naturally translate into more putts per round, because of fewer up-and-down opportunities, but even taking that into account the putt numbers seem pretty high. Only two players, Brittany Lang and Amy Yang with 119 putts for the championship, managed less than 30 putts per round.

On the high end, 23 players averaged at least 33 putts per round—that’s a lot of putts for the pros. Pettersen averaged 34 putts per round and Brittany Lincicome had a staggering 41 putts in the second round. Both have won major championships. Creamer claimed victory by combining her T8 in greens in regulation with a ranking of T3 in putts per round with 121.

Overall, scoring was about what you would expect for a U.S. Open or Women’s Open. Creamer’s 3-under 281 was the only under-par total. There was only one score below 70—an opening 69 by Lang—until the final round when, suddenly, there were 10, including a 65 by Song-Hee Kim and a 66 by Choi that featured a 31 on the front nine.

The course didn’t get any softer from Saturday to Sunday, and most of the final-round hole locations were similar to those in the 2007 U.S. Open, so they can’t have been too easy. Anecdotal evidence suggested that the greens might have been a touch slower in the final round. Also, the tees were moved up on both of the short par fours, the second and 17th, making both of them driveable.

The 17th was almost a glorified par three at 229 yards to the hole. However, it should be noted that it is significantly uphill (some of the shorter hitters didn’t quite reach the green with drivers, though the longer hitters were getting pin-high with 3-woods), and also blind from the tee. If you were to design a par three like that, people would scream bloody murder. But as a par four it becomes a legitimate and even a fun hole because you’re not requiring a player to hit the green with the tee shot but rewarding them for an extraordinary effort if they manage to bounce one through the opening and onto the putting surface.

In the big picture of women’s golf, the Women’s Open reintroduced Creamer as a player with the potential of becoming No. 1, joining a crowd that includes Cristie Kerr, Jiyai Shin, and Ai Miyazato (all of whom have spent time in that spot this year), Yani Tseng, Suzann Pettersen (if she starts turning some of her runner-up finishes into wins), and Michelle Wie. (Yes, Wie is on this list based on her extraordinary play at ages 14 to 16 when her major-championship record was one of the best in the game, and a good, though not spectacular, record since joining the Tour full-time in 2009. Her performance at Oakmont was certainly disappointing, though.)

One question about Creamer is whether she hits the ball long enough to become a dominant player. She ranks 132nd at 235.4 yards per drive, though it’s possible that when her surgically-repaired thumb fully heals she could step that up a little. (By the way, how annoying was it that NBC announcer Dan Hicks continually kept saying she was coming off wrist surgery. It was the biggest story line of the week, and he couldn’t get it right.)

The past two LPGA dominators, Annika Sorenstam and Lorena Ochoa, were both among the longest hitters on Tour (Ochoa surprisingly so, with her slight build). So are Tiger Woods and Phil Mickelson on the PGA Tour, along with the other player besides Woods to make it to No. 1 in the past decade, Vijay Singh.

I believe it would be difficult for a player of less-than-average length to become an eight-win-a-year player in the Sorenstam-Ochoa mold. But we could be headed for an era where the wealth is spread more equally, and in those circumstances Creamer could be a No. 1 who isn’t separated from her rivals by quite as much.

There is a refreshing variety in the type of players who are currently vying for the top spot on the LPGA Tour. Shin and Miyazato are in the Creamer mold—shorter than average but straight. Wie is very long, ranking second on Tour at 270.9 yards, a full 35 yards ahead of Creamer. She’s pretty wild (130th in accuracy), but that doesn’t seem to be hurting her much as she is fourth in greens in regulation. Her biggest problem at the moment seems to be putting (ranking 103rd).

Tseng is also very long, ranking fifth at 263.6 yards, and not all that straight. The two best drivers for distance and accuracy combined are Kerr (21st in distance, 38th in accuracy) and Pettersen (10th and 51st), with Pettersen leading the Tour in greens in regulation at 75.5 percent.

Pettersen is my darkhorse choice as a player who could be No. 1 soon. Anyone who can average hitting nearly 15 greens a round at Oakmont can really play the game. But anyone who can play Oakmont in 3-under for 72 holes, as Creamer did, can really play the game, too. As a showcase for the LPGA Tour, the U.S. Women’s Open at Oakmont turned out just fine.