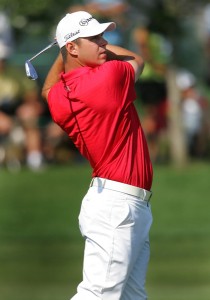 Gary Woodland played the last six holes in 6-under on Thursday, showing what can happen when a player gets hot at Augusta. Copyright Icon SMI.

One of the things that makes the Masters so compelling is the volatility of scoring. The nature of Augusta National, especially when the weather and the course setup are not too severe, is that it allows players to go on hot streaks when they get on a roll. But the course also can take its toll with bogeys and doubles when they either get too greedy or hit a poor shot.

Woodland was 3-over for the first 12 holes before his mad dash to the clubhouse gave him a 69. Vegas had just about the most eventful even-par 72 you could imagine: an eagle, five birdies, six pars, five bogeys, and a double bogey. He played the 13th through 15th holes in 4-under with an eagle on 15.

Most of the hot streaks came on the back nine, usually fueled by the reachable par-5 13th and 15th holes. The volatility of that nine is showed by the fact that the back is on average a little bit harder than the front nine (36.5 on the back, 36.2 on the front). In fact, there are more of everything on the back than the front except for pars—more eagles, birdies, bogeys, double bogeys, and others.

The one player to tear up the front nine was Retief Goosen, who holed his approach for an eagle on the par-4 first hole and shot a 31 on the opening nine. He stumbled coming up with a 39 that included bogeys on the last three holes.

Even Champions Tour player Larry Mize, the 1987 champion, put together four straight birdies on 12 through 15, and then finished with two straight bogeys for a 73. Mize made six birdies in all, while Anthony Kim and Kevin Na both had five birdies while also shooting 73. Na had a 10-hole stretch where he made only one par (four birdies, five bogeys).

That’s the trick for players at Augusta National. You’ve got to be aggressive enough to make birdies and eagles to get into red figures. But you’ve also got to know when to be careful, or else you’ve got to be on top of your game so that you avoid hitting the bad shots that can put you in bogey position and wipe out the gains you’ve made. McIlroy surged into the first-round lead by making seven birdies, but just as important was that he was the only player in the field without a bogey.

Read all of our great stories by TheAPosition.com writers as we cover the Masters.