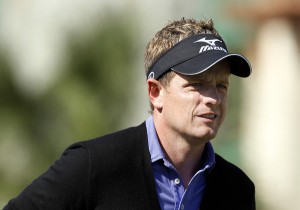 Usually, the focus of the Children’s Miracle Network Classic at Disney World is on the players around 125th on the money list. That’s especially been true since the FedExCup began five years ago and turned the Fall Series into an afterthought, usually devoid of the PGA Tour’s top players.

Thank you, Luke Donald and Webb Simpson, for turning the attention to the 1-2 spots on the money list in the 2011 season’s final event. And not only that, but living up to that 1-2 ranking by staging a riveting duel for the money title and likely Player of the Year honors. Topping it off was Donald, who might as well be known as The Man Who Doesn’t Win Enough, staging a back-nine charge with six straight birdies to win the tournament and stake a nearly undeniable claim as POY.

Simpson’s the one who started the year-end intrigue by stating his intention to make a bid for the money title by entering the last two tournaments. Slightly behind Donald in earnings at the time, he took a big lead in the money race with a second-place finish at last week’s McGladrey Classic. That enticed Donald, shooting for the money titles on both the U.S. and European tours, to add Disney to his schedule at the last minute.

Only a victory would do for Donald to take the money title—and that’s what he got. This from a man with only three career victories in the U.S. against 12 runner-up finishes and only one victory so far this year (the WGC-Accenture Match Play) among 13 top-10s coming in. Trailing by five strokes entering the round, and still down by four with nine holes remaining, Donald birdied 10, 11, 12, 13, 14, and 15.

Making the duel even better, Donald and Simpson played together all 72 holes—courtesy of the PGA Tour’s feature pairing in the first two rounds and their scores after that. Simpson played well, too, and with nine holes remaining was two strokes ahead of Donald and two off the lead. An even-par back nine left him in a tie for sixth (a second-place finish would have netted him the money title even with a Donald victory).

It was a refreshing way to end the season, and a welcome development for the sake of Player of the Year clarity. Nobody has more than Donald’s two PGA Tour victories, plus he swept the money title and Vardon Trophy for low scoring average, not to mention taking two victories on the European Tour, including their PGA Championship. And he wrapped up his U.S. campaign in style at Disney.

Donald, by the way, moved into No. 1 in another category. The best putter in the game over the last few years, he jumped from second to first in strokes gained-putting for 2011 at Disney (passing Charlie Wi), leading the category by gaining .844 strokes per round on the field with his performance on the greens. He gained a shade over two strokes per round at Disney, and three strokes in the final round.

On the top 125 front, Justin Leonard, Billy Mayfair, Tom Pernice, and Sunhoon Kang moved in, while Bobby Gates, Roland Thatcher, Tiger Woods, and Stuart Appleby moved out. Some notes there:

Leonard, already exempt, moved up with a runner-up finish, Pernice and Kang with T3s, and Mayfair a T6. The 52-year-old Pernice made the top 125 in just 12 starts via non-exempt status. Having stated a preference for playing the PGA Tour over the Champions Tour, he’ll probably tee it up more with the younger set in 2012 despite a chance to make hay on the senior circuit. Veteran Mayfair won the Q-School last year; he avoided a return trip.

Last year Thatcher moved into the top 125 at 122nd with a runner-up finish at the Disney. This time he went the other way, slipping from 120th to 127th after missing the cut. Woods and Appleby are exempt for 2012 despite not finishing in the top 125.

D.J. Trahan claimed the 125th spot when he birdied his final hole and Gates bogeyed his to fall to 126th. James Driscoll, the bubble boy entering the week at 125th, shared the first-round lead and finished T12th to jump to 114th.

Bio Kim entered the final round tied for third with a chance to move into the top 125 with a tie for second or better. Instead, he shot a 76 and didn’t even finish in the top 150, which would have earned him partial status for next year.

Higher up on the money list, Spencer Levin finished the year ranked 31st to just miss out on the Masters, which requires a top-30 money finish or making the field at the Tour Championship (Levin didn’t). He finished 37th at Disney, needing to finish two strokes better to get into the top 30 on the money list.

Back to Donald, here is a look at his final-round 64, which came on a day when only one other player bettered 67 (Retief Goosen 65). It was more spectacular than consistent, as it included two bogeys and a three-putt par—but 10 birdies on the first 15 holes.