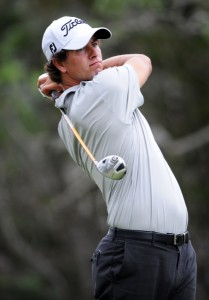 It took only a week for Adam Scott to get it together. Copyright Icon SMI.

I posted last week about the terrible play of Adam Scott and Camilo Villegas in 2011 and especially at the Honda Classic, where neither of them shot better than a 77. Here we are just seven days later and Scott is in contention through 54 holes at the WGC-Cadillac Championship, just three strokes off the lead with a 10-under 206 total.

I noted a week ago that Scott played well for 14 holes at the Honda before dumping two balls in the water on the 15th and making a quintuple bogey followed by a double bogey two holes later, and wondered if maybe he simply lost his focus after that and wasn’t necessarily in a hopeless state despite shooting 77-82. Apparently that was the case, but I’m still surprised to see him on the leaderboard the very next week. (Villegas also has returned to at least some measure of respectability this week, opening with 71-71-73.)

It’s a good reminder of how quickly things can turn around in golf. That’s good to keep in mind the next time you hear somebody say, “There’s no way Tiger Woods can win the way he’s playing now.” There’s always a way for somebody to win next week no matter how they’re struggling this week. There are plenty of instances of players missing the cut and then going on to win their next tournament.

As for Scott, he’s driven the ball better than anybody so far at Doral. He leads the field in fairways hit with 30 of 42, unusual for such a long hitter. He’s also tied for third in greens in regulation with 41 of 54. Putting is generally Scott’s weakness, but he switched to a long putter a few weeks ago and it’s working fairly well this week. Through three rounds he has gained two strokes over Tour average putting from the distances he has faced—not great, but slightly-better-than-average is much better than Scott’s norm.

Putting helped save Scott from his one near disaster this week. After hitting four balls into the water on par 3s last week (and six in all), he again found a hazard in the first round on the par-3 9th hole at Doral (his 18th). But he holed a 24-foot putt to save a bogey. That’s one of five putts he’s made longer than 10 feet in the first three rounds.

Scott is putting better than Woods, who is tied for 30th after rounds of 70-74-70. Woods is putting three strokes worse than a Tour average performance over the first three rounds.

The one bright spot for Woods is iron play. He’s 8th in greens in regulation through three rounds and has left himself 26 birdie or eagle putts inside 20 feet. He has converted only seven of those. He has nine birdies in all, including a two-putt after hitting a par 5 in two and a hole-out from the fringe, but that ranks only 42nd.

Meanwhile, his driving his been wild, hitting only 18 of 42 fairways. What’s more, he hit two horrid tee shots on Friday, a low snap hook that traveled only 122 yards and a pop-up that went 188. Those were a clear indication that his swing change is still a work in progress—but, as Scott is showing this week, not a sign that he can’t get it together soon.