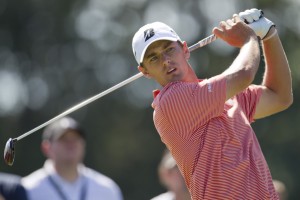 Charles Howell is in danger of missing the field at the Masters in his native Augusta for the third straight year. Copyright Icon SMI.

Charles Howell III and the Masters were a storybook tale waiting to happen. We’re still waiting. In fact, it has turned into a sad story the last couple of years.

This is the third year in a row Howell has come to late March desperately trying to qualify for the major tournament that means the most to him, the one played in Augusta, Georgia, where he grew up. He didn’t make it in 2009 and 2010. He won’t make it this year, either, unless he wins either this week at Bay Hill or next week in Houston. At least he gave himself a chance on Friday by shooting a 65 to pull within two strokes of the lead through 36 holes.

It wasn’t supposed to be this way. Howell was the golden child who grew up playing Augusta Country Club, which borders Augusta National’s Amen Corner, and established himself as one of the top junior players in the country. He went on to become the nation’s best collegian and made it to the PGA Tour at the age of 21 by making enough money through sponsor exemptions to earn his playing privileges. At 23, he won his first tournament.

He drove the ball a long way off the tee and hit his irons high—a game tailor-made for Augusta National. Surely, he would wear a green jacket one day.

There has been an Augusta native who won the Masters. Larry Mize did that in 1987 when he felled Goliaths Greg Norman and Seve Ballesteros in a playoff. But Mize spent much of his childhood living in Columbus, Georgia, though he was born in Augusta and returned there for his high school years. Howell’s Augusta roots were deeper (though he went to college at Oklahoma State and has lived in Florida since then) and his golf pedigree more impressive.

What has gone wrong? It’s hard to pinpoint one thing. He ranked in the top 10 in driving distance in his first two years on Tour, but since then has settled in among the lower end of the top 50. That’s long, but not quite long enough to overpower courses. And he’s generally near the bottom in driving accuracy, so driving is not a strength overall.

Howell tends to point at his short game as what has held him back, and many observers agree. Indeed, he usually ranks outside the top 100 in scrambling (percentage of times he gets up and down when he misses the green in regulation). Oddly, though, his scrambling rank shot up to 7th in 2010 when he also ranked 21st in total putting. Unfortunately, his long game became more unreliable as he had his second worst career ranking on the money list.

In a way, things just don’t add up. Howell has managed just two career wins despite playing well enough to compile 12 second-place finishes and 52 top-10s. As I pointed out about Tim Clark last year, those kinds of numbers are usually posted by steady, short-hitting players who aren’t prone to spectacular scoring. That’s not Howell’s profile, so his play under pressure can legitimately be questioned.

But his week-to-week consistency in the last couple of years suggests he’s turned into a steady Eddie type who plays fairly well most of the time without appearing near the top of the leaderboard a lot. Early in his career, it was the opposite: His scoring average wasn’t that great but he was high on the money list. But last year, even while having a down year in earnings, he ranked 24th in scoring average. So far in 2011, he’s 13th in scoring but 52nd on the money list with four finishes between 10th and 14th but none better than that.

If he’s going to win, Howell needs to summon some of his more aggressive tendencies from his younger days and regain the short-game touch he had in 2010 (his numbers have dropped off in scrambling and putting this year). In the very short term—this week and (maybe) next—he’s got to concentrate on the job at hand and not put too much pressure on himself to make it to Augusta, unless he finds a way to make that motivation work for him.

In the long term, making the Masters and other majors is only a first step. Next would come playing well in the majors—another area where he has been a disappointment. In 31 career majors, his best finish is 10th. For that matter, in 25 appearances at the Players Championship and World Golf Championship events his best finish is 9th.

That’s certainly not what was expected of Howell when he hit the Tour fresh off a sensational amateur career. Nor did we think he’d be struggling to make the Masters field year in and year out. At age 31, Howell is a phenom no more. Attention has turned to young guns like Rickie Fowler, today’s equivalent of Howell a decade ago.

There’s still time to turn things around. Having made the field at only three of the last eight majors, Howell has a long way to go to become a major part of the golf conversation again. But a win this week to make the Masters field would be quite a good story—if not the storybook tale just yet.