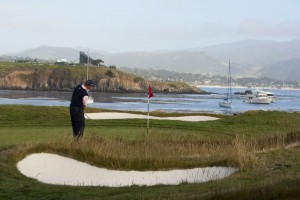 There were two problem holes at the U.S. Open that Pebble Beach will need to consider changing before the championship returns in 2019—the 14th and the 17th.

The par-five 14th was a love-it-or-hate it hole that ranked third on the course in difficulty—nearly unheard of for a par five—and produced more than its share of triple bogeys and quads. It’s a long par five, reachable in two only downwind (it played into the wind all four days this year), but the heart of its difficulty is the green and surrounding area.

We heard the NBC announcers say that there are “no cuppable areas” on the right side of the green, but it’s actually more severe than that. Not only can you not put a hole there, the ball won’t even stay on the right front or right middle portion of the green. So, the green is effectively the small area behind the left front bunker—and an elevated target at that.

What’s more, there are severe drop-offs to the left, the rear, and the front. The big numbers come when players can’t hit the tiny target from well below, the ball either rolling back to their feet or off the other side.

I have a simple, yet radical, solution. Take that entire right front and right middle of the green and turn it into fringe. Cut it at whatever height is necessary so that the ball will stay there—fairway height might even do it. (It’s not necessary to make the ball stay on what is the very front right portion of the current green, but if you get it deeper than that, the ball would stay.)

This would also help the player who missed the green to the left and went down the severe slope. He wouldn’t have to worry about pitching it too hard, and then having the ball trickle, trickle, trickle all the way down to below the front of the green. Actually, though, on the slopes to the left and behind the green, I would prefer to see rough grown to near the top so the ball doesn’t roll all the way down. I’m usually in favor of chipping areas around greens to let the ball run off, but in this case the target is just too small and the slope too severe.

The result of all this would be a tiny green, probably the smallest in championship golf (the only reason I call this solution radical). But the green might as well be that small now anyway. And this way, the penalty for missing the target wouldn’t be excessively harsh, as it is now. What’s more it’s a solution that doesn’t involve any earth moving—just growing grass.

The approach shots to the tiny green would mostly be wedge shots. True, it wouldn’t be much of a target for going for the green in two in conditions that make the possible, but if getting up and down for birdie were reasonably possible it might be worth it.

On the par-three 17th hole, there’s also a problem with the “effective size” of the green. With the green’s hourglass shape, the preferred hole location is on the left rear. But it takes a mid-iron or long-iron to reach the back of the green, and with the greens as firm as they are for a U.S. Open it’s nearly impossible to hit and hold that portion of the putting surface. It’s a case of the green not matching the length of the hole. You can’t plan on bouncing your tee shot to that part of the green because you would have to land it on the extremely narrow central portion. For the same reason, there’s no safe shot, no option of playing short and right.

Only about 20 percent of players hit the green in regulation during the tournament, and just a handful managed the feat in the final round. Basically, the only way to handle the hole was to repeat the heroics of either Jack Nicklaus in 1972 or Tom Watson in 1982—bang your tee shot off the flagstick like Nicklaus or chip in like Watson.

Given the USGA’s recent course set-up philosophy, I’m surprised they didn’t move the tee up on this hole to give the players a chance to stop the ball on the back portion with a shorter iron. Or, with the tee back, play to the front right portion of the green. (They did have the hole on the right side on Saturday. It was near the back of that right portion and cut into a slope—a position no one could remember but it worked out reasonably well.)

While moving the tee up is one solution, and keeping this green softer than the others is another, I also propose a simple fix that is the opposite of my idea on the 14th. Simply enlarge the green in the back and on the left to make it more reasonable for a player to keep his tee shot on the green. This would involve some replanting and maybe a little bit of regrading, but would not require a wholesale redesign of this distinctive green, which has been the site of such historic events.