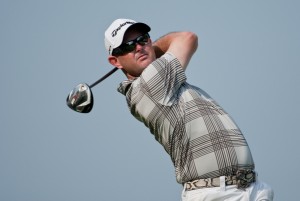 Rory Sabbatini's first run at the top stalled. Can he sustain it this time? Copyright Icon SMI.

Rory Sabbatini appeared on the verge of becoming one of the game’s elite players in 2006-7 when he finished 12th and 6th on the money list, scored a couple of victories, and contended in the Masters.

The funny thing was that there wasn’t much about his game that pointed to him being the next great player. Yes, he had a lot of confidence, and even brashness in calling out Tiger Woods at one point (if not a lot of smarts; Woods handed Sabbatini’s head to him in a couple of subsequent outings). Unfortunately, he didn’t have the skills to back it up.

Even during those good years of 2006-7, Sabbatini’s average rank in driving distance was 87th, in driving accuracy 172nd, in total driving (a combination of the two) 178th, in greens in regulation 148th. His short-game numbers weren’t even that great in 2006, so it wasn’t easy to see how he got such good results. One might have thought that he did it by making hay in a few hot weeks, but he actually was consistently pretty good with 10 top-25 finishes. Was he doing it with mirrors?

The funny thing was that when Sabbatini hit the Tour in 1999, he was one of the longest hitters in the game, ranking fourth in driving distance. He stayed in the top 25 through 2002, but had lost that edge by 2006. His distance fall-off wasn’t accompanied by a corresponding increase in accuracy, at least measured in terms of hitting fairways, though it’s possible he corralled his wilder misses into something more manageable.

One answer to how he did so well was that iron play was better than his GIR numbers would suggest because he’s an aggressive player who fires at the flag a lot. That enabled him to rank reasonably high in birdies (but still only an average of 44th in those two years). In 2007, it was more clear how he managed to hold his position near the top—he was 2nd on the Tour in scrambling, which reflects how often a player makes par after missing the green in regulation.

In the next three years, Sabbatini failed to make the top 100 in scrambling. So, it’s not surprising that he made very little noise with his play in 2008-10 except to squeak into the top 20 in 2009 when he managed a victory.

Sabbatini found his way back into the winner’s circle again at the Honda Classic this week, and it perhaps should come as no surprise that scrambling was the key. He ranked 21st in hitting greens for the week with 47, but saved par on 21 of the 25 holes where he missed the green—8-for-9 in the first round, 7-for-8 in the second round, 2-for-3 in the third round, and 4-for-5 in the final round.

He putted well overall (and got attention for having changed to a new putter for the tournament), but his chipping and bunker play was even better. He had only 21 putts in the second round, but that was the product of hitting the ball close on a number of approach shots and chipping (or blasting from the sand) close when he missed the greens. An analysis of his round shows that even with a Tour average putting performance, he would have had 23 putts.

His misses were from 15, 32, 20, and 26 feet. He made the rest, but the longest putt he made was from 12 feet. (He did use a putter when he holed about a 33-foot shot from the fringe on the 13th hole, so realistically that was like making a long putt). The 10-footer, incidentally, was for a bogey after he hit into the water on the sixth hole. He had only nine putts on the back nine, capped off by a bunker shot to 2 feet on the 16th, a pitch from the rough to 2 feet on the 17th, and a bunker shot to 1 foot on the 18th.

Sabbatini also putted two strokes better than average during a third-round 66 that boosted him to a five-stroke lead, but was right around average on the greens in the first and fourth rounds (a 71 and 70), leaving him four strokes to the good for the week.

After vaulting himself into contention on Friday, Sabbatini’s play on the weekend was admirably solid as he hit 15 greens in the third round and 13 in the fourth. He entered the final round with a five-stroke lead, but Y.E. Yang kept him on his toes by closing with a 66 as Sabbatini had to match par 70 for the victory. Yang pulled within one with a birdie on the 15th, but Sabbatini coolly answered with a birdie from 16 feet on the 16th to go back ahead by two. Routine pars on the last two holes enabled him to withstand a Yang birdie on the 18th and claim his sixth career win at age 34.

Sabbatini was competing for the eighth straight week, going against conventional Tour wisdom that playing too many weeks in a row leads to physical and (especially) mental fatigue, which hurts performance. Instead, Sabbatini said he felt that the way his game was progressing he thought something good might be around the corner. He even played in Mexico last week in a second-tier event held the same week as the WGC-Accenture Match Play, which he didn’t qualify for as he was not in the top 64 in the world. Sabbatini finished fifth there, setting himself up for the Honda.

“I’ve been feeling like things are going the right direction and trying to build on it each and every week,” he said on Sunday. “I felt like something good was going to happen. Really, I guess I was trying to flush a win out.”

This coming week is another WGC event that Sabbatini didn’t qualify for, the Cadillac Championship at Doral. This time, he’s not going to the opposite-field event in Puerto Rico. Eight weeks is enough. He’ll be back in the saddle at Tampa the following week, but says he will have to make a decision about Bay Hill the week after that.

(Correction: Sabbatini’s victory got him into the Cadillac Championship by putting him into the top 10 of the current FedExCup standings. So that’s nine weeks in a row, and Tampa would make 10.)

“My wife made me promise her that when I won, I’d take some time off,” Sabbatini said.

Also still to be determined is how high Sabbatini can go in the game. So far in 2011, he ranks 102nd in total driving and 87th in hitting greens. Not great, but better than he was when he was making his run in 2006-7. At this stage in his career, it’s hard to imagine those numbers will get a whole lot better, so Sabbatini will probably go as far as his short game can carry him.