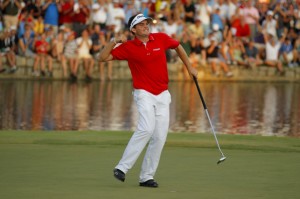 Water comes into play on nine holes, and on 11 shots. We’re not talking about any narrow creeks here. The water is all in the form of ponds, which makes it like a Florida course, only hillier. The course was given this personality by original designers Robert Trent Jones (back nine), Joe Finger (front nine), and original redesigners George and Tom Fazio, who did their work within a few years of the course opening.

In his 2006 redesign, Rees Jones took it a step further, adding a pond on the sixth hole and extending hazards on the seventh, eighth, 11th, and 18th holes to bring them more into play. It could be argued this was an enhancement consistent with the course’s original philosophy or that it was overkill—or both.

On the 18th hole, it was clear that both Jones and the PGA of America wanted the water to be a factor on both the drive and the second shot. Jones extended the water left of the fairway back toward the tee by about 15 yards to make it more of a factor. Then the PGA set the hole up to try to make the players take on the water with their tee shot instead of laying up short of where the water starts.

First came the decision to make the hole a par four and not a par five (from a longer tee the hole can play as much as 575 yards). There’s a good argument that the hole is better as a risk-reward par five, with players facing the decision of whether to go for the green in two over water. But I think the PGA didn’t want to change a hole that had provided such drama with Jerry Pate in the 1976 U.S. Open and David Toms/Phil Mickelson in the 2001 PGA. Also, they wanted to bring the water to the left into play on the tee shot.

The hole never played to its full listed yardage of 507. It was a shade over 490 yards the first two days, then got shorter over the weekend. At 490, many players were laying up off the tee to keep the water out of play, even though it meant hitting something like a three-iron for their second shot.

Mickelson’s view of the hole was that it didn’t matter where they put the tee, because, he said, there was not enough of a landing area farther down between the water and the bunkers to the right. “There’s no fairway to hit to,” is the way he put it. As a long hitter, he was concerned about going through the fairway on the slight dogleg. But it was also the view of a player who doesn’t hit the ball very straight.

Scylla (water left) and Charybdis (bunker, rough, and trees right) did catch many players as the hole played to an average of 4.58. But at the very end, Keegan Bradley and Jason Dufner stepped up and hit nothing but pure shots under pressure. Between the two of them on the 72nd hole of regulation and in the playoff, they were four-for-four at hitting the 18th fairway (Bradley with a hybrid, the shorter Dufner with a driver) and four-for-four at hitting the green. They played the hole a combined 1-under, with Dufner getting a birdie in the playoff.

It made for interesting decision-making with Bradley holding a two-stroke lead when the playoff reached 18. Some might have been tempted to lay up off the tee, then maybe even lay up again short of the water with the second shot, figuring that the likelihood of Dufner making birdie was practically nil.

Ah, but Dufner did make birdie, so it turned out Bradley needed a par to win. Good thing he took the bold route, confident that he could execute.

Just as the unheralded Bradley and Dufner delivered a thrilling finish, the same could be said for the unloved Atlanta Athletic Club. It’s not even ranked on the Golf Digest or Golf Magazine top 100 courses lists (and I’m not saying it should be), but it came through as a stage for drama.

The finishing holes were hard, but it’s not like the course is a torture track for the pros. There were at least 25 subpar rounds every day, even with a par of 70, so there were a lot of birdies being made. But then there’s that gauntlet of 15 through 18 for players to get through at the end.

Birdies and bogeys—not a steady diet of pars—are what bring excitement and drama. There may be more artful ways of doing it than by having water on every other hole, but if that’s what you’ve got, well, OK.

One Response to “Atlanta Athletic Club Defined by Water”