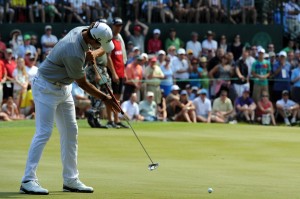 The long putter has been vital to a reversal of fortunes for Adam Scott. Photo copyright Icon SMI.

Let’s credit Adam Scott with the best decision of the year. No, I don’t mean asking Steve Williams to caddie for him when Tiger Woods was out with an injury. The really good decision was to switch to the long putter.

Over the course of 2009-10, Scott was the second worst putter on Tour, behind only Billy Mayfair. The Tour’s strokes gained-putting stat tells us that he was losing more than eight-tenths of a stroke per round with his putting compared to a Tour average performance from the distances he putted from.

In his first two tournaments of 2011, Scott was even worse. Then while taking a break in Australia he picked up a long putter, and saw an immediate difference. “It took only a couple of days and I started liking it a lot, because I saw a lot of putts going in,” he said at the WGC-Bridgestone Invitational last weekend, which he ended up winning.

Scott put it in his bag at the next tournament, the WGC-Accenture Match Play. He didn’t care about any stigma, he said. “I just want to make putts and make the game easier for myself. I turned a lot of heads in the locker room, but I think it’s justified itself so far.”

Indeed, it has. In seven measured tournaments since switching to the broomstick, Scott’s putting has been better than average, with a strokes gained figure of .193. That’s compared -.855 from 2009 through the first two tournaments in 2011, an improvement of a stroke a round on the greens.

Scott’s putting performance in the first two tournaments this year was so bad that his overall strokes gained is still negative for 2011. At the Sony Hawaiian Open, his last tournament with the short putter, Scott missed so many putts that he lost 7.5 strokes on the greens in two rounds, causing him to miss the cut instead of sitting four or five strokes off the lead through 36 holes.

No wonder he tried the long putter. “I was so uncomfortable with the short putter at the time that you could have given me anything to putt with and it would have been better,” he admitted last weekend.

Scott needed to show patience with his new implement. He lost in the first round of the Match Play, then had one of the worst performances of his career at the Honda Classic, where he shot 77-82. The biggest reason for the sky high scores were a quintuple bogey, a quadruple bogey and six shots in the water in all, but his putting was well below average, too. Was the bad putting a lack of concentration due to all of his other problems that week, or an indication that the long putter wasn’t the answer?

The very next week, Scott rebounded to finish sixth at the WGC-Cadillac Championship with above average putting. And in his next tournament, he finished second at the Masters.

Scott followed with mediocre putting in the next few tournaments, but in terms of confidence he had definitely turned the corner. And he putted extremely well (2.047 strokes gained per round) in finishing third at the AT&T National and winning the WGC-Bridgestone (1.838).

“[The long putter] has helped me from 10 feet in, a huge amount,” Scott said. He admitted that feel on the long putts hasn’t been quite as good, but he’s not so worried about that because he feels good about holing any four-footers he leaves himself. He also said early in the week of the WGC-Bridgestone that he hasn’t been making as many 25-footers with the long putter, but that changed at Firestone. He ended up holing four putts in the 25-to-29-foot range during the tournament.

The feel issue did crop up in the first couple of rounds when he left himself second putts of 12 and 8 feet on a couple of holes. He made the second ones, but for the year he ranks 182nd on Tour in avoiding three-putts. For that matter, he is still only 180th in converting putts in the 3-to-5-foot range, though his awful results with the short putter in the first two weeks of the year has something to do with that. But he ranks 15th in holing putts from 5 to 10 feet.

The important thing is that Scott has turned his career around with his putting. Once one of the most promising young players in the game, Scott, now 31, managed just one victory over the course of 2009-10 and was not the force he had been.

“My short putting was really ruining my good golf,” he said in March shortly after making the switch. “And it was very frustrating to the point where I just didn’t really feel like playing because every round I played, most likely I would leave two or three shots out there and that adds up to a lot at the end of a week.”

Now he’s a decent bet to become the first player to win a major championship with a long putter. If not this week in the PGA Championship at Atlanta Athletic Club, it could happen somewhere down the road, because it seems unlikely Scott would go back to a conventional putter after this turnaround. Vijay Singh bounced back and forth from a long to a regular putter (and a belly putter, too), but didn’t win any of his three major titles with a long one.

Would a player winning a major championship help or hurt the acceptance of the long putter, which some view with disdain? I don’t think it would really make any difference. The putters have been around long enough—more than 20 years—that they are well established as part of the game, and it would be strange to ban them after so long.

I was never a fan of the long putter, and early on I would have been in favor of banning it. But it would be rather late now. (I would like to see anchoring the putter with your body to be outlawed. That’s not likely, either, but not quite out of the question.) And anyway, if a long putter were really an unfair advantage wouldn’t more players be using them?

Long putters are still seen as a last resort for those having major putting problems—and Scott’s success will do nothing to change that.