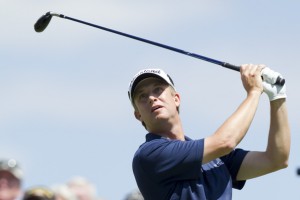 David Toms has had a fine career, but he's a long way from being legitimately considered for the Hall of Fame. Copyright Icon SMI.

I have noticed a strange disconnect between the way people talk about potential World Golf Hall of Fame candidates and the actual voting for the Hall of Fame.

The latest Hall of Fame chatter revolves around David Toms, who scored his 13th career victory (with one major) at the Colonial last week after a near-miss at the Players Championship. Last year it was Jim Furyk, in the wake of his three-victory season that pushed him to 16 wins with one major.

The assumption seems to be that Furyk right now and Toms with a couple more wins or a major are on the brink of getting into the Hall. In this discussion at golf.com, it is postulated that standards have been lowered lately, bringing in players not much beyond Toms’ level.

Meanwhile, in the real world of Hall of Fame voting, Davis Love III—a far, far better player than either Furyk or Toms—hasn’t even come close to making the Hall. Neither have Mark O’Meara or Fred Couples. Corey Pavin and Hal Sutton (15 and 14 wins with one major each, admittedly with significant down periods in their careers) earned so little support that they have fallen off the ballot, as has Craig Stadler (13 wins, one major).

Here are the players who have made it via the PGA Tour ballot in the past decade:

The only evidence of a possible lowering of standards is that anyone with three majors seems to automatically be in (see Nelson and Stewart). In Stewart’s case, there was the emotional element of his death plus the argument that he would probably have won more tournaments had he lived. I quibble with the choice of Nelson since he didn’t win a lot nor was he consistently among the top players in the game—he only finished in the top 10 money winners twice. But the above list shows that Hall standards haven’t been lowered in the PGA Tour category, especially not for owners of one major like Furyk and Toms.

In the last election, Couples was named on 32 percent of the ballots, O’Meara on 29 percent, and Love on 27 percent. To make the Hall, you need either 65 percent or, if nobody gets that much, 50 percent will do it (that didn’t apply last time, as Els was elected).

The lack of love for Love is a mystery to me. In my thinking, he should be ahead of Couples and O’Meara and should already be in the Hall. When Wadkins took forever to get elected, the talk was that he was hurt by the fact that he wasn’t well liked. That’s certainly not the case with Love, so it’s clear that the problem is that each has only one major.

Doesn’t 20 wins count for something? And I know it’s not really a fifth major, but Love did win two Players Championships, which should be some sort of extra credit. More importantly, he was consistently one of the best players of his generation, and he sustained that excellence for a long period. To place hard facts on the nebulous concept of “one of the best,” I look at how often a player was in the top 10 on the money list. Love was there 10 times, which is more than recent Hall of Famers Norman, Stewart, Crenshaw, Price, Nelson, Green, Strange, Wadkins, or Els, and as many as Kite.

It looks like Love won’t make it on the next ballot, either, (nor will Couples or O’Meara) because that’s when Phil Mickelson becomes eligible having turned 40 and he will certainly be elected. Furyk joins the ballot, too, but he should fall in line behind Love, Couples, and O’Meara.

In the ensuing few years, only David Duval and Justin Leonard will qualify as new ballot entries in the PGA Tour category, and they won’t make the Hall unless they suddenly become big winners again. So, Love and the others should have their chance in two, three, or four years if they can make that 50 percent standard. But Furyk won’t make it unless he adds at least a couple of wins or a major or a second Player of the Year award. Toms needs even more than that—and he’s already 44 years old.

My biggest beef with the Hall criteria is that players go on the ballot at age 40 years. I understand that you can’t have a five-years-after-retirement eligibility standard because there’s usually no definitive retirement date in golf, and many players don’t retire at all, playing straight through to 50 and then on the Champions Tour. But at 40, many players’ careers are still in full swing, making it premature to judge their Hall worthiness. Why not make it 45, when nearly everybody is slowing down?

Which brings me to the silliest thing about the Toms talk. As a winner of 10 or more tournaments, he went on the ballot at the age of 40—and already has dropped off because almost nobody voted for him.

One Response to “World Golf Hall of Fame Talk vs. Reality”