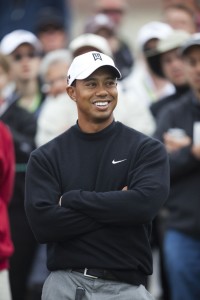 As the 2011 season gets underway, here’s Part 1 of a preview of what to look for from various players this year, with special emphasis on where they need to improve. Today, Tiger Woods and Phil Mickelson.

There were many intangible reasons for Tiger Woods’ fall of the cliff in PGA Tour performance in 2011: rustiness from a four-month absence from the game, some of it spent in rehab; psychological effects of having his reputation shattered by his off-course shenanigans; distractions from going through a divorce and the effect it would have on his relationship with his children; changing swing teachers; a neck injury; a loss of confidence.

Most of those will go away in 2011. I fully expect a comeback from Woods. The question is of degree. It will be very hard to climb back all the way to where he was, which after all is a pinnacle that perhaps no one else has ever reached. But he should be ready to resume winning and to resume his pursuit of Jack Nicklaus’ career record of 18 majors.

Looking at it strictly in terms of his performance on the course, the three biggest areas where he needs to get back on track are scrambling, hitting greens in regulation, and making putts in the 15-to-25-foot range.

Short game
Woods’ biggest dropoff in 2010 was actually in getting up and down for a par after missing the green. In this basic but underpublicized stat, Woods ranked first on the PGA Tour in 2009, saving par 68.18 percent of the time. In 2010, he ranked 166th, with a par-saving percentage of 54.30. (Actually, he didn’t play enough rounds to qualify for the ranking but would have ranked 166th.)

That’s an extraordinary fall. It’s not necessarily all attributed to the short game. To some extent, he may have been missing greens in worse spots than before, which would hurt his scrambling figures. Still, the numbers can’t be that misleading, you’d have to say that his short-game prowess pretty much abandoned him in 2010.

Maybe this is where his absence from the game hurt him the most. He played only nine rounds through the end of May, not enough to keep his short game sharp. And in worrying about his swing, he might have neglected this area of his game. It’s even possible that with less practice and less tournament experience, he might even have had more trouble than most players adjusting to the groove change—he ranked 189th in scrambling from the rough.

I’ve never been under the impression that Woods has relied on any of his teachers—Butch Harmon, followed by Hank Haney, and now Sean Foley—for much help with his short game. All indications are that he is solidifying his swing with Foley. But if he’s smart, Woods is spending a lot of time this winter working on his short game.

Approach shots
One of Woods’ most impressive statistics is that he has led the greens in regulation statistic six times and consistently been near the top. Why is that so impressive? His schedule is concentrated on major championships, WGC events, and other tournaments played on strong courses so there is no chance to pad his stats on easier courses. If you look at other players with similar schedules like Ernie Els or Padraig Harrington, you will find that their GIR stats are pretty poor. It’s not that they are terrible ball-strikers, it’s that they play tougher courses.

Those proximity numbers indicate that his poor GIR on short-iron shots resulted from firing at the pin. But those GIR numbers are way down from the previous year. It seems that what happened was Woods wasn’t hitting his short irons quite as accurately, but didn’t adjust by playing any safer and therefore missed a lot more greens.

Driving
Driving accuracy has been Woods’ weakest stat through the years, though you can’t say it has hurt him much. While he won seven majors in six years with Haney, Woods’ driving accuracy rank in those years was 182, 182, 188, 139, 152, and 169. So last year’s rank of 167th was right in line. But the devil is sometimes in the details, and the stats don’t show how many of those tee shots were so wayward that they landed in jail.

And here’s a note that he might have discussed with Foley: Whereas in the previous several years his misses tended to be to the right, in 2010 more than half of his misses were to the left.

Woods averaged 295.8 yards in driving distance to rank 26th. That’s a far cry from the 316.1 yards he busted it when he ranked second in 2005, though it’s in line with his 2008 and 2009 numbers. While still a long hitter, his ability to absolutely overpower a course may not be what it used to be. And with the shorter distance, the lack of accuracy hurts more. When you average 316 yards off the tee wildness is less of a concern than when you’re 20 yards shorter.

Putting
Some observers detected a shakiness on the greens in 2010. But the stats show that the problem wasn’t missing putts he should have made—it was that he made so little from beyond 15 feet.

According to an advanced putting metric put together by three MIT professors that more accurately reflects putting skill than the PGA Tour stats, which are compromised by failing to take into account the length of putts, Woods was the best putter on Tour from 2003-8 (the period they analyzed). It’s safe to say that wasn’t the case in 2010. (By the way, the Tour is considering adding the professors’ stat to their menu of statistics, which would be a great move.)

If he’s going to catch Nicklaus, Woods had better start making more of those 15-to-25-footers, stop missing so many greens with short irons, and display the kind of short game he’s demonstrated through most of his career.

There is also reason to think that Mickelson will be less distracted in 2011. Last year was impacted by the cancer treatments of his wife and mother, which should be less onerous in the coming year. Regarding his own health, Mickelson had problems over the first half of last year with what was eventually diagnosed as arthritis. If medication is working, he will be less affected this year. Here’s a look from a performance aspect:

Fortunately, Mickelson has retained his driving distance even at age 40, ranking 13th last year at 299.1. And there’s been plenty of evidence in the last decade that if you hit it long, you don’t have to hit it straight to be a winner. But when your accuracy dips to the bottom 10 on Tour, that could be a problem.

Approach shots
Mickelson’s greens in regulation ranking has been on the decline over the last five years: 21, 84, 70, 127, 155. If he wants to win more than once in 2011, it would behoove him to get that ranking back up to where it was.

It’s no mystery that “go for broke” Phil’s GIR numbers are adversely affected by shooting at the flag so much. Like Woods, this is reflected in his proximity to the hole figures. On approach shots of 100-125 yards, Mickelson ranked fifth on getting his approaches close to the hole but 115th in GIR. On approaches of 125-150, he was 3rd in proximity and 165th in GIR.

With that pin-seeking mentality, there’s no reason for Mickelson to become a GIR machine, but some improvement over 2010 is needed. And on occasions when he feels his iron game isn’t quite as sharp, it might benefit him to aim just a little bit away from the most dangerous flags.

Scrambling
It may have something to do with the positions in which he leaves himself, but Mickelson’s reputation for having the best short game on Tour isn’t borne out by the statistics. In his career, he has ranked in the top 10 in percentage of getting up and down for pars only three times—and outside the top 100 seven times. Last year was a pretty good one for scrambling, with a ranking of 31st for saving par 61.84 percent of the time.

Putting
Mickelson’s reputation is that he misses short ones too often. That’s not quite the case according to the stats, though perhaps for an elite player he should be better. The Tour’s stats on putts in the 3-to-5-foot range extend back to 2002, and over that period his average rank is 58th.