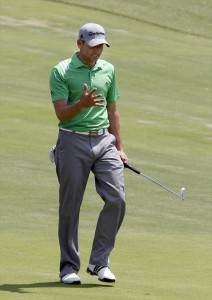 Sergio Garcia had an epically up-and-down week that on balance turned out not very well. Photo copyright Icon SMI.

Some thoughts about this past weekend’s WGC-Cadillac Championship and Puerto Rico Open:

IT’S HARD TO IMAGINE any player having a stranger week in 2012 than Sergio Garcia at the WGC-Cadillac Championship. Certainly, there will be no week that’s more erratic.

Garcia’s first round was an exercise in schizophrenia with a brilliant five-under 31 on the front nine followed by a nightmarish 44 on the back. And that wasn’t even a clear-cut choice for his oddest round of the week. In the final round, Sergio did a John Daly imitation by pumping four balls into the water on the par-four third hole on his way to making a 12. But instead of packing it in like Daly, Garcia rallied and played his next 14 holes in four-under. Just to complete the wackiness, he finished a round he had started with an eagle on the first hole by making a double bogey on the 18th.

As in his first-round 75, the disasters outweighed the good parts as it added up to a closing 76. With rounds of 74 and 68 in between, Garcia tied for 60th in the 72-man field. This despite making an eagle and 21 birdies—matching winner Justin Rose (23 birdies) in having subpar holes totaling 23-under. He also made 15 bogeys, a double bogey, a triple bogey, and his eight-over hole. Garcia had only three pars in the first round and his 32 for the week was the least in the field. (The second least was runner-up Bubba Watson with 35).

Adding to the weirdness was that Garcia—a notoriously poor putter—had an excellent week on the greens. He ranked sixth in strokes gained putting, gaining more than four-and-a-half strokes on the field for the week. In fact, Garcia putted out of his mind in the final round. He didn’t miss a putt inside 9 feet, 9 inches and his strokes gained putting number was a rarely-reached plus-4 (4.077 to be exact). On top of that, he also holed a bunker shot on the 13th hole. So he turned an 81 or 82 into a 76.

Of course, he also turned a 68 into a 76 with his awful third hole. He hit his drive into the water on the right and had to go back to drop in a spot that left him a shot of some 230 yards, most of it over water, with water to the right as well. His first three shots drifted to the right and into the drink, forcing him to keep hitting from the same spot until he finally steered his fourth attempt to the left of the green. On the next hole, the 236-yard par-three fourth, which also features water short and right, he barely avoided hitting his tee shot in the water before making the first of three straight up-and-down pars that were impressive in their own way.

Garcia was so lost in the wilderness in 2010 that he took the latter part of the year off and didn’t play in the Ryder Cup. He showed signs of life on the PGA Tour in 2011, then won twice in Europe in the fall to climb back into the world top 20. But at age 32 he’s still more question mark than exclamation point, and his performance at Doral only highlights that. Will he make the European Ryder Cup team? If he does, there’s one good thing—if he’s on his way to making a 12 he’ll be able to pick up before having to complete the hole.

Nothing against George McNeill, who is probably a fine guy and deserved to win after making birdies on the last three holes, but he spoiled a great story at the Puerto Rico Open. If not for McNeill, 20-year-old Japanese wunderkind Ryo Ishikawa would have claimed his first PGA Tour victory with a fast finish of his own—he birdied three out of the last four.

But what would have earned an Ishikawa victory storybook status is that Sunday’s date was March 11—exactly one year after the devastating earthquake that struck Japan. Ishikawa donated all of his tournament winnings in 2011 to relief efforts.

It would have been fitting if such generosity had been rewarded with a victory on the anniversary of the event. For that matter, Ishikawa is likeable guy whose efforts to express himself in English when he plays in the U.S. are admirable and impressive for one so young.

Ishikawa’s play in the U.S. and in major championships has been spotty—some good rounds, mostly early in the tournament, but not many strong 72-hole efforts. He did finally show that he could hang tough with the world’s best when he finished fourth at the WGC-Bridgestone last August. But he had his first winless season in Japan in 2011 and had slipped just outside the world top 50. He was 53rd going into last week, thereby just missing the WGC-Cadillac field.

That left him without a Masters invitation—until early last week when Augusta National gave him a special invitation, something it can do only for foreign players. It hasn’t issued many in recent years, largely because the world ranking puts foreign players closer to equal footing with Americans in having a chance to qualify by normal means (still not quite equal unless they are PGA Tour regulars).

There’s little doubt that a huge reason for the invitation was to please Japanese television—though it can also be justified by the fact that Ishikawa has established himself as one of the bright young players of the game and he was so close to the top 50. Ernie Els, a candidate for a special invitation for a different reason—lifetime achievement—languishes at 68th in the world ranking and has more chances to make the field through the regular criteria as a PGA Tour player.

Ishikawa’s Puerto Rico performance may have gotten the Masters off the hook for criticism. He moved up to 47th in the world ranking, and if he stays in the top 50 for the next three weeks he would have earned an invitation anyway.

It also gave him enough money to qualify for a special temporary PGA Tour membership if he wants one. So the decision to play in Puerto Rico was a wise one. A second-place finish against a field of journeymen and hopefuls isn’t enough to make the case that Ishikawa is a sure-fire star in the U.S., but it was a nice step.

Just when we thought the drama surrounding Tiger Woods would center around when he would win again, the question again became when he would play again. We don’t know if the tightness in his left Achilles that caused him to withdraw after 12 holes of the final round of the WGC-Cadillac was a minor thing or the onset of a problem that will keep him out for a while.

Either way, it’s a bad sign. Long periods of inactivity have been a problem for Woods ever since 2008. Playing more often would be a good thing for his game. Unfortunately, it might be a bad thing for his body. Woods played three weeks in a row for the first time since August 2009, and on the third week his body didn’t hold up (whether that’s a coincidence or not, we don’t know).

Sean Foley hasn’t seen Woods win since taking over as his teacher in the late summer of 2010. But Tiger isn’t his only student. In fact, it’s been a very good three weeks for Foley pupils as Hunter Mahan won the WGC-Match Play and Justin Rose the WGC-Cadillac, with Woods’s runner-up finish at the Honda Classic sandwiched between.

I read somewhere that Rose won with a hot putter. That’s what they say about all winners, right? Actually, he won with mediocre putting—he ranked 33rd for the week in strokes gained putting at +0.114 strokes per round.

He did rank sixth in putts per round and fifth in putts per greens hit in regulation, the old-style (and sometimes misleading) putting stats. But the key was that he hit his approach shots close to the hole (ranked fourth in average distance from the hole on approaches) and also got it close on his short-game shots. He faced only six putts outside of 30 feet all week.

Rose had 23 putts in each of the first two rounds, an extremely low number. But the first round was a scrambling 69 as he hit only eight greens and missed seven in a row on the front nine. He shot a 64 on Friday, with six of his eight birdie putts coming from inside six feet. Rose was in plus territory in strokes gained putting for those two rounds, gaining a total of about two strokes, but his putting was a little shaky on the weekend. Fortunately, he started hitting more greens—14 and 13—to lift him to a ranking of T17 in greens in regulation.

In the big picture, the key to Rose’s victory may have been keeping it together after missing five straight greens on his first nine of the tournament (he also technically missed the next two, but was putting from the fringe 15 feet from the hole both times). Steady ball-striking enabled him to walk away with the win on Sunday—and it can’t be overlooked that 54-hole leader Watson opened the door with a closing 74.