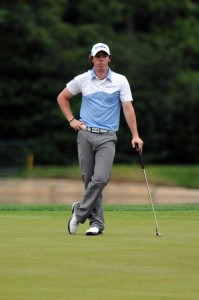 Rory McIlroy got into a Twitter spat on Thursday. Photo copyright Icon SMI.

It was a strange day in the golf world on Thursday. First, Rory McIlroy got unto a Twitter spat. Then Tiger Woods announced he’s coming back to play next week. Far less newsworthy, but still catching my attention, there was one of the oddest Rules situations I’ve ever heard of at the U.S. Senior Open, involving a ball floating on water.

I assume you’re already familiar with the details of the McIlroy-Jay Townsend flap. Briefly, Townsend, an American who used to play on the European Tour and is now a BBC and Golf Channel commenter, followed up on some on-air criticisms of McIlroy’s course management in the first round with a couple of tweets. One called McIlroy’s course management “SHOCKING” and another called it “some of the worst course management I’ve seen beyond under 10’s boys competition.” He also suggested that McIlroy replace his caddie, JP Fitzgerald, with Stevie Williams.

McIlroy responded by tweeting, “Shut up…You’re a commentator and a failed golfer. Your opinion means nothing!”

Both parties were out of line here. I pin more of the blame on Townsend, because he’s the one that started it and because his Twitter comments were over the top and unprofessional. Townsend is entitled to his opinion, but by comparing McIlroy’s course management to a 10-year-old he comes across as someone trying to make a name for himself by creating controversy.

McIlroy’s response brought the conversation further downward with the impolite, “Shut up,” and it also makes no sense to say of someone who is paid to offer his opinions that “your opinion means nothing.”

This incident reinforces my surprise at McIlroy being described in practically saintly terms when he won the U.S. Open. Actually, he’s a kid who often seems to get into hot water, from calling the Ryder Cup an “exhibition,” to impetuously joining the PGA Tour in 2010 and impetuously leaving it at the end of the year, to skipping the Players Championship because he doesn’t like the course, to saying after the British Open that he didn’t like playing in bad weather and wouldn’t adjust his game for it. None of this argues against him being fundamentally a good kid—and perhaps “kid” is the appropriate word here.

If McIlroy sometimes says too much, Woods says too little. In another of his Twitter/website announcements that seem to come from an alternate universe, Woods said he’s “feeling fit” and would be playing in the Bridgestone next week.

Once again, he supplied no significant information, said nothing about having hit any balls yet (leaving us with the impression that he hasn’t), told nothing about what doctors have said about injuries that were supposedly minor in April but have sidelined him for more than three months. Not that we really expected him to.

But to me, the most interesting incident in the golf world Thursday was produced by a U.S. Senior Open competitor named Gary Sowinski (courtesy of this report on the USGA website). Playing from a greenside bunker on the 12th hole, his ball skidded across the green into a pond—and came to rest above the level of the water atop a patch of algae.

Sowinski wanted to play the ball from there, but there was a microphone cable behind his ball. Not a big deal—he was allowed to remove the cable, which was a movable obstruction under he Rules. Unfortunately, the ball sank when he did so. Not to worry. If a ball moves when a movable obstruction is moved, the ball is to be replaced. But, oops, there was now a hole in the algae and the ball couldn’t be replaced in the same spot.

The next step was to find the nearest most similar lie where the ball would stay in place—but could that lie really be replicated? After several tries, Sowinski was able to get the ball to stay in place on another patch of algae.

Then Sowinksi voiced concern that since the ball was bobbing up and down in the water, he might be penalized for hitting a moving ball. No, the Rules official told him, since the ball wasn’t moving relative to the algae it was sitting on, it wasn’t considered to be moving.

After all of this, Sowinski saw that at the spot where he had been able to replace the ball, the bank of the hazard was higher than where the ball originally lay. So he decided that he couldn’t play the ball after all! He elected to take the stroke-and-distance option of the water-hazard penalty, returning to the bunker and dropping a ball. He ended up making a triple bogey.