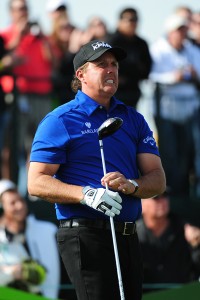 Phil Mickelson won't reach No. 1 until he can control his drives better. Copyright Icon SMI.

We have seen that in this era on the PGA Tour you don’t have to hit a lot of fairways to win a tournament.

Out of bounds and water hazards, though, are a no-no. Case in point: Phil Mickelson at the Waste Management Phoenix Open.

Through two rounds, Mickelson was sitting in fifth place, four strokes off the lead. He began the third round on the back nine, playing the first four holes in 1-under. Then on his next three tee shots he hooked his drive out of bounds on the 14th hole, blocked his drive into a water hazard on the 15th, and pushed his tee shot into a water hazard on the 17th (the 16th is a par-three). Three drives, three penalty strokes—essentially four since there was also a distance penalty on the OB tee shot.

Phil was essentially never heard from again as he began a slide down to an eventual 29th-place finish. Over the last two rounds, he hit only nine of 28 fairways and added another tee ball in the water in the final round. Mickelson shot a pair of even-par 71s on the weekend, but that was on a TPC Scottsdale course where shooting par means going backward.

It’s no coincidence that Mickelson’s greens in regulation figures mirrored his driving accuracy stats. In the first round, he hit eight fairways and 14 greens. In the second round, it was even better at 11 fairways and 15 greens. The third round saw him hit six fairways and 12 greens and the last round three (!) fairways and eight greens.

Wild driving is one thing, but REALLY wild driving can knock a player out of contention real fast. A player can overcome missed fairways with good scrambling and a lot of birdies on the other holes. A long hitter can even make birdies from the rough because he’s hitting wedges to the greens. But it still puts pressure on the rest of your game. And it matters where you miss the fairways. Put it in too many places you can’t recover from, and it’s a recipe for disaster.

Mickelson’s hopes for reaching No. 1 in the world, or at least on the PGA Tour, rest on a couple of things. First, Tiger Woods not regaining his peak form. Second, Phil getting at least a clue of where the ball is going when he hits a driver. He ranked 188th out of 192 players in driving accuracy on Tour last year, and so far in 2011 he’s 160th of 169 while hitting just 44.6 percent of the fairways.

Those driving woes explain why Mickelson settled for a single victory in 2010, that coming on the relatively open confines (even with the tree planting of the last decade) of Augusta National at the Masters. He can win occasionally driving the ball this way, but he’s not going to put together a really big year unless he gains more control.

As for the top of the leaderboard in Phoenix, it featured a nosedive by working-class hero Tommy “Two Gloves” Gainey and a playoff between Jason Dufner and Mark Wilson, whose victory was his second of the year—and don’t tell me you saw that coming.

On the Golf Channel, they billed the playoff as a matchup of the best putter of the week (Dufner, who led in putts per round) and the best ball-striker of the week (Wilson, who led in greens in regulation). This got my attention because I had noticed that Dufner was one of the worst putters on Tour last year according to the PGA Tour’s total putting stat.

This is a stat that the Tour doesn’t publicize, but is based on the ShotLink data on how players rank in putting from various distances. It’s a bit of an approximation—but much better than the Tour’s standard stats of putts per green in regulation or putts per round, which don’t take into account the distance of putts. In 2010, Dufner ranked 181st out of 192 ranked players in total putting.

Could he really have putted better than anyone this week? Actually, no. He averaged 26 putts per round mostly because he hit only 12 greens per round but was close to the putting surface on a lot of those misses, using a putter from the fringe on some of those occasions (which doesn’t count as a putt under statistical standards). And his short-game shots around the green were very good.

In the third round, he had 25 putts—and faced only one putt longer than 13 feet all day. He even missed a putt from one foot, eight inches! By my method of comparing his results to the Tour average from the distance of each putt, he was about a half stroke worse than average in that round. Through the first 54 holes, he was five strokes worse than average on the greens.

He did putt very well in Sunday/Monday’s final round, with 23 putts. He was a stroke-and-a-half better than average that day, including a 36-footer on the 16th hole that was a key to him making the playoff.

For the week, Dufner holed out from off the green five times, the real key to his threatening to win. One of those was a 131-yard approach shot for an eagle during the first round, the other four were from around the green. ShotLink doesn’t tell us what club a player used, but it does show the position of the ball on hole graphics. Two of those were from right next to the green, and it’s nearly certain that he used a putter. The other two were from the intermediate cut but within seven yards of the hole.

Let’s give Dufner some putting credit for holing those two putts from the short fringe, both in the 15-to-20-foot range. That brings his putting up to something close to average—still an improvement on last year.

Factoring in those hole-outs, Dufner was 3-under par on the 24 holes where he missed the green in regulation! That’s four hole-outs, 19 up-and-downs, and only one bogey (he had a second bogey on a three-putt). Dufner’s bunker play was exceptional, getting up and down eight times in nine tries, which is awfully good for somebody who ranked 123rd in sand saves last year. He almost won the tournament with a bunker shot on the 72nd hole that grazed the edge of the cup before settling a foot away.

Dufner is still searching for his first victory, as the title went to Wilson thanks to a birdie putt from just under nine feet on the second playoff hole. A year ago, Wilson barely finished among the top 125 money winners. Now he’s the leading money winner through five weeks with wins in Hawaii and Phoenix, doubling his career total.

The slightly-built Wilson is a shorter-than-average (though not terribly short) hitter, so he needs to excel in other areas. In Phoenix, he excelled in every other area. He was a GIR machine, hitting 15, 15, 16, and 15 greens in the four rounds to lead the field with 61 of 72. That left him with fewer opportunities for short one-putts than those who missed more greens, but my analysis shows that he was five strokes better than average on the greens for the week—much better putting than Dufner.

Can Wilson keep it up? Frankly, he probably can’t. That’s too much to expect from a ninth-year player who has never bettered 44th on the money list. But he has certainly moved up to a different level. Wilson started the year 234th in the world ranking; he’s now 51st. The 36-year-old has only played in three major championships in his career; he’s now assured of spots in the Masters, U.S. Open, and PGA Championship and probably will make the British Open too. He’s also in “that match-play thing,” as he put it in a post-round television interview, referring to the WGC-Accenture Match Play in three weeks.

Wilson is one of the brightest, nicest guys on Tour, so it’s kind of a feel-good story, except that we don’t root for the underdog in golf as much as we do in other sports. A bigger feel-good story failed to pan out in Phoenix when Gainey, a one-time assembly line worker at a South Carolina factory, couldn’t keep the lead that he held through each of the first three rounds.

The man who graduated from the Golf Channel’s “Big Break” reality show, plays with a glove on each hand, lurches at the ball with a swing that is far from textbook, and has a refreshing down-home approach to the game took a two-stroke lead into the final round. Coming to the 17th hole, he was even par for the day and one stroke behind.

At that drivable par 4, he pulled his tee shot into the water hazard left of the green. No shame in that, really, but it turned into a sad story when he chunked his pitch shot after a penalty drop, watching it fail to clear the slope and roll back into the water. The resulting triple bogey dropped him into a tie for eighth place. A par at the 17th would have given him a solo third, and a bogey—which he would have gotten without the short-game snafu—would have put him tied for third.

It left Gainey with $164,700 instead of potentially $414,800 for solo third—serving as another example of how costly a wild drive at the wrong time and into the wrong place can be.